I have another interesting interview for you today. This time, I interviewed former MLB'er Billy Sample. Billy played in the majors from 1978-1986, mainly for the Rangers, but also spent time on the Yankees and Braves. He had a solid .272 lifetime average and, as you will see below, played with some amazing teammates. After his playing days were over, Billy became a broadcaster for various MLB teams, and he has also contributed to various media outlets. Now, let's get right to the interview. 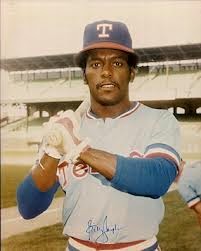 Matt: Who are some of the toughest MLB hitters and pitchers that you played against?
Billy: Seems to me, without checking the numbers, that my teams had trouble with George Brett and Paul Molitor. Additionally, did Harold Baines ever make an out in a clutch situation? I played against him in Rookie Ball and Instructional Ball in the minors and a number of years in the majors, and it was beyond uncanny, just how clutch he was; we all have our moments in the sun, but he seemed to bask in the sunshine. Not sure why Jack Morris is not in the Hall of Fame, sportswriters will point out to his high earned run average (3.90), which I think is so overrated. He only pitched against a DH lineup, unlike a number of the recent pitchers going into the hall, he averaged seven innings per start, which means he didn't leave the game to long relievers trying to get to the closer, and he was the winningest pitcher of the 1980s, oh, and he was on three World Series winners.

Matt: What is your fondest memory as a player?
Billy: Playing in the post season or winning a World Series would have been a fond memory, but I didn't experience either of those, so the career was relatively unfulfilled. I had one walk-off homer, in which we were trailing at the time of the connection, with two outs and a 3-2 count, against a good pitcher in Don Aase, but aside from that, there were just a lot of smaller elations. I made a few diving catches, and some of them I wasn't quite sure I could make the play, but I made it look natural :-) There is a YouTube of some my highlights.

Matt: What is the funniest thing that ever happened to you in your career?
Billy: Most of the funny stuff was off the field and you're too young to know most of it:-) Not sure if this is funny, but being a former infielder, I'd often take pre-game outfield and infield, and in one game in Atlanta, manager Chuck Tanner made a number of double-switches and I ended up at second base. I don't remember if I even had an infielder's glove, and umpire Jerry Crawford was laughing at me, though I was dead serious. Sure enough a double play grounder was hit to shortstop Andres Thomas and I ran to the bag to take the feed, Andres gave me such a look of disdain, as if I was making a mockery of the game, and he took the force-out himself, and threw to first to complete the double play. Thank goodness, I probably would have thrown the ball into the seats.

Matt: During your career, you played with some of the greatest players of the time like Fergie Jenkins, Bobby Bonds, Charlie Hough, Dave Stewart, Bruce Sutter, Rickey Henderson, Dave Winfield, Phil Niekro and Ron Guidry. Besides God-given talent, what are some of the other traits that these guys had?  [Note from Matt: Here's my interviews with Niekro, Henderson, Guidry and Jenkins]
Billy: Fergie had tremendous control, only pitcher with three thousand or more strikeouts and fewer than a thousand walks, and was a great teammate. I used to stand in and bat against Charlie's knuckleball in the cage, thinking that it might help me against Niekro's knuckleball, but it didn't help. I was a teammate with Phil however, when he picked up career victory number 300 in Toronto in which he threw only one knuckleball and that was the last pitch of the game. Dave Stewart didn't become the dominant pitcher he became until he mastered the split-finger. He always had good velocity, but didn't have anything off-speed, and would get hit hard. Rickey was going to Arizona State on a football scholarship, but the baseball scout and Rickey's mother wanted him to play baseball, so they manipulated him towards baseball. His football leg strength enabled him to take leads and steal bases in a manner that many of the rest of us couldn't. Bruce Sutter, as a lot of baseball people, will crush your hand in a handshake, he might even hurt your hand in a fist-bump:-) Ron Guidry plays the drums and had a drum set in the basement of Yankee Stadium, I was invited for a couple of sessions, though I looked rather inept trying to use my feet and hands at the same time on the drums. And Dave Winfield is one of the smartest, eclectic people I have met. I teased him about using words at a negotiating meeting between management and our union, in which I had to run home and grab a dictionary to research the connotations of certain words.

Matt: You've been a successful broadcaster for a long time now. What's the most memorable event that you've ever broadcast? If you could've broadcast any event in baseball history, what would it be and why?
Billy: I had the middle three innings on Angels radio when Kenny Rogers of Texas threw a perfect game against the Angels, in fact, I have seen four perfect games; one of them as a player when Mike Witt threw one against us (Texas) on the last day of the 1984 season. I saw Mike that off-season and he said, he thought either Buddy Bell or I might have pinch-hit late in the contest. That was a nice compliment, I hit Mike fairly well, but he wasn't the kind of pitcher that players were running into the batter's box to face. Over my twenty year span of broadcasting, I have had the opportunity to work with some of the greats, Pete Van Wieren, Dave Niehaus, Skip Caray, Bob Carpenter, Gary Thorne, Dave Van Horne, Ernie Harwell, Jim Hunter, Brian McRae, Russ Langer, Tim McCarver and many others, and it has been a treat.

Matt: Do you have any tips for aspiring (a) MLB players and (b) broadcasters?
Billy: Tips for players? Not much is a substitute for hard work. Scouts are looking for potential major league skills and talents, major league bat, speed, arm, glove, power, and yet, if you don't have an excess of those attributes, have a large portion of something that can't be measured ... heart. I would pay to watch Dustin Pedroia play, and I'm not sure if he measured high on any of the charts, but he has won an MVP and a couple of World Series ... Tips for broadcasters, well, I didn't come by it the traditional way, but practice and practice describing what's in a scene. Almost everyone I've spoken with has taken a tape recorder to a game, sat in the bleachers and called the game. If one can do that proficiently, then it'll be even easier when press box notes are available.

Well, anyway, that's the interview. Thanks so much to Billy Sample for his really great answers, and a shout-out to Marc Smilow (dad of fellow MLB Pro Blogger Haley Smilow, age 13) who set up the interview. And come back again real soon for more of "all the buzz on what wuzz."
Posted by Matt Nadel at 3:53 PM