The 2010s are officially coming to a close, so let's examine some of the best seasons of the decade by individual players! Note: these seasons might not be the ultimate best, but they're ones I'd like to shout out.

Joey Votto, 2010
Votto's NL MVP 2010 season put him on the map for what would end up being the entire decade. He made his first of six career All Star Games and set career highs in home runs (37) and RBIs (113). He also made his impressive on-base percentage numbers known, leading the NL in 2010 with a .424 OBP, his first of four consecutive seasons leading the league in the category.

Justin Verlander, 2011
Your 2011 AL Cy Young Award and MVP winner sure did have a season to remember in '11, winning the pitching Triple Crown and leading the Tigers all the way to the ALCS. His 24 wins and 2.40 ERA that season are both career highs.

Miguel Cabrera, 2012 and 2013
Arguably the best player in baseball for the first half of the decade, Cabrera became the first hitting Triple Crown winner since Carl Yastrzemski in 1967 and again won the batting title in 2013. He was a back-to-back MVP, averaging 44 homers, 138 RBIs, and a .338 batting average over that two-year stretch. The 2012 World Series alluded him, but that doesn't detract from his Hall of Fame candidacy in the slightest. 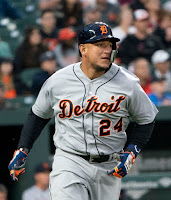 Clayton Kershaw, 2014
The second same-season Cy Young and MVP of the decade was Clayton Kershaw in '14 and, boy, was he unstoppable. 21-3 record. A 1.77 ERA. 239 strikeouts. If only he performed better in the postseason.

Max Scherzer, 2016
The 2016 Cy Young Award recipient continued his Hall of Fame campaign with 20 wins and a 2.96 ERA. What's amazing about this year for Scherzer is that it definitely wasn't his best, but he won the Cy Young anyway. It just goes to show you how good Mad Max really is.

Jose Altuve, 2017
Aaron Judge and Giancarlo Stanton deserve acknowledgements as well, but the best second basemen of at least the second half of the 2010s deserves just as much praise. Altuve only had 204 hits this year, but that number and his .346 batting average both led the AL. The Astros' first World Series championship cements this season as one of the best in Houston's history.

Christian Yelich, 2018
Remember when we thought Yelich was just fine on Miami? Well, he elevated his game to astronomical levels in Milwaukee. In his first season with the Brew Crew, Yelich led the league with a .326 batting average, while also collecting 36 homers and 110 RBIs. He became one of the best hitters in the league after showing little power for the first few years of his career with the Marlins.

Mike Trout, 2019
You thought I'd leave Trout off this list, didn't you? The 2019 MVP set a career high in home runs (45), while also leading the league in OPS (1.083). He was a shoe-in for MVP from the beginning of the season, only because he's always a shoe-in. Let it be known that Mike Trout was the best player of the 2010s. The funny part about that statement is that he didn't play in the entire decade. Who knows what he'll do in the 2020s?

Thanks for reading this post and I hope you enjoyed it. Check back soon for more of "all the buzz on what wuzz." Happy New Year everyone!
Posted by Matt Nadel at 1:19 PM No comments:

Vin Scully is arguably the most recognizable voice in baseball history. His sweet tone entertained Dodgers fans for well over half a century, producing some memorable sound bytes in the process. But a different voice that's almost as long-lived as Scully's continues to fill the Los Angeles air today, except this voice fills the air not with English, but with Spanish.

This post is devoted to Jaime Jarrin, the Spanish play-by-play broadcaster of the Dodgers since 1959. He was the Ford C. Frick Award winner in 1998, an award given to the broadcaster who has made major contributions to baseball. Since Scully retired in 2016, Jarrin is the longest-serving MLB broadcaster, but Jarrin wasn't always a baseball fan. Most broadcasters grew up listening to ballgames and honing their craft from a young age, but Jarrin came to the US from Ecuador in 1955 without ever watching a single game of baseball. When the Dodgers moved to LA in 1958, he was working at KWKW, the radio station that coincidentally acquired the rights to broadcast the Dodgers in Spanish. The stars aligned and Jarrin became "la voz" of the Dodgers.

Jarrin's contract is up after the 2020 season, so we might be seeing the end of one of the greatest careers in baseball broadcasting. But either way, I love what Jarrin does for the Spanish-speaking community of Los Angeles, allowing them to enjoy baseball as much as any English-speaker. I just wish more people knew of Jarrin before because I only found out about him this year on a random googling spree of broadcasters. But it just goes to show you how the unsung pioneers of baseball are just as revolutionary as the more famous ones. Thank you, Jaime Jarrin, for everything you're doing for Spanish-speaking baseball fans and for baseball fans alike.

Thanks for reading this post and I hope you enjoyed it. Check back soon for more of "all the buzz on what wuzz."
Posted by Matt Nadel at 1:59 PM No comments:

They got Simmons and Miller right
I predicted Ted Simmons getting into the Hall and he deserves every bit of his induction in July. The eight-time All Star catcher from the 1970s and 1980s didn't seem to be hindered by the possible Thurman Munson comparisons, as the Cardinals and Brewers great ended up with 13 of the 16 possible votes.

I didn't talk about Miller in my Hall of Fame predictions post because he wasn't a player, but that doesn't mean he couldn't relate to the players. Marvin Miller was the first ever Executive Director of the Major League Baseball Players Association, turning it into one of the strongest unions in the United States. His influence on player culture was felt heavily as player contracts exploded throughout the 1970s due to free agency. There's a reason why the biggest stars in baseball today are paid so much and that reason is Miller. He received the minimum amount of votes (12 out of 16) required for induction, but that doesn't mean he wasn't as revolutionary to baseball as any other MLB pioneer.

No one else came close
Dwight Evans and Dave Parker were third and fourth, respectively, in terms of most votes on the Modern Era ballot. I thought that Parker had at least a shot, but didn't think Evans had the stats. I'm surprised that these guys were considered by barely half of the voters because they really were both great players. Dale Murphy, however, rightfully deserved little to no Hall of Fame consideration.

Steve Garvey deserved more than six votes
I was SO CONFIDENT in Steve Garvey getting into the Hall of Fame, but he ended up with only six votes in his favor, the same amount as Lou Whitaker! No offense to Sweet Lou, but Steve Garvey deserved at least twice the amount of votes that he got. He's a Southern California baseball treasure, having collected numerous accolades and accomplishments with both the Dodgers and Padres.

The Yankees got no love
Thurman Munson, Don Mattingly, and Tommy John all had interesting shots at making the Hall this year, but all three got absolutely destroyed by the voters. I had my faith in John, but was really quite surprised to hear that he didn't get a lot of love from the Committee.

Who do you think should've gotten into the Hall via the Modern Era Committee this year? Leave your thoughts in the comments section below. Thanks for reading this post and I hope you enjoyed it. Check back soon for more of "all the buzz on what wuzz."
Posted by Matt Nadel at 2:12 PM No comments: