Finally, Alan Trammell is in the Hall of Fame! For the first time, my annual Alan Trammell appreciation post won't be one of yearning, but one of celebrating! Let the confetti rain down!

For those of you who are confused, let me explain: Alan Trammell was a shortstop for the Tigers in the 1970s, 1980s, and 1990s and me and him happen to share a birthday: February 21st. For almost every year that I've blogged on my birthday, I've pleaded for Trammell to be elected into the Baseball Hall of Fame. The reason is that without Trammell, I would have no Hall of Fame birthday buddy (yes, former Red Sox owner and HoFer Tom Yawkey does share a birthday with me as well, but it's not the same). And it's not like Trammell hadn't been deserving of induction; he was a six-time All Star, four-time Gold Glover, three-time Silver Slugger, and 1984 World Series MVP. It just took him a little longer to get in than he deserved.

For 15 straight years on the BBWAA ballots, Trammell never got higher than 40.9% of the vote, roughly 34% less than what he needed to join his fellow All Stars in Cooperstown. But the Veteran's Committee thought otherwise because just this past December, Trammell and former teammate Jack Morris were voted into the Hall by the VC. When I watched Hall of Fame president Jeff Idelson formally announce Trammell's introduction to the Hall of Fame, I was ecstatic. I finally have a Hall of Fame birthday buddy! I can't wait to watch his induction speech in July.

And, here's a bonus: my live interview with Alan from 2015. Just click here.

Who's your Hall of Fame birthday buddy? Tell me in the comments section below. Thanks for the birthday wishes and for reading this post. I hope you enjoyed it and check back soon for more of "all the buzz on what wuzz."
Posted by Matt Nadel at 10:40 AM No comments:

Pitchers and catchers report to Spring Training today and I couldn't be more excited for baseball to be back! My mind has been going nuts without baseball and, because of my insanity, I've garnered a lot more baseball knowledge just out of the boredom I've had to endure due to a lack of America's pastime. Naturally, the team I've researched the most is the Yankees, so without further delay, here are seven super rare fun facts about the New York Yankees. 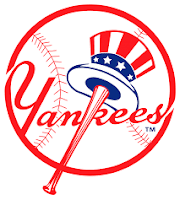 Fact #1
The Yankees have won 40 American League pennants in their history, the most of any team. But we can go deeper than that, right? Well, let's try. Even before MLB expansion started in 1961, the Yanks had beaten all eight original National League teams in the World Series at least once. Since expansion, the only NL team that has been to any World Series that New York has yet to face there is the Rockies. (The Nationals and Brewers haven't been to the Fall Classic as NL teams yet.)

Fact #2
The Bronx Bombers have finished last in their division only four times in their 115-year history and have yet to finish last since the American League expanded to three divisions back in 1994.

Fact #3
Including the postseason and in terms of winning percentage, the 1927 Yankees are the best AL team of all time; they posted a regular season record of 110-44 and swept the World Series for a total winning percentage of .721.

Fact #4
The Yankees' worst seasonal attendance, according to the team's official website, came in 1906. In their fourth year of existence, the Yanks only brought 35,500 fans to the ballpark, which is a shame because they finished the season at a very respectable 90-61.

Fact #5
Nick Swisher was a fan favorite for the Yankees from 2009-2012, bringing a very chill vibe to the clubhouse and a productive bat to the batter's box. However, after the 2012 season, he decided to sign with the Indians and the Yankees got a compensatory pick at the end of the first round of the 2013 MLB Draft in exchange for Swisher's services. Who did they use this pick on, you ask? Aaron Judge.

Fact #6
Since interleague play began in 1997, there is actually only one NL team that the Yankees have played against in more than 20 games and have lost in those games more times than they've won: the Phillies (13-14). Ironically, the Phillies have the most all-time losses in baseball history at 10,837.

Fact #7
I am one of three people in my family born during a year in which the Yankees won the World Series! My cousin Max and I are born five days apart in 1999 (Yanks swept the Braves) and my mom's mom was born in 1941 (Yanks over Dodgers in five).

I hope you learned a thing or two about the greatest baseball franchise in history. Oh, you want to make the claim that the Yankees won most of their World Series before free agency? Well, here's a bonus fun fact for you: in the Super Bowl era (since 1967), New York has won seven World Series, the most of any team during the time period. Anyway, thanks for reading this post and I hope you enjoyed it. Check back soon for more of "all the buzz on what wuzz."
Posted by Matt Nadel at 3:40 PM 1 comment:

Because the Super Bowl is today, everyone is comparing the New England Patriots and Philadelphia Eagles to predict who will win the game. I, however, have a different technique. Instead of looking at these two teams in depth, I looked at their MLB counterparts to see which of those teams is better. So, who's better, the Red Sox or the Phillies? (Disclaimer: this is not my actual Super Bowl prediction. It's just a funny way to compare two MLB teams on a historical perspective.)

Category One: Overall Winning Percentage
During Boston's 117-year history in Major League Baseball, they've won an astounding 9,410 games and have only lost 8,776 games for a winning percentage of .517. Meanwhile, the Phillies have an all-time record of 9,664-10,837 for a winning percentage of only .471. After category number one, the Red Sox are up, 1-0 over the Fightin' Phils.

Category Two: Head-to-Head Winning Percentage
These two teams squared off in the 1915 World Series, with the Red Sox beating the Phillies easily in five games. Besides that series that was more than 100 years ago, the two squads have faced each other in interleague play many a time. In their 63 matchups, the Red Sox have won 39 of them. After two categories, Boston's up two on Philly.

Category Three: Hall of Famers
These two clubs have been around for more than a century each, so they each have plenty of Hall of Famers to go around. There are 14 Hall of Famers who wear the Red Sox logo on their cap in their Cooperstown plaques, including legends such as Ted Williams and Jimmie Foxx, while the Phillies can only claim that distinction for six Hall of Famers. So Boston is now up 3-0, meaning that with one more categorical victory, the BoSox will secure the Patriots' sixth Super Bowl.

Category Four: World Series Championships
What better way to determine which of two teams is better than by looking at how many times they've won the big one. The Phillies didn't win their first World Series until 1980 and have only won one other since (2008). The Sox have won eight World Series, despite their 86-yearlong drought. Well, that settles is. Sox win, 4-0.

Sorry Eagles fans, but it looks like the Patriots will win Super Bowl LII. Maybe next year the Eagles will face the Texans or Chargers in the Super Bowl, because the Astros and Angels have less World Series championships than the Phils. Anyway, thanks for reading this post and I hope you enjoyed it. Check back soon for more of "all the buzz on what wuzz."
Posted by Matt Nadel at 10:46 AM 1 comment: