February 25 may not take place during the regular season, but surprisingly, some very important events happened for Major League Baseball on its administrative side on this date, so let's talk about those events!

1957: The NFL waged war with its fellow football leagues for many years and even became involved in a big antitrust lawsuit that went all the way up to the Supreme Court in 1957. The Supreme Court ended up ruling that the NFL was in fact subject to antitrust laws, meaning that they couldn't monopolize organized football. This ruling, which was made on February 25, 1957, made it official that the MLB is exclusively exempt from antitrust laws. Pretty interesting!

1981: On February 25, 1981, the Players' Association voted unanimously to strike on May 29th if free agent compensation wasn't changed. The strike actually started on June 12th, but still erased more than a third of the MLB's scheduled games that season. This is so significant because it was Major League Baseball's first major strike and wouldn't be its last.

February 25 certainly changed baseball in a multitude of ways. It just goes to show you how even during the offseason, make sure you read those article headlines, because you could miss some league-shattering news.

Bonus Event (1972): This event isn't related to baseball's behind-the-scenes endeavors, but still impacted baseball in a major way. On February 25, 1972, the Cardinals traded Hall of Fame pitcher Steve Carlton to the Phillies. Carlton would go on to win four Cy Young Awards with Philadelphia and even helped them win their first World Series in franchise history in 1980. If Carlton played for better teams throughout his career, he might've gotten close to 400 career wins!

Thanks for reading this post and I hope you enjoyed it. Check back soon for more of "all the buzz on what wuzz."
Posted by Matt Nadel at 2:21 PM No comments:

Tomorrow is my 20th birthday! Usually, in the history of Baseball with Matt, my birthday post is about Alan Trammell, Hall of Fame shortstop and 1984 World Series MVP for the Detroit Tigers, as well as my birthday buddy. But this time, I'm going to shed some light on Trammell's longtime teammate and double play partner, Lou Whitaker!

Second baseman Lou Whitaker played his entire career with the Tigers from 1977-1995. The 1978 AL Rookie of the Year Award recipient totaled five consecutive All Star Games from 1983-1987, three Gold Gloves at 2B, and four Silver Slugger Awards. He batted .285 or above in eight seasons and is 78th on the all-time WAR list with a 75.1 career WAR. Trammell and Whitaker hold the record for the longest-lasting double play combination in MLB history; the two both started playing on a full-time basis in 1978 and ended their partnership due to Whitaker's retirement following the 1995 season.

Because Whitaker played his entire career in the Motor City, he is in the top five for a number of Tigers records, including career double plays (1st with 1,527), career walks (2nd with 1,197), and career runs scored (4th with 1,386). His uniform number (he wore #1) has not been retired by the Tigers yet, but there's no doubt that he's a franchise favorite, especially considering he was part of the last Tigers championship team in 1984. However, his Hall of Fame candidacy is much less debated. In his first year of eligibility in 2001, he was kicked off the BBWAA ballot by not receiving the required five percent to stay on it for the next year. Fellow teammates Trammell and Jack Morris did get in via the Veterans Committee, but Whitaker will have to wait until at least 2021 to even be considered by the applicable committee within the Veterans Committee.

No matter what happens with Whitaker and the Hall of Fame, I will still say that he was a great player and should be forever remembered in Tigers lore. Thanks for reading this post and I hope you enjoyed it. Check back soon for more of "all the buzz on what wuzz."
Posted by Matt Nadel at 1:05 PM No comments:

I don't usually do posts to honor a baseball personality after their death, but I'm making an exception here. Hank Aaron, Willie Mays, and Ernie Banks were some of the best sluggers of the 1950s, but there was an unsung hero who was flourishing just as much as them at the time and continued his success up until his final seasons. I am of course talking about the late Frank Robinson.

Robinson played for 21 years from 1956-1976 with the Reds, Orioles, Dodgers, Angels, and Indians. During his Hall of Fame career, he made 14 All Star Games and hit 30 or more home runs in eleven seasons. The 1956 NL Rookie of the Year Award recipient started off his career with Cincinnati, where he averaged 101 RBIs a season during his ten years there. His best season with the Reds was in 1961, when he won his first MVP award en route to leading Cinci to the World Series, collecting 37 home runs, 124 RBIs, a .323 batting average, and a league-leading slugging percentage of .611 during the regular season. In fact, 1961 was the second of three consecutive years that Robinson led the NL in slugging.

After the 1965 season, the Reds didn't feel Robinson's services were required anymore, considering he was "an old 30" at the time. So, he was traded to the Baltimore Orioles in December of 1965. Big mistake. Robinson would go on to win the Triple Crown in 1966, leading the American League in homers (49, a career high), RBIs (122), and batting average (.316). Robinson's heroic efforts landed him his second career MVP award, becoming the first player in MLB history to win the MVP in both leagues. However, unlike his 1961 Reds, who lost the World Series to the Yankees, his 1966 Orioles won the Fall Classic over the Dodgers in a clean sweep. Robinson also won the 1970 World Series, again with the O's.

In 1975, at the age of 39, Robinson became the first African-American manager in baseball history when he became the player-manager of the Indians. In his debut game, he penciled his name into the lineup card as a DH and then hit a home run! In addition to the Indians, he had stints as the manager of the Giants, Orioles, and Nationals.

Robinson retired from playing in 1976 and finished his career with incredible stats. Today, his 586 home runs rank tenth on the all-time list and his 1,812 RBIs rank 21st. He was elected into the Hall of Fame in 1982, his first year of eligibility, with 89.2% of the vote. Thank you, Frank, for all you provided for the game. You will be dearly missed. 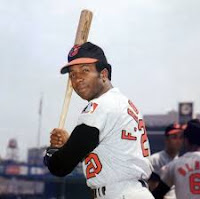