We are nearing the end of the 2018 MLB regular season and although the AL seedings have been pretty much decided, the NL is completely crazy. It's so crazy that we could see a four-to-five team tie for the Wild Card spots! That would require a bevy of tiebreakers and although the tiebreaker I'm about to describe wasn't as insane in terms of participating teams, it's much more insane in terms of magnitude.

The year is 1978. The Yankees are coming off a World Series championship in 1977 and are looking to repeat as MLB champs. But the Red Sox have other ideas. Thanks to an MVP season by Hall of Famer Jim Rice and yet another solid campaign from Carlton Fisk, the '78 Sox were in the driver's seat for a majority of the season in the AL East. In fact, in mid-July, the Yankees were 14 games back of Boston for the AL East crown! Why do I sound so worried about my Yanks at this point, you ask? Well, in 1978, Major League Baseball hadn't implemented the Wild Card yet, so it was either a team won the division or didn't make the playoffs.

But New York mounted a furious comeback, going 53-21 in the team's final 74 games, while Boston only went 38-36. The highlight of this comeback was a Yankees four-game sweep of the Red Sox at Fenway late in the season. The Yankees outscored the Red Sox 40-9 over the four contests and the series was dubbed "The Boston Massacre" by the press. By season's end, both rivals were tied for the top position of the AL East, meaning that for the first time since 1948, a playoff game would be played to decide who would make the playoffs.

Game 163 did not start off the way the Yankees had planned, despite having 1978 AL Cy Young award recipient and 24-game winner Ron Guidry on the mound. Hall of Famer Carl Yastrzemski led off the bottom of the second with a homer and Rice hit an RBI single to center field in the sixth. But in the top of the seventh, things started to look up for the Yankees. With two runners on base, Bucky Dent, a contact-hitting shortstop who had hit only five homers the entire season, smacked a ball over the Green Monster, giving the Yankees a 3-2 advantage! Thurman Munson doubled later in the inning, scoring Mickey Rivers, and Hall of Famer Reggie Jackson led off the top of the eighth with a homer to essentially clinch the game for the defending champs. The Red Sox rallied off Goose Gossage in the bottom of the eighth to make it look closer, but the Hall of Fame reliever eventually closed the game for the Yankees, giving them their third consecutive AL East title. The final score was 5-4. 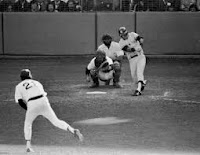 Bucky Dent, who is now referred to as this game's hero, also ended up winning World Series MVP. So indeed, the Yankees did go back-to-back in the Fall Classic. It would be their last championship before an 18-year drought. Thanks for reading this post and I hope you enjoyed it. Check back soon for more of "all the buzz on what wuzz."
Posted by Matt Nadel at 5:13 PM No comments:

Let's look at the 2017 season as an example for understanding how the stat is actually implemented.  The 2017 Red Sox scored 785 runs and allowed 668 of them. Plug those numbers into the Pythagorean expectation formula and you get a winning percentage of .573. Multiply that by 162, the amount of games in an MLB season, and you get that the BoSox should've won 93 games in 2017, which they actually did. The 2017 Yankees, on the other hand, should've won 100 games according to the formula, but instead only won 91. Now, does this mean that the formula is faulty? Maybe, but it could also mean that the Yankees were just unlucky. The same thing goes for the 2017 Indians, who should've won 108 games in '17 but only won 102. Then you have a team like the 2017 Padres, a team that should've won only 59 games according to the Pythagorean expectation formula, but actually won 71 games.

So, why is this formula good to use in order to judge the prowess of MLB teams? Well, I've always been a big fan of run differential and this statistic uses exactly that to determine how good a team is. This same formula using different exponents is also used in the NFL, NBA, and NHL, so you know it's valid. After all, it was created by the great Bill James (pictured below). In conclusion, I may be old school when it comes to stuff like sabermetrics, but this new way of looking at teams is really quite interesting.

Thanks for reading this post and I hope you enjoyed it. Check back soon for more of "all the buzz on what wuzz."
Posted by Matt Nadel at 4:57 PM 14 comments:

It's time for the epic conclusion to my summer-long series to tell you all my top 50 Hall of Fame hitters in baseball history! And it's also time for the real scrutiny to come my way, so let's get to it!

#10: Rogers Hornsby
The first real National League power hitter is actually on this list for a different reason: his .358 career batting average ranks second all time. In fact, he is only one of three hitters ever with a lifetime batting average above .350. He even batted .424 in 1924, which is the highest single-season batting average of the World Series era!

#9: Jimmie Foxx
"Double-X" sure knew how to hit when power was so primitive in baseball. He represented the AL in the All Star Game in the first nine years of the Midsummer Classic, won three MVPs, and was the second ever member of the 500 home run club. His 534 homers rank 19th on the all-time list and his .325 lifetime batting average and 1,922 career RBIs aren't bad, either.

#7: Honus Wagner
The Flying Dutchman terrified National League pitching at the beginning of the 20th century, batting .328 lifetime to go along with 3,420 career hits. The eight-time batting champ and four-time OBP champ is part of the first ever Hall of Fame class in 1936.

#6: Stan Musial
24 gosh darn All Star Games and the fourth-most hits in baseball history will definitely put you at #6 on this list. Stan the Man batted .331 lifetime and also drove in 1,951 runs during his career, the eighth-highest RBI total in baseball history.

#4: Ted Williams
Let the hate comments roll in! First, let's talk about why Teddy Ballgame was so great and then we can talk about why he isn't "the greatest hitter that ever lived." 19 All Star Games. 1,839 career RBIs. 521 career home runs. A .344 lifetime batting average. The best OBP of all time at .482. 2,021 career walks. The last man to hit over .400 in a season. All of that is great, don't get me wrong, but do you really mean to tell me that the "greatest hitter that ever lived" isn't even in the top ten for career hits or home runs? The Splendid Splinter is definitely great, but he doesn't deserve the number one spot in this countdown.

#3: Ty Cobb
The Georgia Peach may have played in a different era, but his stats are undeniably off the charts. His .366 batting average ranks as the best batting average ever and his 4,189 hits rank number two on the all-time list. From 1907-1919, he won 12 of 13 batting titles, batting over .400 twice. Surprisingly, he also has a high RBI total, as his 1,944 RBIs are ninth all-time.

#2: Hank Aaron
The 25-time All Star is quite simply the best hitter of the second half of the 20th century and for three simple reasons:

That's all I need to say about Hammerin' Hank.

#1: Babe Ruth
Honestly, who else? A .342 batting average. 2,214 career RBIs. 714 career dingers. The highest slugging percentage in MLB history at .690. Won the AL home run title 12 times in a 14-year span. Per season with the Yankees, he averaged 44 home runs and 132 RBIs. But most of all, he ushered in the Live Ball era, changing the game forever. His transcendence is the real reason for why he's number one and I will never change my opinion regarding this decision. He's just plain revolutionary.

The list is finally finished! Thank you to everyone for reading this series throughout the summer, but what did you think of it in its entirety? First of all, do you agree with my picks and second of all, would you like to see another series like this in the future? Leave your thoughts in the comments section below and, as always, check back soon for more of "all the buzz on what wuzz."