We're coming down to the final month of the 2019 MLB regular season and playoff seedings are starting to shape. However, as the great Yogi Berra said, "it ain't over 'til it's over." About eight years ago, a comeback in historically one of the most competitive divisions in MLB history shocked the sports world, making the 2011 AL Wild Card race one to remember.

It was September 1, 2011. The Red Sox were nine games up on the Rays in the American League Wild Card race, with the Yankees leading the AL East. The Sox were expected to do well in 2011, having acquired veteran All Stars Adrian Gonzalez and Carl Crawford (from Tampa) in the offseason. The Rays were three years removed from their first AL pennant in team history, with much of the same core still on the roster, including all-time great member of the Rays, Evan Longoria, and the since-added 2010 AL Cy Young runner-up, David Price. Boston had actually led the AL East for much of the year, only to relinquish it to the Yankees late in the season. But as I said before, by September 1, they had the only AL Wild Card spot pretty much locked up. Remember: the Wild Card Game wouldn't debut until 2012, so there was one Wild Card team per division at this point in the history of baseball.

But the Red Sox caught the injury bug and had massive pitching issues during baseball's final month. Meanwhile, the Rays soared into autumn, with the help of hitters such as the versatile 2015 World Series MVP, Ben Zobrist, Melvin Upton Jr., Casey Kotchman, and Matt Joyce, among others. Their pitching was also incredible. Price, James Shields, and Jeremy Hellickson all had ERAs south of 3.5. By the time the final series of the season arrived, the Sox still controlled their own destiny, but would need to come up clutch against the Orioles to seal the deal. Elsewhere, the Rays would have to take down the division-winning Yankees if they wanted a chance at the World Series for the second time in franchise history.

It came down to Game 162, with both teams tied at 90 wins. The Yankees looked to be ending the Rays season, leading 7-0 entering the bottom of the eighth at Tropicana Field in St. Petersburg. The Red Sox, playing in Baltimore, also had a lead entering the later innings at 3-2. In Tampa, the Rays magically scored seven runs in the final two innings, thanks to a three-run shot by Longoria in a six-run eighth and a game-tying solo shot by Dan Johnson in the ninth. In extras, Longoria finished off the game with a walk-off homer in the twelfth that just snuck over the left field wall, giving the Rays 91 regular season wins. The Sox and O's had been in a rain delay, so whatever happened in Camden Yards was out of the Rays' control. But miraculously, the Orioles scored two in the ninth, the second one on a botched sliding attempt by Crawford in left, giving the Orioles the win and the Rays the AL Wild Card spot.

So, what does this show you? Anything can happen when the playoffs are on the line. Thanks for reading this post and I hope you enjoyed it. Check back soon for more of "all the buzz on what wuzz."
Posted by Matt Nadel at 5:25 PM No comments:

Mike Trout just celebrated his 28th birthday! I know I'm the one guy who doesn't want to include him in the conversation for "Best Hitter Ever," but it's only because he hasn't played that long. But if he continues at his current pace, he will surely have a better career than the hitter who is always compared to him, Mickey Mantle!

Hall of Fame centerfielder Mickey Charles Mantle played from 1951-1968, all with the Yankees. In fact, he's on the Yankees' Mount Rushmore, along with Babe Ruth, Lou Gehrig, and Joe DiMaggio. Not only is he good enough to be alongside those greats, but his career overlaps DiMaggio's (1951), whose career overlaps Gehrig's (1936-1939), whose career overlaps Ruth's (1923-1934). Mantle and DiMaggio played in the outfield together during the 1951 World Series, when Mantle injured his knee while moving away from a Willie Mays fly ball that DiMaggio was ready to catch. It was the start of a string of injuries that prevented Mantle from becoming one of the all-time greats. He actually played his entire career with a torn ACL! But let's get to the numbers he did put up.

During his prime from 1951-1964, Mantle had a .309 batting average, along with 32 homers, 93 RBIs, and 144 hits per season. His career batting average dipped to .298 by the end of the '60s, but Mantle still finished his career with 536 homers and 1,733 RBIs. He was the sixth member of the 500 Home Runs Club and that home run mark currently sits as the 18th-highest mark for an individual hitter in baseball history. Mantle was also a master of OBP, leading the league in walks five times and on-base percentage three times. His .421 career on-base percentage is good for 18th on the all-time list.

But Mantle was all about the dingers. He hit 30 or more homers in eight straight seasons from 1955-1962, with a couple of milestones along the way. In 1956, Mantle led the league with 52 homers, 130 RBIs, and a .353 batting average, his only career batting title. In other words, Mantle hit for the Triple Crown in '56, winning his first of three AL MVP Awards and his fourth of seven World Series championships with the Bronx Bombers. In 1961, Mantle and teammate Roger Maris took part in a historic race to catch Babe Ruth's record of 60 single-season home runs. Mantle finished with 54 out-of-the-parkers, while Maris topped the record, hitting 61 homers. Mantle still finished second in MVP voting that year, also leading the league in slugging at an astounding .687 mark. In fact, Mantle is 18th (again with the "18!") on the all-time slugging percentage list with a lifetime slugging percentage of .557. 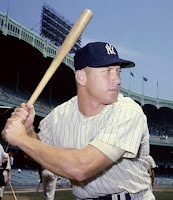 Mantle got his nickname, "The Commerce Comet," from his fiery bat and his hometown of Commerce, Oklahoma. Mike Trout is from Millville, New Jersey, which explains his celestial nickname, "The Millville Meteor." I'm excited to see what Trout can do for the next several years, but for now, let's admire the statistics of the greatest guy to wear the #7 in Yankees history. Thanks for reading this post and I hope you enjoyed it. Check back soon for more of "all the buzz on what wuzz."
Posted by Matt Nadel at 7:19 PM No comments: