Even in a shortened 2020 season, we are sure to see some crazy home run numbers across Major League Baseball, a trend that will only continue to pick up as we advance deeper into the 21st century. But with an emphasis on power comes the slow demise of one of baseball's most underrated and exciting statistics: the stolen base.

Most baseball fans like to think that base-stealing was always as common as it was right before the new millennium, but that's actually incorrect. Maury Wills and Lou Brock were the first consistently excellent base-stealers, regularly crushing the rest of the league in the category throughout the 1960s. But it was "Larcenous Lou" who oversaw the true rise of the stolen base in the 1970s. In 1975, Jerry Remy of the Angels and Jose Cardenal of the Cubs tied for tenth place in baseball in steals with 34 each. In 1976, Freddie Patek of the Royals came in tenth in steals with 51 of them. From 1976-1998, there were only two seasons (besides strike-shortened ones) in which the tenth-best stealer had less than 40 steals, a phenomenon that hasn't happened in baseball since 2006 (Alfonso Soriano, 41, Nationals). What's also important to note is that from 1976-1998, four hitters made it to the 500 Home Run Club (Hall of Famers Willie McCovey, Reggie Jackson, Mike Schmidt, and Eddie Murray) but from 1999-2015, twelve hitters accomplished the feat.

With this information, I wouldn't go as far to say that homers and stealing bases are antitheses of each other, but it is certainly fair to say that the long ball and small-ball aren't not opposites. That's why it makes sense that hitters are stealing less bases and hitting more home runs in modern baseball, but is this good? Does it make sense? Analytically, at least, yes. Hitting a home run is the quickest way to score a run in a baseball game, and sure, a team is more likely to score if there is a runner on second versus one on first, but having more players involved in a run-scoring opportunity makes a team less efficient statistically. But why is base-stealing still important? To answer that question, I'm going to drop some business vocabulary, so hold on to your briefcases.

A competitive advantage is a proportionate advantage of one entity over another. In the business world, a company that can manufacture a product in a cheaper way than other companies has a competitive advantage in that market. That company isn't unstoppable in that market necessarily, they're just better-equipped. The same thing goes for teams with more base-stealers. As baseball moves more and more into the power department, pitchers and catchers will be trained to be less and less worried about steals. It might be purely psychological, but it'll happen. This would let base-stealers feel more comfortable on the base paths and will collect stolen bases exponentially. Based on WAR, stolen bases might still be inferior to home runs in this future speedy utopia I'm describing, but always remember Syndrome's quote from The Incredibles: "If everyone's super, no one's super." In other words, if every team is trying to win in the same way, the team that will prevail is the team that's winning differently, the team that emphasizes batting average and OBP to reach base, the team that drives pitch counts through the roof, the team with a competitive advantage.

Posted by Matt Nadel at 1:07 PM No comments:

Thus far into the abridged 2020 MLB season, it seems that former and present members of the Colorado Rockies (DJ LeMahieu and Charlie Blackmon) are some of the best hitters in baseball in terms of batting average. DJ is now on the Yankees, but when he played a mile above sea level, he did, in fact, win a batting title. But why are hitters on the Rockies so good? The answer is simple, and I kind of already hinted at it when I said "a mile above sea level." That's right: it's the Coors Effect.

Denver, Colorado is one of the highest cities in the United States and is also where the Colorado Rockies home ballpark, Coors Field, is situated. This high altitude means that balls hit within the confines of the field travel farther, due to less air density. When Coors Field opened in 1995, the builders were aware of this natural phenomenon, so the field was made with some wide dimensions. But if anything, this just keeps the caverns in between the outfielders open for business. In 2019, Coors Field had the highest park factors in terms of hits, runs, and home runs, meaning that when pitchers pitch there, the ballpark has more to do with their failures than at any other stadium. This works both for and against the Rockies, and here's how. The Rockies lineup has always been full of All Stars. LeMahieu and Blackmon are just the tips of the iceberg, because the current lineup also has hitters like Trevor Story, David Dahl, and my favorite player in baseball, Nolan Arenado. Historically, it doesn't stop there. Todd Helton was a longtime great first baseman in Denver; recently-elected Hall of Fame outfielder Larry Walker made a name for himself in a Rockies uniform; and Andres Galarraga was one of the best hitters in baseball at the turn of the millennium.

But what about the pitching? Well, while the Rockies rank as one of the best-hitting teams in the modern era, they have had some astronomically terrible pitching seasons. Last season, the Rox ranked dead last in the National League in terms of team ERA (5.56) and have never had a seasonal ERA below 4 in the team's entire history. That's why the Rockies have never won a division title in their 28-year existence. Sure, they've been a Wild Card team a couple of times and even made a World Series in 2007 (which was a sweep by the Red Sox), but they can't keep up in the pitching department because of their ballpark. So, in order for the Rockies to win a World Series, they will have to have one of the best run-producing seasons ever to compensate for the Coors Effect. I, for one, can't wait to see Nolan Arenado hit 60 bombs on the way to the Fall Classic, if it ever happens.

Hey baseball fans!
Relievers are sometimes called firemen because, well, they put out fires, "relieving" the starters they replace on the mound by getting out of jams. This didn't come from nowhere, however, because it was actually the nickname of one of the first modern-day relievers baseball ever saw, Johnny "Fireman" Murphy. So, let's talk about him!
When I started blogging about baseball history eight years ago, my grandfather, who grew up in the Bronx, told me about how he used to work in a store near Yankee Stadium. Sometimes, members of the Yankees would come in to shop in the store and one of the Yanks that visited often was Johnny Murphy. I had never heard of him, so I did some research and found out some very interesting stuff on him. Murphy was not a Hall of Fame closer, but he was one of the first closers in MLB history. From 1937-1942, Murphy led the league in saves in four out of six years, making All Star Games in the first three years of that span. His highest saves total came in 1939, when he had 19 of them, which was the second-highest amount of single-season saves at the time. Murphy collected 107 saves during his 13-year career in the 30's and 40's (with some of those years eaten up by military service during World War II), which was actually a record that stood all the way until 1961, the same year he joined the front office of the newest MLB expansion team, the New York Mets.
That's right, Mets fans. Your 1969 Miracle Mets team was built up by one of baseball's first relievers. Murphy, along with former Yankee executive George Weiss, helped construct the Mets farm system throughout the 60's that would eventually sprout great names like Tom Seaver, Nolan Ryan, and Jerry Koosman. Murphy was also responsible for the trade that brought legendary manager and should-be Hall of Famer Gil Hodges to the Amazins', a move that helped the Mets win an improbable World Series title in 1969. Sadly, "Fireman" died of a heart attack three months after the team from Flushing won their first Fall Classic. Had he lived, who knows how good the Mets could've been. 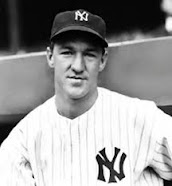 Thanks for reading this post and I hope you enjoyed it. Check back soon for more of "all the buzz on what wuzz."
Posted by Matt Nadel at 10:58 AM No comments: