Most baseball fans are familiar with Barry Bonds, also known as baseball's all-time home run king. But he's just the MLB's leader in home runs. "Who leads the minors in career homers?" you ask. The answer? A man named Mike Hessman.

Hessman went to Mater Dei High School in Santa Ana, California and was a star on the school's baseball team. He was so good that he was drafted right out of high school by the Atlanta Braves in the 15th round of the 1996 MLB Draft. Hessman did great for the Braves' minor league affiliates during his time in the organization. During these years, 1996-2004, he averaged 19 home runs a season. After the '04 campaign, Hessman became a free agent and decided to sign with the Detroit Tigers. Despite singing with Detroit, he spent most of the time in the Tigers' organization in Toledo with the franchise's Triple A affiliate, the Toledo Mud Hens. His power numbers rose even higher with Toledo, as he smacked 28 home runs a season with the minor league club from 2005-2009. In fact, his power numbers actually helped the Mud Hens win the 2005 and 2006 International League championships, the '05 win being their first in 38 years. On September 4, 2009, Hessman played all nine positions for the Mud Hens. He started as the catcher for the day and ended as the pitcher.

After the 2009 season, Hessman signed a minor league deal with the New York Mets, but only hit 18 home runs for their minor league teams in 2010. After playing with the Orix Buffaloes, a Nippon Professional Baseball team in Japan, in 2011, he returned to the MLB and signed a contract with the Houston Astros. His 2012 minor league campaign featured his career-high in home runs with 35 while playing for Houston's Triple A affiliate, the Oklahoma City RedHawks. Hessman then signed with the Cincinnati Reds prior to the 2013 season and hit 25 for the organization's Triple A affiliate, the Louisville Bats. After signing with the Tigers once again and while playing for Toledo on June 30, 2014, Hessman hit his 259th International League home run, a now-career record for that league. On August 3, 2015, while still playing for the Mud Hens, Hessman hit his 433rd career home run, which just so happened to have been a grand slam, setting a new minor league baseball record for the most home runs in a career. He also had 1,207 RBIs in the minors. On November 28, 2015, at the age of 37, Hessman announced his retirement.

I know I'm telling you all these minor league stats, but what about the Majors? Surely the minor league leader in home runs has had some major league experience, right? Well, not really. He did play in the Majors, but only for 109 games over five seasons with three different teams. During his time in the Majors, he batted only .188 with just 14 homers.  It just goes to show you how unpredictable the MLB can be. You can be one of the greatest hitters in the minors, but just not get your chance in the Majors. Thanks for reading this post and I hope you enjoyed it. Check back soon for more of "all the buzz on what wuzz."
Posted by Matt Nadel at 10:24 AM No comments:

It's time for another Baseball with Matt Quiz! Here's the deal: answer the following question in the comments section. In an upcoming post, I will reveal the answer. Here we go!!!! 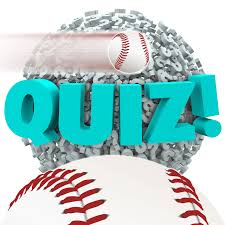 There's only one baseball team to win a World Series while playing in three different cities. What was the team and in which cities did they play their home games in which years? It's an easy question if you look it up, so for a challenge, don't use any source material.

Do you think you can get the question right? Prove your answer to me in the comments section below. I hope you enjoy this BwM Quiz and thanks for participating. Check back soon for the answer to my question and more of "all the buzz on what wuzz."
Posted by Matt Nadel at 12:22 PM No comments:

One of my favorite things about baseball history is the players' nicknames. Some are really funny, while some just make no sense. However, there are a few instances among the baseball Hall of Famers where nicknames are either repeated, similar, or contradict each other. Here's a list of some examples of each:

And if you'd like to read more about baseball history, baseball nicknames or the Baseball Hall of Fame, please check out my book on baseball history, Amazing Aaron to Zero Zippers. It's a book filled with cool facts and great pictures, and all of my proceeds are going to four charities, ALS, Turn 2, the Baseball Hall of Fame, and the Jackie Robinson Foundation. In other words, the perfect holiday gift!!! 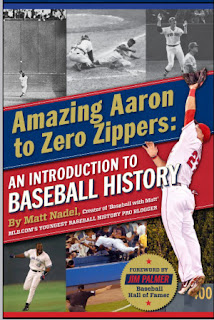 In the spirit of the Winter Meetings in Nashville, it's time to discuss yet another trade! On December 5, 1990, Fred McGriff and Tony Fernandez of the Toronto Blue Jays were traded to the San Diego Padres for Roberto Alomar and Joe Carter. All four of these players were solid, but who got the better deal in the long run, the San Diego Padres or the Toronto Blue Jays?

Padres' Acquisitions: McGriff and Fernandez
Crime Dog actually did pretty well in southern California. From 1991 through half of the 1993 season (he was traded to the Braves in the middle of '93), McGriff batted .281 with 84 homers and 256 RBIs. He even made the 1992 All Star Game and won the home run title that same year with 35 dingers. Fernandez also played two and a half years with the Pads (he was traded to the Mets midway through '93) and also did well. A fellow member of the 1992 NL All Star Squad, Tony had 323 hits in his time in the luckiest city in the US. The Padres posted over-.500 records in '91 and '92, but tanked in '93 after they traded away their stars. They never won a division title with  McGriff and Fernandez.

Blue Jays Acquisitions: Alomar and Carter
Roberto Alomar played in an All Star Game every single year he was in Toronto, from 1991-1995. The slick-fielding second baseman was a runs and hits machine for the boys above the border and batted .347 for the Jays in World Series play. His time in Canada was probably a huge reason why he was inducted into the Hall of Fame in 2011. Carter, meanwhile, was a five-time All Star for the Blue Jays from 1991-1997 and totaled 203 home runs and 736 RBIs during that span. Oh yeah, I almost forgot: he also became the second hitter in baseball history to hit a walk-off, World Series-winning home run when he walked off the Blue Jays for their second consecutive World Series title in 1993. Yeah, that's right: the Blue Jays won back-to-back World Series in 1992 and 1993 thanks in huge part to this trade.

The Winner of the San Diego-Toronto Swap: Toronto Blue Jays

If the Padres had kept Alomar and Carter, would they have a World Series championship? Would Alomar have become the Hall of Famer we now love? Would Fred McGriff continue his murdering of MLB pitching if he stayed in Toronto? Would the Blue Jays ever win a World Series? So many questions to be answered! Anyway, thanks for reading this post and I hope you enjoyed it. Check back soon for more of "all the buzz on what wuzz."

Eight years ago today, Miguel Cabrera was traded to the Detroit Tigers from the Florida Marlins. The trade didn't just involve Miggy, however. There was a slew of players in the exchange, but who got the better deal: Tigers or Marlins?

Tigers' Acquisitions: Cabrera and Dontrelle Willis
Miggy has had some very productive and successful years in the Motor City. With the Tigers, he has batted .326 with 270 home runs and 922 RBIs. He's made six All Star appearances, led them to an AL pennant in 2012 while winning the Triple Crown, and won two MVP Awards. The only downside to this trade for the Tigers was acquiring Willis, a starting pitcher and the 2003 NL Rookie of the Year, who only started 22 games for Detroit over three seasons and went 2-8.

Marlins' Acquisitions: Dallas Trahern (minors), Burke Badenhop, Frankie De La Cruz, Cameron Maybin, Andrew Miller, and Mike Rabelo
Let me sum up how much the Marlins got scammed in this trade in the following sentence: Trahern never made it to the majors, Badenhop only pitched two years in South Beach and went 13-15, De La Cruz had an ERA of 18.00 in six games pitching in Florida, Maybin only had 43 RBIs with the club in 144 games in three seasons, Miller's pitching record for the Marlins was 10-20 with an ERA of 5.89 in three years, and Rabelo only batted .202 in 34 games.

The Winner of the Miggy Trade: Detroit Tigers (of course)!!

Sorry Marlins fans, but next time, make sure your team doesn't trade away future Triple Crown winners. Well, at least now the Marlins are aware of their terrible mistake. Anyway, thanks for reading this post and I hope you enjoyed it. Which trade would benefit both the Tigers and the Marlins? Maybe the Marlins should have asked for Gary Sheffield and Curtis Granderson. Leave your thoughts in the comments section and check back soon for more of "all the buzz on what wuzz."
Posted by Matt Nadel at 7:30 PM 2 comments: