In the new movie, "Green Book," which takes place in 1962, there is a scene where Bronx natives are watching a Yankees game. One of the people watching the game says something along the lines of, "I hope this doesn't go to a seventh game." This is actually not an anachronism; the Yankees did actually play in the 1962 World Series against the San Francisco Giants and the Series did go seven games. In fact, that seventh game features one of the most exciting final moments of any World Series ever, so let's talk about it.

The 1962 World Series went back and forth for the first six games, with the Yankees taking the odd-numbered games and the Giants taking the even-numbered ones. Game Seven seemed to be going in a similar fashion, as the Yanks were up 1-0 over the Giants entering the bottom of the ninth at Candlestick Park in San Francisco. Ralph Terry was on the mound for New York, even though he had given up the walk-off, World Series-winning home run to Bill Mazeroski of the Pirates just two years before. Nonetheless, Terry had pitched scoreless ball since the sixth, so Yankees manager Ralph Houk kept the big righty in the game.

Pinch hitter Matty Alou started off the inning with a bunt single. After two strikeouts, Hall of Famer Willie Mays laced a double down the right field line, but Alou had to stop at third. Now, with two outs and runners on second and third, fellow Hall of Famer Willie McCovey stepped to the plate. Because yet another Hall of Famer, Orlando Cepeda, was on deck, McCovey was not intentionally walked. On the second pitch of the at-bat, Terry threw a fastball on the inside part of the plate. McCovey, a lefty, adjusted to the location of the pitch and pulled the pitch on a rope. The laser of a hit looked to be zipping over second baseman Bobby Richardson for a walk-off hit, but because of the ball's topspin, Richardson just had to range to his left to make the catch, which he did. In what could've been a disastrous moment for Terry, the Yankees won their 20th World Series and their last one of their dominant 40-year run. Funnily enough, Terry was named World Series MVP. 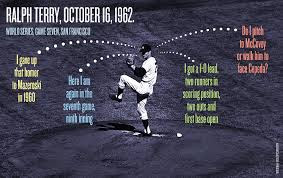 I love this play so much because no one really remembers it and it was so star-studded. Not only do you have three Hall of Famers involved, but one of baseball's biggest families (the Alous) as well. Thanks for reading this post and I hope you enjoyed it. Check back soon for more of "all the buzz on what wuzz."
Posted by Matt Nadel at 6:26 PM No comments:

The Veteran's Committee recently voted in two guys into the Baseball Hall of Fame. One of them, Lee Smith, definitely deserved it. The other one, Harold Baines, possibly didn't. Here's why.

Baines played for 22 seasons from 1980-2001, most famously with the White Sox and Orioles. During that 22-year span, Baines batted .289 with 384 home runs and 1,628 RBIs. To some, these numbers might be worthy of the Hall of Fame, but to most people, this is not the case. My personal problem with Baines being in the Hall of Fame is his seasonal averages. He played for 22 years, so for a guy with a .289 lifetime batting average, one would expect him to have over 3,000 career hits. However, he only averaged about 130 hits per season, which is way lower than the 150 hits per 20 years that are required for 3,000 career hits. 384 homers and 1,628 RBIs over 22 years comes out to only 17 home runs and 74 RBIs a season. The 74 RBIs are Baines's most respectable per-year statistic, which isn't saying much. Baines's Hall of Fame case is a close call, for sure, and I'm not denying him being a great player, but even the BBWAA didn't think he was a Hall of Famer; he never reached a double-digit voting percentage while on the BBWAA ballot. 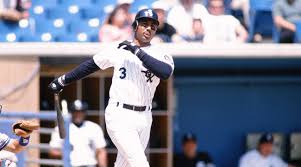 Many people, including myself, are claiming that with Baines's induction into the Hall of Fame, Hall of Fame standards will have to be lowered. The reason why this is a problem is that out of the four major professional American sports' halls of fame, Cooperstown is the hardest to get into. Some people might view Hall of Fame voting as completely arbitrary and that it doesn't really matter for baseball. But those people have to understand that a tough Hall of Fame gives its sport more credibility and in an age when baseball isn't the most popular American sport anymore, that credibility is more important now than it was ever before.

I highly recommend you read some articles on what BBWAA voters are saying about the Baines' election, because my opinion is shared with quite a number of people. This is a very big deal for the Hall of Fame and will change a lot of voters' opinions about future elections. The only thing to do now is to see how this all unfolds in a few years and watch as new arguments erupt about Hall of Fame elections that had previously been dormant for decades. Thanks for reading this post and I hope you enjoyed it. Check back soon for more of "all the buzz on what wuzz."
Posted by Matt Nadel at 3:38 PM No comments:

I am in love with the youth of baseball right now, especially the 2018 AL and NL Rookie of the Year award winners, Shohei Ohtani and Ronald Acuna. But this got me thinking: which Rookie of the Year combination of the past is the best of all time? Below is the answer to that question in the form of a top five list. While making it, however, I had one rule: one RoY winner can't be the sole reason for the combo's inclusion, so Willie Mays and Gil McDougald, the 1951 winners of the award, will not appear below. Also, this list looks at the careers of former Rookie of the Year winners, not their rookie seasons. Now, without further ado, let's begin!

Honorable Mention: 2012
AL winner: Mike Trout
NL winner: Bryce Harper
Why? These two are absolute studs, but they're both so young. If I remake this list in seven years and these two MVPs remain elite, then they'll definitely jump the #5 combo on this list. Speaking of which...

#5: 1993
AL winner: Tim Salmon
NL winner: Mike Piazza
Why? Piazza, in my opinion, is the greatest hitting catcher in baseball history. His 427 career home runs rank first among all-time catchers and his .308 lifetime batting average is unheard of for catchers of the modern era. Salmon, even though he never made an All Star Game and is the only player on this list who is either not in the Hall of Fame or probably never will be, was a fan favorite on the Angels, helping them to their first and only World Series championship in team history in 2002. During the best ten-year stretch of his 14-year career from 1992-2006 (he missed 2005 due to injury), he averaged 26 homers and 87 RBIs a season.

#4: 1977
AL winner: Eddie Murray
NL winner: Andre Dawson
Why? Steady Eddie was one of the most consistent hitters in baseball history and is probably the most underrated hitter in the 500-3,000 club (500 homers and 3,000 hits). Dawson made a name for himself as both a member of the Expos and the Cubs, averaging 132 hits, 21 home runs, and 76 RBIs a season.

#3: 1956
AL winner: Luis Aparicio
NL winner: Frank Robinson
Why? Aparicio started off his career by winning nine straight AL stolen base titles and totaled 506 during his time in baseball. The nine-time Gold Glover and ten-time All Star shortstop is the only Venezuelan in the Hall of Fame. Robinson is one of the more unsung sluggers of the 1950s and 1960s, totaling 586 homers and 1,812 RBIs during his 21-year career. He was the first hitter in baseball history to win the MVP in both leagues, winning it in 1961 with the pennant-winning Reds and in 1966 with the Orioles, a year in which he won the AL hitting Triple Crown.

#2: 2001
AL winner: Ichiro Suzuki
NL winner: Albert Pujols
Why? You could consider this pick biased, but you also really can't. Ichiro was the second hitter in baseball history to win the Rookie of the Year and MVP awards in the same season and is the single-season hits champion, collecting a record 262 hits in 2004. Pujols is one of only nine hitters in baseball history with 600+ home runs and his 633 career dingers put him in sixth place on the all-time list. The three-time MVP is also one of my personal childhood heroes, so maybe I'm a little biased, but again, who wouldn't be?

#1: 1967
AL winner: Rod Carew
NL winner: Tom Seaver
Why? Carew is the greatest contact hitter in the history of two separate franchises. During his career with the Twins and Angels, he made the All Star Game every single year except for his last and sits at 27th on the all-time hits list with 3,053 career base knocks. Seaver, plain and simple, was one of the greatest pitchers of his generation. The 12-time All Star and three-time Cy Young Award winner has a lifetime ERA of 2.86 and his 311 career wins aren't that bad, either.

What do you think of this list? Leave your thoughts in the comments section below. Thanks for reading this post and I hope you enjoyed it. Check back soon for more of "all the buzz on what wuzz."
Posted by Matt Nadel at 8:19 PM No comments: