Last month, I was asked to speak at the Bowery Poetry Club in NYC where the theme was Yankees v. Red Sox and how baseball is good medicine. All the proceeds from the event went to the Made Visible Foundation charity.  There were six speakers (no poems were required) and, guess what?? I actually won!! It was a lot of fun and I would definitely do it again.

Here's a link to the video of the event highlights. Check it out. 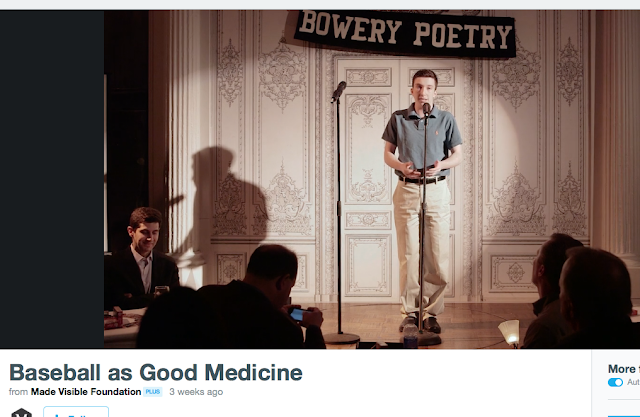 And tune in again soon for more of "all the buzz on what wuzz."
Posted by Matt Nadel at 11:51 AM 4 comments:

Jackie Bradley Jr. of the Boston Red Sox just had his hitting streak stopped at 29 games last night against the Rockies. With this streak stopped, let's take a look back at some historic hitting streaks since Joe DiMaggio's record-setting 56 consecutive games with at least one base hit.

Pete Rose came very close to breaking Willie Keeler's NL record for consecutive games with a hit, but only tied the record at 44 games in 1978. Rose had a chance to extend the streak against the Braves on August 1, but he went 0-4 with a strikeout in a 16-4 Atlanta drubbing of Rose's Reds.

Paul Molitor had a decent 39-game hitting streak going in 1987, but it came to an end on August 26, 1987 in interesting fashion. Molitor led off for the Milwaukee Brewers on that day against the Indians at home, but didn't have a hit through nine innings. However, the game remained tied at zero and went into extras. Molitor had a chance to be up in the bottom of the tenth, but pinch hitter Rick Manning hit a walk-off single to give the Brew Crew the win over Cleveland with Molitor warming up on deck. Brewers fans were very angry that Molitor couldn't extend his streak, but the Brewers star's 39-game hitting streak is the longest since Rose's 44-game hitting streak.

There are four players who have had 34-game hitting streaks in their careers, but the only one I want to mention is Dom DiMaggio's. If the last name doesn't sound familiar, Dom was Joe's brother and was an All Star for the Red Sox (ironically). Dom DiMaggio's hitting streak of 34 games could've been elongated, but Joe had to step in to preserve his record. On August 9, 1949, the Yankees and their DiMaggio rolled into Boston to face the Red Sox and their DiMaggio at Fenway Park. Dom had a good chance to continue his streak, but Joe robbed him of a hit with a spectacular catch in center field.

Joe DiMaggio's hitting streak will probably never be broken, but if there is one player who is currently playing in the MLB who has a chance at doing it, I'd say it's Jose Altuve of the Houston Astros. Who do you think could get a hit in 57 straight games? Leave your thoughts in the comments section below. Thanks for reading this post and I hope you enjoyed it. Check back soon for more of "all the buzz on what wuzz."
Posted by Matt Nadel at 1:58 PM No comments:

As you can probably tell from my posts, I love lists, which is why I was so excited when I was asked to read and review the book, "50 Moments That Defined Major League Baseball" by Rocco Constantino. Constantino is an NCAA athletics administrator at Bloomfield College and baseball historian, but he also does some freelance writing and this book shows how good of a writer and journalist he really is.

"50 Moments That Defined Major League Baseball" is a book that does exactly as advertised: tells the reader 50 moments in baseball history that were so iconic, that they changed the way America's pastime is perceived and played. The book includes all of the regulars, like Jackie Robinson, Babe Ruth, and Hank Aaron and their respective milestones, but it also includes some pretty obscure names and moments that the average young baseball fan probably wouldn't know, like Dave Stieb's numerous attempts at pitching a perfect game or Mark "The Bird" Fidrych's quirks that made him a national superstar on the mound. But no matter what the topic is, Constantino does a great job at narrating the scene, telling the reader why the moment is so captivating and why it has altered baseball's future. One of my favorite chapters in the book is about Mike Schmidt's 500th home run because Constantino eloquently captures what Schmidt, who is my favorite player in baseball history, meant to the city of Philadelphia, the city in which the Hall of Fame third baseman played his entire career, and how he saved the Phillies' franchise.

One of the ways that Constantino conveys his messages about each moment is via interviews. The book has a lot of them and each contribute to the telling of any of the 50 stories in their own unique ways. Some of the interviews are with a subject's teammate or rival or even an umpire that witnessed the story firsthand. The perspectives that the reader is given while reading the book are both fun to read and interesting. The reader gets a better view on the magnitude of the event, which I enjoyed a lot.

Overall, I'd definitely recommend this book to anyone who wants to learn more about baseball, wants to relive past memories of the game, or anything in between. The 50 stories are great on their own and collectively they show why America has loved baseball for over a century. Thanks for reading this book review. If you'd like to pick up the book on Amazon, click here. Check back soon for more of "all the buzz on what wuzz."
Posted by Matt Nadel at 12:39 PM 1 comment:

Yesterday, Max Scherzer of the Washington Nationals struck out 20 Detroit Tigers in a 3-2 Nationals win, tying the record for the most single-game strikeouts in baseball history! But who is he tied with and how many people? Well, in this post, I will explore the answer to that question.

Roger Clemens twice struck out 20 batters in a game. The first year was 1986, the year he made his first All Star Game and won his first of a record seven Cy Young Awards. On April 29, 1986, Clemens started at Fenway Park against the Seattle Mariners, a team that would finish the '86 campaign with the second-worst record in the major: 67-95. Clemens mowed through the Mariners' lineup with ease, striking out each starting player at least once. Seattle left fielder Phil Bradley actually struck out a team-high four times that day. The Red Sox ended up winning the game, 3-1, and Clemens got his fourth win out of the 24 eventual wins he would collect in 1986.

Fast forward to September 18, 1996, where Clemens would again strike out 20 batters, this time against the Detroit Tigers, who, in 1996, posted one of the worst win-loss records in baseball history at 53-109. Once again, Clemens struck out each member of the Tigers' starting lineup at least once, with the strikeout leader being shortstop Travis Fryman with four strikeouts on the night. The win marked Clemens's tenth win on the season and the 78th win for the Sox.

Before Scherzer, the last 20-strikeout performance in a game was by Kerry Wood of the Chicago Cubs against the Houston Astros on May 6, 1998. Unlike Clemens's 20-strikeout games, Wood struck out every single batter who appeared for the Astros at least once, pinch hitters and all. Actually, had Wood not given up a single to Ricky Gutierrez in the top of the third, he would've pitched a perfect game. The Cubs ended up winning the ballgame (obviously) by a final score of 2-0, as Wood picked up his third win of the young season.

I almost forgot to mention: Randy Johnson collected 20 strikeouts against the Reds on May 8, 2001 while pitching for the Diamondbacks, but he actually let up an earned run and the game went to extras tied at one. The D-Backs eventually won the game, but Johnson didn't get to win. So yes, he did reach the 20-strikeout milestone, but he didn't get the "W."

Some performances, huh? Seriously, congratulations to Max Scherzer for join such a exclusive club! Thanks for reading this post and I hope you enjoyed it. Check back soon for more of "all the buzz on what wuzz."
Posted by Matt Nadel at 8:50 PM No comments:

Lou Gehrig sure did play in a lot of consecutive games, 2,130 to be exact, and during that time, he hit a lot of home runs, 493 to be exact. Actually, Gehrig shares his spot on the all-time home run list with  a hitter who isn't in the Hall of Fame, but scared pitchers to death when they faced him. His name is Fred McGriff.

Fred "Crime Dog" McGriff played for 19 years in the MLB from 1986-2004 with the Blue Jays, Padres, Braves, Cubs, Dodgers and Rays. The five-time All Star first baseman was feared by pitchers all across baseball for one reason and one reason only: his power. In 15 seasons, McGriff hit 20 or more home runs and, in ten of those years, hit 30 or more home runs, leading the league in the category in 1989 and 1992. But he wasn't all about the long ball. McGriff scored 90 or more runs in four seasons and drove in 90+ runs in a season 12 times, with eight of those times being more than 100 RBIs. Of course, no hitter is complete without his ability to smack the ball all over the field, which Crime Dog could do as well. During his career, he collected 2,490 hits and batted .284 lifetime.

McGriff put up some great statistics, but what's arguably more compelling about his career is the outcomes of the trades in which he was involved. First, after the 1990 season, the Blue Jays shipped him and Tony Fernandez to the Padres for future Hall of Famer Roberto Alomar and 1993 World Series hero Joe Carter. Without that trade, Alomar might not have a plaque in Cooperstown and the Jays wouldn't have won the '93 World Series. If you think I'm done with important trades involving the Tampa, Florida native, then you're wrong! In July of 1993, Toronto traded McGriff to the Atlanta Braves. Without that trade, Atlanta probably wouldn't have beaten out the San Francisco Giants in one of the tightest races for a divisional championship in baseball history. With the Braves in 1993, McGriff hit 19 home runs in 68 games and came in fourth in the MVP voting!

Like I mentioned before, Fred McGriff is not in the Hall of Fame, but hopefully, he will someday deservedly get into the Hall. I think he should get in because he was so close to 500 home runs and even if he didn't make it to the big 5-0-0, he was still one of the best sluggers of his generation. Thanks for reading this post and I hope you enjoyed it. Check back soon for more of "all the buzz on what wuzz."
Posted by Matt Nadel at 8:05 PM No comments: