Baseball and Softball in the Olympics 8/20/16

For the longest time, the two sports were only considered recreational in the Olympics. There were no medals awarded for the best team and the sports didn't really gain the recognition they deserved. However, there were some instances that made it apparent that baseball should have been an Olympic sport sooner than it actually became one. An exhibition game between two American teams during the 1936 Berlin Games was watched live by around 100,000 people, almost double the seating capacity at Yankee Stadium, and an exhibition game between the U.S. and Australia during the 1956 Melbourne Games was watched live by 114,000 people, the largest attendance for a baseball game ever to that date.

The 1984 Olympics in Los Angeles were the first games to have a tournament for baseball, but the sport was still considered an exhibition and no medals were awarded for first place Japan or second place United States. The two countries flip-flopped positions in the '88 Seoul Games, but still no official medals were given out. Finally, baseball became an official Olympic sport in time for the 1992 Olympics in Barcelona, while softball became one for the '96 Games in Atlanta. Both sports had eight team round-robin tournaments. The teams with the most wins would face off in semifinals and finals. However, the IOC (International Olympic Committee) voted baseball and softball out of the Olympics for the 2012 Games in London, becoming the first sports to be voted out of the Olympics since polo was eliminated from the 1936 Games. But baseball and softball will be back for the 2020 Tokyo Games after the IOC approved their return on August 3, 2016.

Cuba won the gold in baseball in 1992, 1996, and 2004, while the U.S. took gold in 2000 and South Korea in 2008. Other teams to have placed in the top three include Australia (silver in '04), Chinese Taipei (silver in '92) and Japan (silver in '96 and bronze in '92 and '04). In softball, the U.S. won the first three golds, while Japan took gold in 2008. Australia and China have won the other medals during softball's Olympic history. Pitcher Pedro Luiz Lazo for Cuba is the most decorated baseball Olympian, helping Cuba to four medals from 1996-2008. Pitcher Jennie Finch never lost a game for the U.S. softball team during Olympic play and was on the nation's gold medal team in 2004 and silver medal team in 2008.

Who else is excited for baseball and softball in the Olympics? Leave your thoughts in the comments section below. Thanks for reading this post and I hope you enjoyed it. Check back soon for more of "all the buzz on what wuzz."
Posted by Matt Nadel at 2:19 PM 1 comment:

The future is bright in the Bronx! Tyler Austin and Aaron Judge hit back-to-back home runs in their first major league at-bats on Saturday against the Rays, the first time that has ever happened in history. In honor of the Baby Bombers and a certain someone just getting to 3,000 hits, here is one of the greatest rookie seasons in MLB history.

Ichiro Suzuki was one of the greatest Nippon Professional Baseball hitters in the Japanese baseball league's history. Playing for the Orix Blue Wave from 1992-2000, Ichiro batted an astounding .353! His name became known around the baseball world and before the 2001 MLB season, he signed with the Seattle Mariners. Everyone knew he was a star in the making, but no one could've ever predicted the year he was going to have in 2001.

The 27-year-old MLB rookie led the league in the following categories: plate appearances (738), at-bats (692), stolen bases (56), batting average (.350), and base hits (242). He became the first player since Jackie Robinson in 1949 to lead the league in batting average and stolen bases in the same season. Ichiro was on the cover of Sports Illustrated, became the first rookie to receive the most votes for the All Star Game due to the MLB allowing voting in Japan, and became the first Rookie of the Year Award winner since Fred Lynn in 1975 to win the MVP in the same year. He is also the only hitter in baseball history to win the RoY, MVP, Silver Slugger, Gold Glove, and start in the All Star Game in the same season. Honestly, Ichiro's rookie campaign was just magical.

Oh yeah, I forgot to mention; Suzuki helped his Mariners win 116 games, the most in the American League ever. Sadly, Seattle lost to the Yankees in the 2001 ALCS and are still the only AL team to never reach the World Series. However, Ichiro Suzuki will forever be known as one of if not the greatest hitter in the history of the Seattle Mariners and it all started during that legendary rookie year. Congrats on 3,000, Ichiro. Thanks for reading this post and I hope you enjoyed it. Check back soon for more of "all the buzz on what wuzz."
Posted by Matt Nadel at 11:08 AM 1 comment:

The Dominant Ballplayers of My Generation 8/8/16

Ichiro Suzuki has 3,000 career hits! I am so happy for him because this is a guy who I grew up watching for more than half of his great career. This got me thinking: who are some of my favorite current MLB players whose entire careers I've grown up watching since I started following baseball back in 2007? Here are a few in no particular order:

Number One: Dustin Pedroia
Pedroia has always been one of my favorite players in baseball playing now because I was a baseball fan rookie when he was an MLB rookie. I've seen him evolve into the All Star and MVP that he is today and have always respected him, even though he's on the Red Sox. One of the best second baseman in baseball, Pedroia has not just captivated me since 2007, but many other baseball fans across the nation. A .298 career batting average is pretty darn good.

Number Two: Andrew McCutchen
I remember when Cutch was lighting up Pittsburgh in 2009 and I could tell right then and there that he was going to be a star, but I didn't know what he would specialize in. To my surprise, he is great at all aspects of the game. He's batted over .300, hit more than 30 homers, stole more than 25 bases, been to multiple All Star Games, won many Gold Gloves and Silver Slugger Awards, and was even an MVP in 2013. He's a real five-tool player and it's been really cool to see him dominate the game in so many ways.

Number Three: Clayton Kershaw
I mean, he's the best pitcher in baseball and it's not even close. It seems impossible that a pitcher today could have a career ERA of 2.39, but that's exactly what Kershaw's is. The LA Dodger has been intimidating hitters since 2008 and I actually remember when he was just good and not legendary. All I know is I would not want to face him in a live game or even batting practice.

Numbers Four and Five: Mike Trout and Bryce Harper
The 1980s had Mike Schmidt and George Brett and the 2010s have Trout and Harper. The 2012 Rookies of the Year in the AL and NL, respectively, have torn up baseball since they joined the league. Trout has had a bit more success overall, but they're pretty even nowadays. This is the prime battle between two young players at the same position in current baseball over who is the best and I hope it continues for many years to come. When these guys came into the league, they were so hyped up, and now I know that this is justified. Some players, they are.

Who are some of your favorite players that you grew up watching? Write your comments in the comments section. Thanks so much for reading this post and I hope you enjoyed it. Check back soon for more of "all the buzz on what wuzz."
Posted by Matt Nadel at 9:30 PM No comments:

Number Five : Mookie Wilson
Why? Look, he's no Hall of Famer, but without him hitting that grounder towards first base in the bottom of the tenth with two outs in Game Six of the 1986 World Series, one of my favorite plays in baseball history would have never happened. He's a fan favorite in Flushing and for good reason; 327 steals in 12 seasons in the Majors is not too shabby. 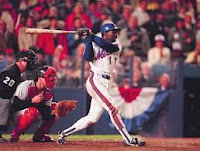 Number Four: David Wright
Why? I've grown up watching Wright play third base for the Mets and even though he has become very injury-prone in recent years, Mets fans still love him. He's essentially a version of Derek Jeter, but for the Mets, so how can you not love him? Yes, this is a biased pick, but his statistics are pretty stellar. In 13 years in the MLB, he's made seven All Star Games, bats .296 lifetime (which is better than Hall of Famers Duke Snider and Barry Larkin), and has hit 242 homers.

Number Three: Mike Piazza
Why? Statistically, he's the most powerful catcher in the history of the MLB and his 12 All Star Games and 1993 NL Rookie of the Year only help his cause. He would definitely be higher if not for my obligatory hatred towards him because of the little incident with him and Roger Clemens in the 2000 World Series.

Number Two: Gary Carter
Why? Carter is arguably one of the most beloved players in Mets history. This catching predecessor to Piazza surely left the 2016 Hall of Fame inductee with big shoes to fill. Carter made the All Star Game 11 times, hit 324 career homers, drove in 1,225 runs, and was an important contributor to the Mets' 1986 World Series run.

Number One: Tom Seaver
Why? I never understood why Seaver had the highest Hall of Fame voting percentage (before this year) until I looked at his career stats: a 2.86 ERA, 311 wins, 3,640 strikeouts, 12 All Star Games, and three Cy Young Awards. Wow. Just wow!! 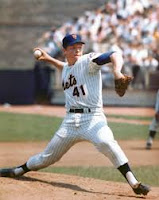 Do you agree with my picks? Leave your thoughts in the comments section below. Thanks for reading this post and I hope you enjoyed it. Check back soon for more of "all the buzz on what wuzz."
Posted by Matt Nadel at 4:52 PM 1 comment: