The final series of the regular season is here and we have our official ten teams for the 2019 MLB playoffs, which means it's only appropriate for me to give some historical perspective on what the 2019 MLB postseason could mean for baseball's present and future, but especially its past.

Yankees vs. Twins: Part 6
For the sixth time in the 21st century, the New York Yankees will face the Minnesota Twins in the MLB postseason. Each time this matchup has occurred in October in the past, the Yankees have won the series. This includes four ALDS series victories (2003, 2004, 2009, and 2010) and a Yankee Wild Card Round win just two years ago, meaning that the Twins are out for revenge. If they make it to the World Series, it will be their sixth AL pennant in franchise history (including the times they were the Washington Senators) and could lead to their fourth World Series title ever and first since 1991. The Yankees, meanwhile, have made 40 pennants and won 27 World Series, the most US sporting championships ever, three ahead of the NHL's Montreal Canadiens.

A Pennant in Each League
The other AL divisional winner is the Astros, who could win their second AL pennant ever, having won the World Series in 2017 against the Dodgers. When they made the 2017 Fall Classic, they became the first team to win an American and National League pennant, having played in the NL from 1962-2012 and winning the 2005 National League pennant. The Brewers are the other team in baseball to have switched leagues, moving from the AL to the NL in 1998. They last won a pennant in 1982, meaning that if they make the World Series, they could become the second team to win a pennant in each league.

The Rays and Nats: The Losers
The Tampa Bay Rays and the Washington Nationals have never won a World Series, two of the three teams out of this year's ten to fall under this dubious category (the other being the Brewers). The Nats actually haven't even been to a World Series before (the other MLB team that hasn't reached the Fall Classic is the Mariners), while the Rays haven't made it since their five-game Series defeat in 2008 to the Phillies. A championship for either squad would break some interesting geographic droughts: no Florida team has won the World Series since 2003 (Marlins over Yankees) and no DC team has won the World Series since 1925 (Senators, aka Twins, over Giants).

Braves vs. Cardinals: A Historical Matchup
Two of the six original MLB teams in this year's postseason bracket (the others are the Yankees, Twins, A's, and Dodgers) will most likely battle it out in the National League Division Series this year. The Cardinals last won the World Series in 2011, while the Braves last won in 1995. A victory for the Cardinals in the 2019 World Series would put them in a tie with the Giants for the second-most World Series championships in the 21st century with three, while the Red Sox are leading the category with four. The Braves are looking to become Atlanta's first sports champion of the 21st century, as the Atlanta Hawks and Falcons haven't won their respective championships in a while, if not ever.

Thanks for reading this post and I hope you enjoyed it. Check back soon for more of "all the buzz on what wuzz."
Posted by Matt Nadel at 12:36 PM No comments:

We are two weeks away from the postseason, but we are also two weeks away from the Rangers' last home game at their current stadium, Globe Life Park in Arlington. Now, I've never been to this stadium, but I certainly wish I had visited! One of the items on my life's bucket list is to visit every baseball team's home stadium at least once. I've already been to 13 different stadiums (not counting the Old Yankee Stadium) and, because I'm almost halfway there, I figured I'd give you guys my opinion on my favorite ballparks I've visited.


#5: Citi Field, New York City (Mets)
Yes, Citi Field trumps Yankee Stadium. Don't get me wrong, I love watching my Yankees in the Bronx, but Citi Field has a much better vibe and better attractions. The apple that pops up for Mets homers is always endearing and the blue and orange coloring, representing the flag of New York City and the Mets' uniforms, is a cool aesthetic.

#4: Oracle Park, San Francisco (then AT&T Park)
The home of the Giants will always be AT&T Park to me, but I'm sure older baseball fans will say it will always be Pacific Bell Park. Either way, I loved walking around the concourse, seeing McCovey Cove in right field and the giant glove/slide in left field. But I think what really makes this stadium great is the fans. Look at the yearly MLB attendance rankings. San Fran always gets huge crowds, even when they aren't the best team.

#3: Wrigley Field, Chicago (Cubs)
The most classic of National League parks sure does live up to its reputation in real life. The ivy along the outfield is awesome, along with the stands on the buildings across the street. Knowing its history made it even better, though, as it's the oldest park still standing in the NL. Here's something cool: while at Wrigley, I saw my very first inside-the-park home run by Tony Campana of the Cubs.

#2: PNC Park, Pittsburgh
PNC Park is objectively one of the best stadiums in Major League Baseball, as it seems to be towards the top of everyone's "Favorite Stadiums" list. Walking along the Roberto Clemente Bridge was awesome and the feel within the ballpark was too. I happened to go when the Pirates were doing really well, so the environment was also insane, as MVP candidate Josh Harrison was a key part in the Pirates' tight win against the Reds that day.

#1: Camden Yards, Baltimore
The architecture really makes Camden Yards the best ballpark. It's got Wrigley's ivy, Ebbets Field's iconic right field scoreboard, and has plenty of other landmarks too, like the warehouse just outside the stadium. It's got the overall best atmosphere out of any park I've been to and, if you don't believe me, go to Baltimore and see the O's play here. It's truly mesmerizing.

What do you think of this list? Leave your thoughts in the comments section below. Thanks for reading this post and I hope you enjoyed it. Check back soon for more of "all the buzz on what wuzz."

Yes, Nolan Ryan pitched seven no-hitters during his Hall of Fame career, but you, along with around 7 billion people, have as many perfect games pitched as Nolan Ryan has at zero! This post is inspired by a recurring joke I have with my baseball fan friends, so it's time I share it with you in the form of some fun facts!

Same amount of World Series rings as Ted Williams: Williams may be "the greatest hitter that ever lived" (according to people who are wrong), but he played for the Red Sox in the middle of the Curse of the Bambino. Thus, no rings. He can, however, hold his 1946 World Series appearance over all of our heads, but his Sox lost the '46 Fall Classic to the Cardinals in seven.

Same amount of MVPs as Derek Jeter: Derek Jeter is one of my all-time favorite hitters. He's sixth on the all-time hits list and brought the Yankees five rings. However, Jeter never won an MVP Award during his entire 20-year career. He came close, though, placing in the top five three times.

Same amount of Cy Young Awards as Phil Niekro: Phil Niekro was one of the most durable pitchers in all of baseball. The knuckleballer and Hall of Famer pitched for 24 years in the majors, yet he never won a Cy Young Award, despite finishing in the top six for the award in five seasons.

Same amount of home run titles as Frank Thomas: Frank Thomas was one of the most prolific hitters of the 1990s, slugging his way to five straight All Star Games from 1993-1997 as a member of the White Sox. His 521 home runs are tied for 20th-most on the all-time list, yet somehow, The Big Hurt never led either the AL or the MLB in home runs in any season. 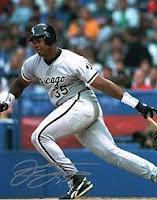 See? You put up Hall of Fame numbers just by being a human being. You just have to look at Hall of Fame benchmarks a little bit differently. Thanks for reading this post and I hope you enjoyed it. Check back soon for more of "all the buzz on what wuzz."
Posted by Matt Nadel at 6:12 PM No comments: