As a Yankees fan, I am in love with rookie sensation and (somehow) MVP candidate Aaron Judge. The giant of an outfielder for New York has cracked a major league-leading 15 home runs thus far through the season. But, in today's social age, there's more to Aaron Judge than just his bat. To be specific, Judge has a hashtag, #AllRise, and a cheering section in Yankee Stadium known as "The Judge's Chambers." But what if some of the greatest players to ever walk on the diamond had these things also? 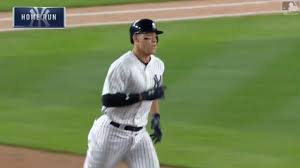 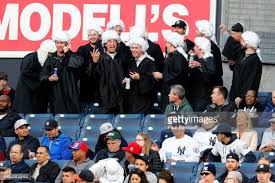 Player: Babe Ruth
Hashtag: #RespectTheSultan
Cheering Section: The King's Quarters
Why? Ruth had many nicknames, but two of them that I specifically thought of for his hashtag and cheering section are the "Sultan of Swat" and the "King of Crash." These two nicknames really bring out of the regal side of Ruth's persona.

Player: Walter Johnson
Hashtag: #AllAboard
Cheering Section: The Train Station
Why? Johnson's nickname was "The Big Train," so people would definitely be "on board" (get it?) with his train-themed hashtag and cheering section. 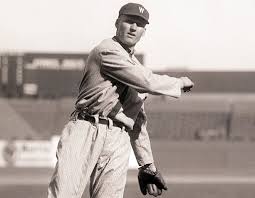 Player: Bob Lemon
Hashtag: #TasteTheSour
Cheering Section: The Lemon Orchard
Why? For those who don't know, Lemon was a seven-time All Star pitcher for the Indians in the late '40s and '50s who was inducted into the Hall of Fame in 1978. He wasn't necessarily always sour, but his last name certainly was. Had he been playing in a more technological age, all of Cleveland would be using his hashtag when he pitched. And his cheering section? Lemons everywhere.

Player: Dennis Eckersley
Hashtag: #FearTheStache
Cheering Section: The Eck Deck
Why? He had a great mustache and the name of the cheering section is catchy. It's as simple as that. 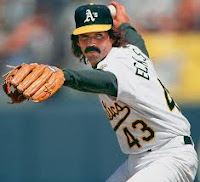 Player: Luke Appling
Hashtag: #FeelThePain
Cheering Section: The Hospital
Why? He was nicknamed "Old Aches and Pains!" How funny is that?! 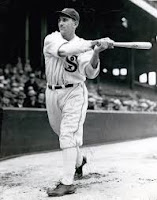 What are some hashtags and cheering sections you would give to some of the other all-time greats? Write them in the comments section below. Thanks for reading this and I hope you enjoyed it. Check back soon for more of "all the buzz on what wuzz."
Posted by Matt Nadel at 9:12 AM No comments:

Want to play a fun game with your friends and family? Have them try to spell the following names of baseball Hall of Famers! They're tougher than you think:

The last name deserves its own list for how many times I've misspelled it: Carl Yastrzemski. Once you get tripped up in the middle, there's no turning back. 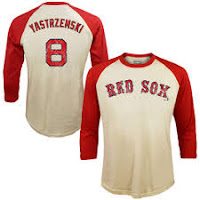 Could your friends spell these names? I highly recommend you test them out. It'll be fun! Thanks for reading this post and I hope you enjoyed it. Check back soon for more of "all the buzz on what wuzz."

I've done a lot of "Top Five" posts on BwM that have been about me recounting history from stories, but for this "Top Five" post, I want to count down something I witnessed firsthand: my top five World Series I've watched (in person or on TV). Since I became a baseball fan during the 2007 playoffs, the Series in contention start from 2008.

Number Five: 2009
End Result: Yankees over Phillies in six
Why? This one is special because it's the only World Series where I watched my favorite team win. I loved that 2009 Yankees team and it will always stay near and dear to my heart.
Favorite Moment: Hideki Matsui had a record six RBIs in Game Six en route to his World Series MVP and he swung at a pitch that almost hit the ground for a home run. 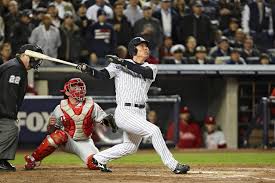 Number Four: 2010
End Result: Giants over Rangers in five
Why? The Rangers had just beaten the Yanks in the ALCS and I wanted to see them really get destroyed, which they did. I was also very happy for the Giants, who won their first World Series in 56 years in 2010.
Favorite Moment: Seeing Brian Wilson and Buster Posey jump into each other's arms after the final out of Game Five always gives me the goosebumps when watching something about the Giants' dynasty of recent years.

Number Three: 2014
End Result: Giants over Royals in seven
Why? Oh my god was this series insane. It went back and forth and came down to the final play. It was nail-biting all the way through.
Favorite Moment: Giants second baseman Joe Panik helped turn an insane double play in Game Seven that helped San Fran keep the 2-2 tie at the time. It went through a bunch of replays before finally being called a double play.

Number Two: 2011
End Result: Cardinals over Rangers in seven
Why? This was a World Series that will be remembered for the Cardinals' clutch batting towards the end of Game Six. They escaped two situations in which the Rangers were a strike away from a World Series title. The entire series was full of history and although I wanted the Rangers to win, they still gave it a fight.
Favorite Moment: David Freese's 12th-inning walk-off homer is the single most important home run I have ever witnessed firsthand, because it was the first baseball history moment that people will ask me where was when I saw it and who I was with at the time. It was that momentous!! 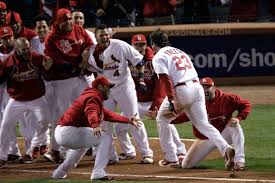 Number One: 2016
End Result: Cubs over Indians in seven
Why? What other World Series was it going to be? It had great moments and two gigantic World Series droughts were on the line. I was extremely happy for the Cubs when they won and the Series as a whole revived baseball just a little bit.
Favorite Moment: Easily the World Series-clinching ground ball fielded by Kris Bryant and thrown to Anthony Rizzo. What a time for the city of Chicago. 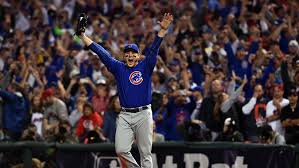