Last Sunday, Jered Weaver of the Los Angeles Angels pitched the first "Maddux" of 2016! I know, when I read that he did that, I didn't know what a "Maddux" was either. After some research, I found that a "Maddux," named after the great Greg Maddux, happens when a pitcher pitches a complete game shutout while only throwing 99 pitches or less. The term was coined by journalist Jason Lukehart, who loved to watch the Atlanta Braves legendary pitcher play, in 1998, when he came across a game in which Maddux pitched a complete game shutout while using less than 100 pitches.

To finish up this post on a new and cool statistic, here are five facts about pitchers pitching a "Maddux."

1. The active leaders in pitching a "Maddux" are Henderson Alvarez, Bartolo Colon, and James Shields, who each have four.

2. Obviously, walks are pretty detrimental when it comes to pitching a "Maddux," which explains why 57.7% of them (172 of 298) have been accomplished walk-less.

3. Roy Halladay pitched the only extra inning "Maddux" on September 6, 2003 against the Tigers. He went ten innings on 99 pitches that day and his Blue Jays won, 1-0.

4. Don Larsen's perfect game in Game Five of the 1956 World Series was a "Maddux," having only thrown 97 pitches that day in the Yankee win. In fact, there have been four other "Maddux" perfect games. Those were thrown by Dennis Martinez, Kenny Rogers, David Cone, and Philip Humber.

5. John Lieber holds the record for the fewest pitches pitched during a "Maddux" with 78. This amazing performance came on May 24, 2001 when he was pitching for the Cubs against the Reds. He held Cincinnati to just one hit all game.

Isn't this an interesting stat? I certainly think so. Thanks for reading this post and I hope you enjoyed it. Check back soon for more of "all the buzz on what wuzz."
Posted by Matt Nadel at 4:13 PM No comments:

Five of the Greatest-Hitting Pitchers Ever 6/14/16

Recently, NL pitchers Madison Bumgarner and Jake Arrieta have been asking the MLB to include them in the Home Run Derby during the All Star festivities in mid-July. This got me thinking: who are some of the greatest hitting pitchers in baseball history? Well, here are five of those pitchers in no particular order.

Number One: Don Larsen
Why? Yeah, the guy who pitched the only perfect game in World Series history in 1956 with the Yankees wasn't that bad of a hitter. He batted .242 in 596 career at-bats with an astounding slugging percentage (for a pitcher) of .371.

Number Two: Carlos Zambrano
Why? Zambrano may have been mostly known for his fire on the mound, but he could hit with fire, too. His six home runs in 2006 tied a Cubs franchise record, first set by Hall of Famer Fergie Jenkins in 1971. Big Z actually hit out 24 home runs during his rocky career, which ranks tied for seventh on the all-time list of most homers hit by a pitcher.

Number Four: Don Drysdale
Why? He's in the Hall of Fame for his pitching ability, but his 29 career home runs sit right atop Zambrano on the all-time list. He reached double-digit RBIs in five seasons, posting a high of 19 in 1965. 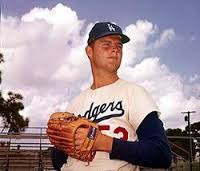 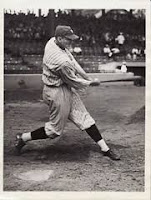 Number Five: Wes Ferrell
Why? Wes Ferrell was such a great hitter that his position description on his Baseball Reference page reads, "Pitcher and Pinch Hitter." His 38 career home runs are tops among all pitchers in history and his .280 lifetime batting average is not too shabby as well. 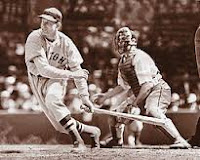 If these pitchers along with other great-hitting pitchers participated in a Home Run Derby of their own, what do you think would happen? Leave your thoughts in the comments section below. Thanks for reading this post and I hope you enjoyed it. Check back soon for more of "all the buzz on what wuzz."
Posted by Matt Nadel at 8:14 PM No comments:

Hall of Fame pitchers pitch for a long time, on average. Usually, their careers last about 20 years, which is a sufficient amount of time to pick up as many accolades as possible. However, there are a couple of pitchers who have pitched for a lot less than 20 years and are still immortalized in Cooperstown, one of them being the great Catfish Hunter.

Jim Hunter, better known as Catfish for his love of catching catfish, was awesome. His career from 1965-1979 with the Kansas City/Oakland A's and New York Yankees may have been short for a Hall of Famer, but it featured so many accomplishments, it's hard to remember all of them. Hunter actually didn't start off too well, as he began his career with five straight seasons of a .500-or-less winning percentage. Nonetheless, he still made two All Star appearances in 1966 and 1967 as a member of the Athletics. In 1970, his numbers started to look good, posting an 18-14 record and getting another All Star appearance. From that season on, he was unstoppable.

From 1971-1975, he never won less than 21 games in a season and his highest ERA during the 5-year span was 3.34. He even led the league in ERA in 1974 with a 2.49 ERA. That season, Hunter won 25 games and the AL Cy Young Award. After the 1974 season, Hunter became one of the first must-have pitchers in the free agent era. He ended up signing with the Yankees and played for them for five seasons. His first season with the Yanks saw his last year of 20 or more wins, but he still led the league with 23 of them. He would continue to dominate on the mound until his retirement in 1979. He finished his career with a record of 224-166 with a 3.26 ERA.

Hunter's playoff performances were also pretty solid. He appeared in six World Series, three with the A's and three with the Yankees, and posted a record of 5-3 with a 3.29 ERA. His best World Series was in 1974. After saving Game One, he started Game Three and put up a masterful performance. Hunter went 7 1/3 innings, allowed only one earned run, and struck out four in an eventual 3-2 A's win over the Dodgers. Because of his great pitching and the juggernaut teams he played with, he won five World Series championships during his career. Oh, and I haven't even gotten to his best career accomplishment: his perfect game! Hunter started for the A's on May 8, 1968 at home against the Twins. That day, he didn't allow a single runner to reach first base and struck out 11 batters. He was just 22 years old when he pitched the perfecto, making him the youngest pitcher even to throw a perfect game in the World Series era.

Hunter, deservedly so, was inducted into the Hall of Fame in 1987 and has his #27 retired by the A's. I hope you enjoyed this post and thanks for reading it. Check back soon for more of "all the buzz on what wuzz."
Posted by Matt Nadel at 2:05 PM 1 comment: