Hey baseball fans!
It's Derek Jeter's birthday! However, because I'm sure some of you think I love him a little too much, we're not going to discuss the Captain today. Instead, let's talk about one of the best players who played in the state in which Jeter grew up. Yes, Mr. November is from New Jersey and rooted for the Yankees, but he attended and was drafted out of Central High School in Kalamazoo, Michigan. Let's see: who's an awesome player who played for the Tigers? Oh, of course! It's Mr. Tiger, Al Kaline!
One of the premier contact hitters of the 1950s and 1960s, Kaline bridged the gap between Tigers eras that were ruled by Hank Greenberg in the 1930s and 1940s and the double play duo of Alan Trammell and Lou Whitaker in the 1970s and 1980s. But Kaline wasn't just a bridge. He could really hit, too! Al Kaline is the youngest hitter in American League history to win a batting title, for starters. In 1955, at the age of 20, Kaline led the Junior Circuit with a .340 batting average. It would end up being the only season in which he led the league in average, but he batted over .280 in all but five of his remaining seasons in the MLB. That 1955 season for Kaline also saw him win his only hits title, totaling 200 for the season, but would average 137 hits a season for his entire career. Yes, that number is lower than average for a contact specialist, but because he played for 22 seasons, 1953-1974, he made it to 3,007 hits, good for 31st on the all-time list. But Kaline wasn't just a great hitter. He was also an exemplary outfielder. He won ten career Gold Gloves (in an eleven-year span) and was revered by the rest of the league for his prowess in right field. All in all, he made 18 All Star Games and was inducted into the Hall of Fame in his first year of eligibility, 1980, with 88.3% of the vote.
But arguably his most shining achievement in a Tigers uniform came during 1968, when he put up a World Series performance for the ages. 1968 was the first year he hadn't made an All Star Game since that amazing year in 1955, so many people around the league thought he was nearing the end of his career. But boy,did Kaline rebound in the World Series. Sure, the '68 Series is known for amazing pitching from Tigers legend Mickey Lolich, but Kaline's hitting in the Fall Classic against the Cardinals was historic. In the seven-game set, Kaline collected 11 hits, which was good for a .379 batting clip, with two homers and eight RBIs. Detroit ended up winning the franchise's third World Series that year, as Al Kaline cemented himself as Mr. Tiger. 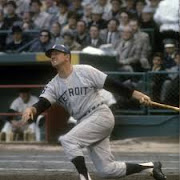 After retiring in 1974, Kaline worked in the Tigers broadcast booth until 2002, at which time he switched to the front office until his death in April of this year. Kaline epitomized consistency and all-around play, which is why he is known as one of the best to ever lace up cleats at a professional level. Thanks for reading this post and I hope you enjoyed it. Check back soon for more of "all the buzz on what wuzz."
Posted by Matt Nadel at 12:41 PM No comments:

Hey baseball fans!
Carl Yastrzemski is one of the greatest hitters in Red Sox history, but he was not the only star outfielder that graced the grass of Fenway in the 1960s. The Red Sox used to have a right-handed hitter by the name of Tony Conigliaro. Conigliaro was a great hitter for the first few years of his career, and looked to continue that trend deep into that 1967 "Impossible Dream" season for the BoSox. Then, in August of that season, tragedy struck.
Tony Conigliaro debuted in Boston in 1964 at the ripe age of 19. He didn't place for Rookie of the Year voting, but he did hit 24 home runs that year and batted .290. Those 24 home runs are a record among teenage hitters in baseball history, getting Red Sox fans excited for a possible World Series championship in the coming years, something they hadn't experienced since 1918. Conigliaro continued his power at the plate in subsequent years, hitting a league-leading 32 homers in 1965 and a respectable 28 home runs in 1966. In 1967, the Red Sox right fielder made his first All Star Game, reaching 20 homers by mid-August, and became the second-youngest hitter ever to 100 career home runs (only behind Mel Ott). Then, on August 18, 1967, in a home game against Angels pitcher Jack Hamilton, Conigliaro was struck by a pitch on his left cheekbone, which left him with a broken jaw and a damaged retina. Conigliaro wasn't wearing a helmet with an ear-flap that we see often today, but it's this specific incident that actually made that flap so encouraged for hitters. Conigliaro was forced to sit out the entire 1968 season. Although he returned in 1969, winning Comeback Player of the Year with 20 homers and 82 RBIs, he was not the same hitter as before. 1970 was his last great year, when he collected career highs in home runs (36) and RBIs (116). After that, he fizzled out due to his deteriorating sight. He died in 1990 at 45 years old.
Not only was Conigliaro not in the Red Sox lineup for the 1967 World Series, but had he played a full career, he would've most likely been with the Sox for the 1975 World Series. Both the '67 and '75 Fall Classics went seven games, so it's justifiable to say that had Conigliaro not gotten so tragically injured, the Red Sox would've broken the Curse of the Bambino long before events involving Mookie Wilson or David Ortiz. Thanks for reading this post and I hope you enjoyed it. Check back soon for more of "all the buzz on what wuzz." 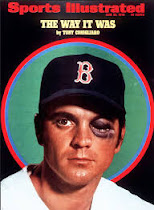 It's a somber time to be a baseball fan for plenty of reasons, so I wanted share my story of how I fell in love with America's pastime. I don't think I really talk about how I got involved with the game much, but it's a story worth telling.

Back in 2007, Hall of Fame manager Joe Torre and the New York Yankees were in the American League Division Series against the Cleveland Indians. The Yanks had stars like Derek Jeter and Johnny Damon, while the Indians had recognizable names such as CC Sabathia and Victor Martinez, among others, on their roster. The Indians would go on to win the series, then lose to the Red Sox in the ALCS. I was eight years old at the time, beginning the third grade. I remember liking one of my third grade teachers, Mrs. Nathan, a lot. We  were learning where to put commas in numbers with more than three digits, and I taught the class a trick my mom taught me. 1, 2, 3 kick, 1, 2, 3, kick, which is to say that after every three digits, you put a comma. Mrs. Nathan liked that trick so much, that she invited me to the front of the class to do a kick line with her. I was embarrassed at the time, but it's certainly funny looking back. The mantra would help me remember how to correctly write down the multimillion-dollar contracts that MLB players would soon receive.

One school night, my dad was watching one of the games of the 2007 ALDS in his bedroom. I can't recall how I ended up watching the game with him, or whether it was the "Joba Chamberlain Gnats Game" in particular, but I remember being absolutely hypnotized by the game of baseball, jumping up and down on my parents' bed like a monkey. Soon after the Yankees got eliminated from the postseason that year, I got my first baseball video game, MLB Power Pros 2007 for the Wii. It was an amazing game, a game I still play to this day, despite the unrealistic home run robbery animations or the lack of difficulty, and a game that helped shape my love of baseball even further. The next year, I switched schools because my old one closed down. So, I had to make some friends in the new one through the only way I knew how: baseball. We were fourth-graders, so it wasn't like we were talking about sabermetrics, but the conversations were definitely complex for a non-baseball fan. That was also the time I started researching more into baseball's past, solidifying my stance as a Yankees fan.

The Yankees moved into a new stadium in 2009. I went to the first Spring Training, regular season, and World Series game at the new Yankee Stadium, and all three were a blast (even though the Yanks lost the two games that counted). 2009 was the Year of the Walk-Off in the Bronx, so I used to stay up late, switching to reruns of the George Lopez Show on Nick at Nite during YES Network commercials, as I watched the Yankees win in the clutch night after night. As I walked into the House That the Boss Built for Game One of the 2009 World Series, I saw that the Yankees had played in the Fall Classic against the Phillies once before '09. This I was unfamiliar with, and immediately asked my grandpa, who grew up in the Bronx, what that was about. He vaguely remembered the 1950 Phillies, who were called "The Whiz Kids" because they were so young, but he more so remembered the teams from his younger days, teams with Ruth, Gehrig, and DiMaggio. He told me all about those winners of the 1920s and 1930s, as my other grandpa told me about how he used to listen to the Dodgers while growing up in Cuba. It was a whole lot of information for a fledgling fifth-grader to grasp, but I knew I wanted more.

I started Baseball with Matt three years later, on April 2, 2012, about a month after my bar mitzvah. I became an MLB pro blogger that October and a published author three years after that. Baseball has become my life, my anchor, and my passion in my 13 years of fandom, and it means so much for so many other people. In these confusing times, I encourage you to ask people about how they fell in love with baseball, or about any hobby or interest that has a unifying sense, because if there's one thing that we all need right now, it's a little bit of unity.

Thanks for reading this post and I hope you enjoyed hearing my story. Check back soon for more of "all the buzz on what wuzz."

Stay safe, keep yourselves educated on what's going on, and just keep swinging.