I Didn't Know That Mites Could Play Baseball 7/2/14

The Chicago White Sox were not the best team in the 1950s, but they did have Hall of Fame shortstop Luis Aparicio. Then again, the ChiSox had another Hall of Fame middle infielder: Nellie Fox! In case you don't know who he is, let me explain.

Jacob Nelson "Nellie" Fox was an awesome second baseman for the Athletics, Sox, and Astros from 1947-1965. In fact, he was so awesome that he won the 1959 MVP Award and led the Sox out of mediocrity to the World Series! Although the Go-Go White Sox lost that Fall Classic to the Dodgers, "Mighty Mite" (as he was nicknamed because of his small stature, yet amazing hitting) was still loved in Chicago and I can totally understand why. The twelve-time All Star collected 2,663 career base hits and batted .288 lifetime. He led the league in hits four times, at bats five times, and plate appearances five consecutive times. He also won three Gold Gloves and paired up with Luis Aparicio to form one of the best middle infield combinations that baseball has ever seen. 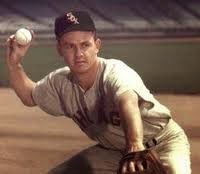 Fun fact about Nellie: he holds the record for the most consecutive years of leading the league in singles. The record is seven years, from 1954-1960. Anyway, thanks for reading this post. I hope you enjoyed it and check back in a few days for more of "all the buzz on what wuzz."
Posted by Matt Nadel at 8:28 AM