Have they ever come close?
Yes, plenty of times. The Padres have actually thrown 30 one-hitters, including six that were no-hitters entering the eighth inning. But there have also been some other close-but-no-cigar moments. On July 18, 1972, Steve Arlin was one out from a no-hitter against the Phillies, when he gave up back-to-back singles to finish with a two-hitter. On July 9, 2011, the Padres almost had a combined no-hitter, but lost it with an out to go and eventually lost the game, too.

What's the problem?
Well, the Padres are notorious for their droughts. Besides their empty World Series trophy case, the Padres took almost 45 years to record a cycle. Matt Kemp finally broke that stretch in 2015. They also don't have a single Hall of Fame starting pitcher in Cooperstown.

Are they a bad franchise?
Absolutely not. They have one of baseball's most innovative ballparks, they operate like baseball's biggest small market team, and have a killer mascot and uniform set. In addition, with their big signings of Manny Machado and Eric Hosmer, you could see the Friars back in the postseason this year for the first time since 2006.

Pirates pitcher Doc Ellis (pictured below) threw a no-hitter against the Padres while under the influence of hallucinogenics?
Indubitably.

I should probably mention that this streak of no no-hitters is the longest such active streak in baseball and no other baseball franchise has had to wait this long for their first no-no. Hang in there, Padres fans. We're here for you if you need us. Thanks for reading this post and I hope you enjoyed it. Check back soon for more of "all the buzz on what wuzz."
Posted by Matt Nadel at 8:55 AM No comments:

I'm officially done with sophomore year of college! In honor of this, it's time I tackle a subject that has been debated by myself, my friends, and my family for as long as I can remember: pitching Hall of Fame legitimacy. And which pitcher will I be using to demonstrate this legitimacy? Justin Verlander, of course!

Unlike the 3,000 hit cub and the 500 home run club, which are filled with hitters from across baseball's storied timeline, certain pitching clubs have been pretty exclusive for quite some time. The best examples of this is the 400-wins club and the sub-2.00 ERA club, which haven't been touched in almost a century. That being said, however, there are pitchers who have been elected into the Hall of Fame over the past 100 years (surprising, I know) based on other benchmarks. Yes, I could go into the advanced pitching statistics, but you know I love going back to the basics.

Winning 300 games is an automatic Hall of Fame bid, but so is 250 and 200 wins, depending on the era and competition. The same thing goes with an ERA lower than 3.00, 3.5, and even 3.75. It honestly depends on the pitcher, but combining some Hall of Fame pitchers' statistics gets you to Justin Verlander's numbers, including his mid-career slump and his late-career resurgence. For a direct visual of JV's stats, click here.

Roy Halladay's Win Total
Halladay will be officially inducted into the Hall of Fame this July and it was no shock that he got the required 75% for induction. He totaled 203 wins during his 16-year career and a winning percentage of .659. The key number there is really "16." Halladay topped 200 career wins in his final season, but Justin Verlander already has 200+ career wins (211 to be exact) and he's only played 15 years. Of course, wins is a very controversial statistic at the moment, but you can't deny the validity that the stat still provides. On top of this, Verlander is likely to climb the wins and quality starts leaderboard even more before he retires.

Mike Mussina's ERA
Mussina was the second pitcher elected into the Hall via the BBWAA this past January, but his election was met with skepticism. A lot of people didn't want him in the Hall because of his 3.68 ERA. The people who did want him in the Hall contended that he faced an extremely tough AL East division throughout his entire career. I admittedly was a part of the former group, but Mussina's in the Hall. Verlander's career ERA is a solid 3.37, which also puts him ahead of Halladay (3.38), who pitched in the same era as Verlander and also faced a tough AL East for a majority of his career. Verlander's divisional opponents haven't been as great as that of Mussina or Halladay, but a 3.37 ERA is objectively good, plain and simple.

Other Accolades
Verlander is a two-time AL wins leader and a seven-time All Star and he was also an MVP! Additionally, he's on his way to 3,000 career strikeouts, which is an achievement that not even 20 pitchers in baseball history have reached. There are also the intangibles. I bet you that guys like Joe Mauer and Paul Konerko, two borderline Hall of Famers, will tell you that Verlander was one of the best pitchers they ever faced.

In conclusion, there is no single benchmark for pitchers, which is why I don't acknowledge a pitching precedent, unlike I do for hitting. Again, you can get into the more new-age stuff to determine precedence, but I consider the situation to be a case-by-case basis, which makes Verlander a Hall of Famer, even if he retired right at this moment. Thanks for reading this post and I hope you enjoyed it. Check back soon for more of "all the buzz on what wuzz."
Posted by Matt Nadel at 4:40 PM No comments:

You may not realize it, but some MLB team names aren't in the average person's vernacular. So, for everyone who falls under this category, this post is for you.

Team Name: Yankees
Meaning: Either someone from the Northeastern United States or a soldier for the Union during the Civil War.

Team Name: Orioles
Meaning: It's an orange and black bird that happens to be Maryland's state bird. This is more of an "I don't know this bird species" situation rather than a specific definition, but still.

Team Name: Mariners
Definition: A sailor. You can remember it by looking at the root of the word, which is "marine."

Team Name: Mets
Definition: "Met" is short for metropolitan, which refers to an urban area.

Team Name: Marlins
Definition: Another "oriole" situation, a marlin is a fish native to the Caribbean. The name comes from a tool used by mariners (yes, I did mean to use that synonym for sailor) called a marlinspike.

Team Name: Padres
Meaning: I saved the most archaic team name for last. The Padres are named for the Spanish Franciscan friars who founded San Diego in 1769. "Padre" is the Spanish word for the priestly title of "father." 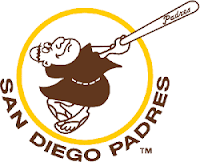