It’s time to talk about something I haven’t ever discussed on Baseball with Matt and for good reason. However, I feel like the following topic is important to address at this moment because of my list of the best Hall of Fame hitters in baseball history and why it’s restricted to only Hall of Famers. That’s right: let’s talk about steroids.

A lot of people have their opinions on steroids, but I find that a lot of people don’t have the information to back their opinions up. So before I tell you what I think about performance-enhancing drugs, here are the facts. From 1962-1994, just three players hit over 50 homers in a single season. But once the late ‘80s and early ‘90s came and went, home run numbers started to skyrocket. MLB executives probably had an idea of what was going on, which is why they banned the use of steroids in 1991. However, drug-testing didn’t start until 2003. So there was a period of 12 years when steroid users could operate above the law, so to speak. Coincidentally, Sammy Sosa and Mark McGwire had their crazy race towards breaking the single-season home run record in 1998 and these twelve years were also the beginning of the out-of-this-world career of Barry Bonds.

Jose Canseco, a famous steroid user and McGwire’s former teammate on the A’s, stated that 80% of the hitters he played with took steroids, while others claim the numbers are lower but still bad, around 40-50%. From 1998-2009, the 500 home run club got 10 new members, which is insane because between 1987, when Mike Schmidt hit homer number 500, and 1996, when Eddie Murray accomplished the feat, not a single hitter joined the 500 home run club. Seven of those ten hitters have since been accused or proven to be steroid-takers: Bonds, McGwire, Sosa, Alex Rodriguez, Manny Ramirez, Rafael Palmeiro and Gary Sheffield. Even other hitters of the era, like Mike Piazza and Jeff Bagwell, had their Hall of Fame election delayed because of steroid skeptics. But, no hitter positively associated with PEDs has been elected into the Hall of Fame, let alone any pitchers. Although some of the all-time greats just based on their numbers may be getting close, as Barry Bonds and Roger Clemens have seen their Hall of Fame numbers rise ever since they got on the ballots.

The main argument I’ve heard for letting players linked to steroids into the Hall is that because there’s no way to prove that players before steroids were banned actually took steroids, you can’t discriminate against the players who we know took steroids, despite the fact that they took steroids. Although that is true, like I said before, look at the numbers. When guys like McGwire, Sosa, and Bonds joined the league, home run numbers went up so much that rules had to be changed. On top of this, even if someone like Babe Ruth took some sort of performance-enhancing drug, back then, it was legal. It’s not like he was breaking any rules. It’s not like he cheated.

So, how do I feel about steroid users? Because PEDs have been illegal since 1991 and some of the aforementioned members of the 500 home run club have made it an extremely big deal to admit to their use of steroids and have admitted that they used the substances regrettably, steroid users do not belong in the Hall of Fame. They themselves have told the public that they cheated, so that’s what I think of them as well. Even for guys like Andy Pettitte and Robinson Cano, guys who I grew up watching as a die hard Yankees fan, their career stats must be taken with a grain of salt. I hate saying that, but the members of the Hall of Fame who may or may not have used substances legally do not deserve to have their statuses tarnished by a terrible era for the reputation of baseball. This is the stance I’ve always had about steroids and it’s how it will always be. It’s why I’ve never mentioned Barry Bonds’s name in any blog post I’ve ever written and it’s why I never plan to do so after today.
Posted by Matt Nadel at 11:16 AM 1 comment:

Welcome to the Top 15! It's such an exciting time during the summer, as we near the end of my top 50 Hall of Fame hitters in baseball history. But anyway, let's get to it!

#15: Wade Boggs
Boggs is the AL hitting machine successor to Rod Carew. Both hitters had crazy batting averages and made a ton of All Star Games. Boggs went to twelve Midsummer Classics from 1985-1996, led the league in batting average in five seasons, and batted a staggering .328 lifetime. It took Boggs 11 years to bat under .300 (.259 in 1992) in a season and he only did that two more times in his entire career. His 3,010 career base hits rank 30th on the all-time list and, overall, he's one of the most heralded hitters in Red Sox history.

#14: Roberto Clemente
Batted .317 lifetime. 3,000 hits on the dot in only 17 years in baseball. Four-time batting champion. Had over 200 hits in a season on four occasions. Won 12 consecutive Gold Gloves for the outfield from 1961-1972. 12-time All Star. Two-time World Series champion. Most beloved hitter in the history of the Pittsburgh Pirates. But most of all, gone too soon, just because he had a charitable soul. Rest in peace, Roberto.

#13: Frank Robinson
There's Hank Aaron and Willie Mays, but there's also Frank Robinson. One of the more unsung power hitters of the 1950s and 1960s, Robinson could slug the baseball with the best of them. His 586 home runs rank tenth on the all-time home runs list and his 1,812 RBIs and .294 career batting average aren't so bad, either. He was the first hitter in baseball history to win the MVP in both leagues (1961 with the Reds and 1966 with the Orioles), even winning the Triple Crown in '66 with Baltimore. He hit 30 or more homers in 11 seasons and led the league in slugging percentage in four seasons. To top it all off, he's the first black manager in baseball history.

#12: Tony Gwynn
Sorry, Wade Boggs, but it's Tony Gwynn who actually owns the highest batting average out of all the ballplayers who debuted after 1950. Gwynn's .338 lifetime batting average is 18th on the all-time list, leading the league in batting eight times, even batting .394 at the age of 34 in 1994. Gwynn led the league in hits seven times and his 3,141 career base knocks rank 19th all time. On top of all of this, "Mr. Padre" is the only member of the franchise to participate in both of the team's World Series appearances, 1984 and 1998.

#11: Cal Ripken Jr.
Ripken played in 2,632 consecutive games, a record that will most likely never be broken. Don't get me wrong, this is an amazing achievement, but Cal is way more than a games played streak. For example, did you know that he is 15th on the all-time hits list with 3,184 hits? Did you know he hit 431 career home runs? Did you know he made 19 straight All Star Games? Did you know he's a two-time MVP? Did you know he's probably the most celebrated hitter in the history of the Orioles? Maybe you did, maybe you didn't, but either way, what a career for "The Iron Man."

Next post is the top ten! What do you think of the list so far? Leave your thoughts in the comments section below. Thanks for reading this post and I hope you enjoyed it. Check back soon for more of "all the buzz on what wuzz."
Posted by Matt Nadel at 5:54 PM No comments:

We're getting to the point where the names on this list will be some of the most famous in baseball history! I'm so excited that we've finally reached my top 20 Hall of Fame hitters! Let's get started with this post with #20!

#20: Mickey Mantle
The Commerce Comet is not only my favorite of the Yankees' historical "Big 4," but also the youngest. From 1951-1968, Mantle smacked 536 homers out of the park, good for 18th on the all-time list. The 1956 AL Triple Crown winner and three-time MVP had 30 or more homers in a season nine times, eight of them being consecutive. The most underrated stat about Mantle is his record 18 World Series home runs and his seven World Series rings rank tied for seventh all time.

#19: Ken Griffey Jr.
As good as his dad was, Junior was infinitely better. His 630 home runs puts "The Kid" in seventh place on the all-time home runs list. Yes, he was injury-prone when he went to play for his hometown Reds, but he will always be remembered for his time with the Mariners. Griffey played 11 seasons in Seattle, making ten straight All Star Games from 1990-1999, winning seven Silver Slugger awards and ten straight Gold Gloves. The four-time home run champ wasn't even on Seattle's 116-win team in 2001, but could you imagine if he was? 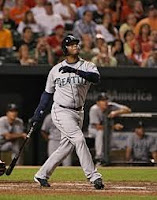 #18: Mike Piazza
Let this be known to all who choose to argue with me: Mike Piazza is the greatest hitting catcher in baseball history and, to be frank (sorry, Johnny Bench), it's not even close. His 427 homers rank first all-time amongst catchers, his 1,335 RBIs rank second, and his .308 batting average is third all-time for backstops. Sure, Ivan Rodriguez, Mickey Cochrane, and Bill Dickey are also great, but Piazza was a revolutionary talent. Ask anyone from the 1990s to confirm that last statement because I'm sure they will do so gladly.

#17: Tris Speaker
In his 22-year career from 1907-1928, "The Grey Eagle" was one of the best hitters of his era. His 3,514 career hits rank fifth on the all-time list and his 792 career doubles actually rank first all time. It's not a record you think about like other records, but for the Dead Ball era especially, it matters a lot. In fact, Speaker's .500 career slugging percentage is up there with some of the other hitting greats that played during the dawn of the World Series era. Oh, and his .345 lifetime batting average wasn't that bad, either.

#16: Eddie Murray
This is probably a very controversial pick, but let me say this: Eddie Murray is one of the most underrated hitters in baseball history and the reason is quite simple. There are three Hall of Famers with 500+ homers and 3,000+ hits, making them twice as worthy for the Hall of Fame. Two of them are Hank Aaron and Willie Mays and you won't see them on this list for a couple of weeks. The other one, with 504 career homers and 3,255 career hits, is none other than "Steady Eddie" Murray. The eight-time All Star batted .287 lifetime and in the strike-shortened 1981 season, led the AL with 22 homers and 78 RBIs. He's not the best Oriole that will appear on this list, but he is certainly up there.

What do you think of these players' rankings? Let me know in the comments section below. Thanks for reading this post and I hope you enjoyed it. Check back soon for more of "all the buzz on what wuzz."
Posted by Matt Nadel at 1:39 PM No comments: