It's my birthday, which means it's time to talk about my Hall of Fame birthday buddy, Alan Trammell! I've done a post about Trammell pretty much every February 21st since I started my blog in 2012, so this birthday will be no different! Today, rather than just go over his career for the 1,000th time, let's take a deep dive into why he deserves to be a Hall of Famer based on the three categories I use to judge Hall of Fame candidacy: longevity, consistency, and intangibles. 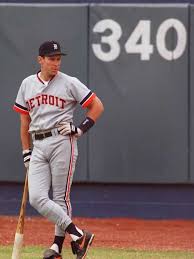 Trammell did play for a while, I'll give him that. But that's not what longevity actually means in this case. How close was Trammell to the Hall of Fame benchmarks we have come to know and love? Well, the short answer is not at all, at least in the offensive department. 2,365 career hits isn't close to the 3,000-hit threshold, especially considering he played 20 years. The cumulative stat that he has actually met is defensive wins above replacement. dWAR is a newer stat in the Hall of Fame conversation, considering fielding gurus like Andruw Jones and Scott Rolen only just made the ballot, but it's an important stat nonetheless. You don't have to be good at everything to be a Hall of Famer, so even though Trammell's cumulative hits aren't there, his 22.7 career dWAR (which is 33rd on the all-time list) at a premier position like shortstop certainly puts him in the conversation, not to mention his 70.7 career total WAR is in the ballpark of that of Derek Jeter.

The consistency category marginally helps Trammell more than the longevity category, even though it's less important. A .285 lifetime batting average and 152 hits a season during his prime years from 1980-1990 make it known that Trammell was a consistent hitter. But other than those stats, why is Trammell a Hall of Famer? We can talk about his six All Star Games, three Silver Sluggers, or four Gold Gloves, but that's not enough. Again, I ask the question: why is this guy a Hall of Famer? The answer lies in the piece I've left out of this post so far on purpose: he's a legend in the Detroit Tigers organization. Sure, he's one of their worst managers ever, but the lifelong Tiger meant more to the city of Detroit than a lot of baseball fans realize. You can't tell the history of the Detroit Tigers without mentioning the 1984 World Series MVP. Although the intangibles category is the least important criteria for me for Hall of Fame candidates, it matters the most in Trammell's case.

The 2021 Hall of Fame inductees have been released and, to be honest, I'm not surprised that no one got in. Schilling's stock fell a lot after the Capitol riots and I expected the steroid-users not to move up that much. There were a couple of big risers, but again, it makes sense that the 2021 Hall of Fame induction ceremony will only feature the 2020 inductees. But who's on the ballot next year?

There are several very interesting first-timers on next year's ballot, namely Alex Rodriguez and David Ortiz. Both have steroid scandals associated with their careers, but Ortiz's has been called into question by reliable sources, a la Commissioner Manfred, and Rodriguez has seen a personal resurgence post-retirement, mostly from television appearances. It will be interesting to see how the voters view these two mega-stars, especially compared to Barry Bonds and Roger Clemens, who will be on the BBWAA ballot for the last time in 2022.

Other notable first-timers who I think could see some significant voting percentages include Jimmy Rollins, Mark Teixeira, A.J. Pierzynski, Ryan Howard, Joe Nathan, Prince Fielder, and Jonathan Papelbon. Out of this group, I'm really rooting for the relievers, Nathan and Papelbon. As we move deeper into the Age of the Bullpen, relievers of all kinds will start getting the recognition they deserve. I was a massive advocate for Trevor Hoffman's induction and just talked about Billy Wagner, so to say that I "like bullpens a little" would be a gross understatement. I think that A.J. Pierzynski actually has the best shot out of the hitters that I just named because he was a catcher, so his numbers should be taken with more than just one grain of salt. 2,000+ hits and a .280 batting average as a catcher are impressive stats. I'm not sure if he has the recognition to get into the Hall via the BBWAA, but we'll have to wait and see.

And then, besides the first-timers who won't see more than 10%, we have the guys who have been on the ballot for a while. Todd Helton and Scott Rolen saw huge jumps during the 2021 voting, Omar Vizquel's number went down because of his ongoing domestic abuse scandal, and Jeff Kent only rose a little. It seems that Helton and Rolen have the momentum to make it in before their times on the ballot are up and both of them have plenty of time to do so, but it won't be next year. What I am excited for, however, is to see how far their numbers do jump.

Posted by Matt Nadel at 4:36 PM No comments: