With the MLB officially starting late as of yesterday, it's time for the league, the fans, and anyone else who cares about America's pastime to come up with alternative scenarios regarding how the season should play out. So, here's mine. Note: I am assuming that the 2020 season will happen, and am keeping information in mind regarding the recent MLB-MLBPA agreement.

Even if it's without fans, it looks like the MLB season could start as early as June, but I'm going to say that it starts on July 1st. I think it's a terrible idea to do scheduled double-headers in this day and age, unlike in years past (I'm talking before WW2). I mean, you thought the Yankees were so injured before? Just wait until they have to start playing 14 games in seven days. However, I do think that a four-month season is acceptable and adaptable to service time, contracts, and any other time-related factors that go into a baseball season. Why do I say four months, you ask? Well, the 1981 MLB strike caused a stoppage of play, shortening the season to, you guessed it, four months. Obviously, this stoppage is much different than the one now, but we've seen a four-month MLB season in the past, and at the current moment with the information we have, I think it makes the most sense.

So, July 1st to October 31st would be the MLB regular season. The All Star Game would be moved to late August and the trade deadline to mid-September. The postseason would stay in the exact same format, but with less off-days if the matchups allow for it. A Yankees-Red Sox playoff series can be played across seven days, but a Mariners-Rays series might take nine or ten days (barring both series going to seven games). If the weather is closer to winter weather than Thanksgiving weather by late November, the World Series would be held at a neutral site, whether that site be domed (like Miller Park in Milwaukee) or in a hot location (like Dodger Stadium in LA).

I don't think it's a secret that this upcoming season is going to be one for the history books for all the wrong reasons, but it shouldn't be delegitimized, if it's played. The Dodgers' 1981 World Series championship over the Yankees is completely valid, as are the 1994 MVPs won by Frank Thomas and Jeff Bagwell, even without the '94 playoffs (and Albert Belle's 50 homers in 1995 are just iconic). It's just up to us to make the best of it. Stay strong and safe, baseball fans.

Thanks for reading this post and I hope you enjoyed it. Check back soon for more of "all the buzz on what wuzz."
Posted by Matt Nadel at 4:34 PM No comments:

With the recent delay of Opening Day by Major League Baseball because of the spreading coronavirus, it got me thinking about how the MLB season has been changed in the past. 9/11 paused the 2001 MLB season for about a week, while the strikes of 1981 and 1994/1995 erased games and even introduced new playoff formats. But another historic event, World War II, didn't stop the MLB from playing its games, creating a wild race for the World Series, specifically in 1944, the penultimate year of the war.

President Franklin Roosevelt issued something called the "Green Light Letter," which asked baseball to continue operations amidst the global conflict known as World War II. The United States entered the war in December of 1941, after the Japanese bombed Pearl Harbor. So, to help the war effort, the US military issued a draft for males ranging from 18-37 years old. Well, even though the MLB didn't stop for World War II, the age of the eligible draftees made it so plenty of MLB players were drafted into the military. In total, over a period of five years, 500 major league and over 2,000 minor league players were drafted into the deadliest war in human history. For reference, the MLB was only 16 teams at the time, and major league roster sizes were 24 players, meaning that a massive, incomprehensible percentage of the MLB rosters at the time went to serve overseas. Some of the more famous MLB and WW2 veterans include Joe DiMaggio, Ted Williams, Yogi Berra, Hank Greenberg, and Stan Musial (pictured below in his sailor's uniform). 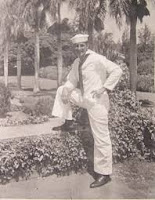 But Stan the Man didn't serve until 1945, meaning he was still on the Cardinals roster in 1944 to help lead them to the top of the National League. The 1944 St. Louis Cardinals were without future Hall of Famers Red Schoendienst (which is harder to spell than Yastrzemski, by the way) and Enos Slaughter, but still managed to win 105 games and the NL pennant on the back of baseball's best pitching staff, which allowed only 3.1 runs per game, and 1944 MVP and slick-fielding shortstop, Marty Marion. Those 105 wins (and 49 losses because of the 154-game season back then) actually proved to be baseball's best record, only because the rest of the league did absolutely nothing! After the Cardinals, the Pirates finished in second among the 16 teams in '44 with only 90 wins. And the AL was even worse! No team finished above 89 wins because of the shortage of talent, meaning that at the end of the season, it was the rest of the AL looking up at the St. Louis Browns.

Yeah, that's right: the St. Louis Browns, the present-day Baltimore Orioles! The AL, especially, was so dry of the talent that made baseball so beloved, that one of the worst teams in baseball history up to that point made their first World Series appearance. Of course, the Cardinals won the Series in six games, giving them their second of three titles in a five-year span from 1942-1946, but at least the Browns got to call themselves the best of the worst, you know?

Eventually, the MLB and the United States rejoiced in an Allied victory, and baseball returned to normal. The Browns moved to Baltimore for the '54 season and won the franchise's first championship in 1966. Thanks for reading this post and I hope you enjoyed it. Check back soon for more of "all the buzz on what wuzz."
Posted by Matt Nadel at 4:57 PM No comments: