Do you know what time it is?! It's time to talk about my 40th to 36th best Hall of Fame hitters in baseball history! Let's get on with the show, shall we?

#40: George Brett
Probably the greatest hitter in the history of the Royals, Brett collected 3,154 hits in 21 years in the bigs. He won the 1980 AL MVP, made 13 straight All Star games, and led KC to its first of two world championships in 1985. Fun fact: he's the only guy to get picked off after collecting his 3,000th career hit. Nonetheless, he was amazing.

#39: Paul Molitor
"The Ignitor" made seven All Star games with the Brewers and Blue Jays (and also batted .341 with the Twins in 1996 at the age of 39) and is tied with Pepper Martin for the highest lifetime World Series batting average at .418. The .306 regular season hitter broke the 3,000 hits barrier easily, finishing his career with 3,319 base knocks, good for tenth on the all-time list. 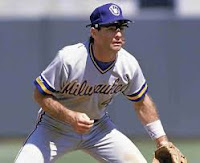 #38: Eddie Mathews
Despite being overshadowed by Hank Aaron for a majority of his career, Mathews was still one of the premier power hitters of his era. In just 17 years from 1952-1968, the Braves big bat smacked out 512 career home runs, good for an average of roughly 30 homers a season! He led the league twice in homers (47 in 1953 and 46 in 1959) and led the league in walks four times.

#37: Willie McCovey
McCovey had the same career as Mathews: lots of homers, but overshadowed by someone who will not appear on this countdown for another several weeks. McCovey is tied for 20th on the all-time home runs list with Ted Williams and Frank Thomas with 521 career dingers. McCovey led the league in homers and RBIs in back-to-back years in 1968 and 1969, winning the NL MVP in the later year. He also holds the record for the least amount of games played in a Rookie of the Year-winning campaign at only 52 games. But in those 52 games, he hit .354 with 13 homers.

#36: Jim Thome
One of the youngest and most underrated hitters on this list, Thome is the all-time leader in walk-off home runs at 13. In fact, the 500th home run of his career was a walk-off while playing for the White Sox. The all-time great with mainly the Indians collected a whopping 612 career home runs, good for eighth on the all-time list.

As always, let me know what you think of the list so far in the comments section below. Thanks for reading this post and I hope you enjoyed it. Check back soon for more of "all the buzz on what wuzz."
Posted by Matt Nadel at 8:51 PM 3 comments:

It's time to reveal the 45th to 41st best Hall of Fame hitters in baseball history (in my humble opinion, of course)! Who's ready? Let's do it!

#45: Willie Stargell
This 21-year veteran for the Pirates was a key contributor to the Buccos' 1971 and 1979 World Series championships. The 1979 NL MVP and seven-time All Star hit 25+ homers in a season on ten occasions during his career and topped 100 RBIs in five seasons. In terms of best Pirates ever, the .282 lifetime hitter is right up there with another Pittsburgh legend who will appear on this list soon.

#44: Rickey Henderson
Yes, Henderson is the all-time steals leader, but did you know that he also has 3,055 career hits and the all-time record for runs scored at 2,295? The ten-time All Star and 1990 AL MVP led the league in stolen bases in twelve seasons, including in 1998, when at 39 years old, he stole 66 bases for the A's.

#43: Al Kaline
The all-time Tigers leader in hits made the All Star Game in 13 straight years from 1955-1967. The .297 lifetime hitter even won ten Gold Gloves as an outfielder. He finished his Hall of Fame career with 3,007 hits.

#40-36 are coming up next, so get pumped! Thanks for reading this post and I hope you enjoyed it. Check back soon for more of "all the buzz on what wuzz."
Posted by Matt Nadel at 3:38 PM 1 comment:

It's time for Part 2 of my list of the top 50 Hall of Fame hitters in baseball history (and the first part that actually includes part of the list)! Without further delay, here are the first five entries to BwM's Top 50:

#50: Kirby Puckett
We're kicking off the summer festivities with one of the two best contact hitters the Minnesota Twins have ever had on their roster. Spoiler alert: the other one will appear on this list in several posts. Anyway, Puckett made ten All Star appearances in his twelve years in the MLB, averaged 192 hits a season, and batted .318 lifetime. His Hall of Fame moment came in the 1991 World Series, when he hit a walk-off home run in Game Six to extend the series to a seventh game that the Twins would eventually win. 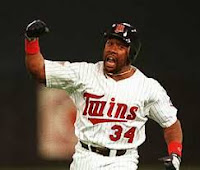 #49: Jeff Bagwell
Bagwell's 449 career home runs and 1,529 RBIs in just 15 MLB seasons should've punched his ticket into Cooperstown on the first ballot, but his election was delayed due to steroid speculators. Nonetheless, the 1994 NL MVP for the Astros batted .297 lifetime and had an on-base percentage above .400 in seven seasons.

#48: Craig Biggio
He's the second Astros HoFer on this list and the first member of the 3,000 hit club on this list. Biggio's 3,060 career knocks rank number one in the Astros organization and 24th on the all-time list. The seven-time All Star second baseman led the league in runs scored twice and doubles three times.

#47: Lou Brock
Larcenous Lou stole 938 bases during his career, which at the time of his retirement, was the best mark in history (and now stands second only to someone who will appear in the next blog post). But something you probably didn't know about Mr. Brock is that he is also a member of the 3,000 hits club with 3,023 career base hits. He posted 190+ hits in a season seven times throughout his career with the Cardinals and Cubs from 1961-1979 and even made six All Star Games.

Next post will include #45-41, so get excited as we move along into the dog days of summer! Thanks for reading this post and I hope you enjoyed it. Check back soon for more of "all the buzz on what wuzz."
Posted by Matt Nadel at 9:07 AM 1 comment: