I've been wanting to interview Yogi Berra, so I recently reached out to the Yogi Berra Museum & Learning Center and the really nice director there, Dave Kaplan (who is also the author of some Yogi Berra books), agreed to coordinate an interview between Yogi and I via email.  The Museum is in Montclair, New Jersey on the Montclair State University campus, pretty close to my house. It was started on December 4, 1998 and has a mission focused on educating young people (just like my blog).

Before I get to the interview, let me tell you a little bit about the great Hall of Fame catcher:
Born Lawrence Peter Berra in St. Louis in 1925, Yogi played for the New York Yankees from 1947-1963 (he didn't play in 1964) and then played for the Mets in 1965. In his time behind and at the plate, he hit .285 lifetime,  with 358 homers, and 1,430 RBIs. Aside from being a great hitter, he was a great catcher too. One of his many amazing accomplishments during his career was that he has the most World Series rings of any player in baseball history with ten!! Another great accomplishment was that he won three MVP awards in his career, tied for the most in American League history. Yogi was also famous for his Yogi-isms. Some of his famous ones are, "It ain't over till it's over" and "If there's a fork in the road, take it." My personal favorite is, "If you don't go to your friends' funerals, they won't go to yours." Yogi managed the 1973 Mets, the worst team to make it to the World Series with an 82-79 record. (They lost to Oakland in seven games.) He also managed the Yanks.  Fun fact about Yogi: Remember when Bill Mazeroski hit that walk-off, World Series-winning homer in 1960 for the Pirates? He had the best view of it going out because he was playing left field when Bill hit it. Anyway, before I give away too much about the Hall of Fame catcher, here's the interview:

Matt: Of the ten World Series rings you own (see picture), what's the most you've ever worn at the same time?
Yogi: For a magazine photo, once I put on all 10. But I only wear one.

Matt: You are famous for your Yogi-isms. Of the ones you actually said, what's your favorite?
Yogi: I don’t know. Maybe "it ain’t over til it’s over".

Matt: You and Phil Rizzuto worked as suit salesmen in the off season. Who was the better salesman?
Yogi: Phil was a better talker.

Matt: Do you drink the Yoo-hoo chocolate drink?
Yogi: Not any more. They changed the formula.  [Note from Matt: Yogi made commercials for Yoo-hoo and was an owner of the company.  According to Yogi's autobiography, "One time I was in the [Yoo-hoo] office and the phone rang. I always answer a ringing phone. The woman on the other end asked if Yoo-hoo was hyphenated. I said, 'No ma'am, it's not even carbonated.' "]

Matt: What player of all time would you have liked to have seen on the Yankees?
Yogi: I don’t know, we had some pretty good players ourselves.

Matt: How did it feel to manage the Mets in the 1973 World Series?
Yogi: It felt good – nobody gave us a chance that year.

Matt: What do you think major league baseball should be doing to increase awareness of baseball history in the younger fan base?
Yogi: That I don’t know - you can’t make anybody do anything, if they don’t want to.

Matt: What are the biggest changes to the game today versus when you played?
Yogi: Oh boy. Well, mostly the money. Also, the number of teams, the length of the games and the stadiums are smaller. And the specialization of pitchers today – we had guys who could both start and relieve.

Matt: Do you think anyone today could break Joe DiMaggio's streak?
Yogi: Probably not.

Matt: Given what a fun-loving guy Nick Swisher is, do you think he would have fit in well with you, Whitey Ford, Mickey Mantle and Billy Martin when you guys went out after games?
Yogi: Sure, as long as he produced when he played.

Matt: When Derek Jeter goes into the Hall of Fame, do you think he will be the first unanimous election?
Yogi: I don’t really know, you have to ask the writers.

Matt: Did you get to keep any mementos from the old Yankee Stadium?
Yogi: The Yankees gave us the last home plate. It’s in our Museum.

Matt: Which Series win is the most memorable to you?
Yogi: They were all memorable. Maybe the ’56 one – that was (Don) Larsen’s perfect game. I hit two home runs in Game 7 in that one, too.

And if you still want more Q&A, check out this link to the Ask Yogi part of the Museum's web site.

Thanks again so much to the great Hall of Famer Yogi Berra for doing the interview!!!
And if there any other baseball players out there who are reading or hearing about my blog and want to be interviewed (by phone or email), please contact me at mattamdad@gmail.com.
Finally, Baseball with Matt is now on Twitter.  So if you want to follow my blog and do some tweeting, just go to @BaseballwMatt. 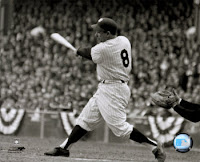 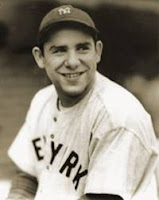 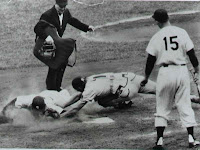