There are four people who will be officially elected into the Baseball Hall of Fame on July 27th, 2014 who once were part of the Atlanta Braves franchise. Their names are Bobby Cox, Joe Torre (yes, he was a player and a manager for them), Greg Maddux, and Tom Glavine. But today, I just want to focus on Glavine.

Thomas Michael Glavine played for the Braves and Mets from 1987-2008. In his 22 years of outstanding pitching, the ten-time All Star won 305 games with an ERA of 3.54. He led the league in wins five times, three of those times being consecutive, and won the NL Cy Young Award in 1991 and 1998. 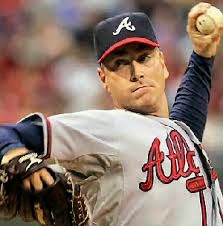 He helped the Braves win 11 straight division titles and also helped his teams in the postseason, going 14-16 with a low 3.30 ERA during the playoffs. Perhaps his best playoff series performance was in the '95 World Series, when his Braves took on the Indians. Glavine won two games and only gave up a little more than one run every nine innings. The Braves would end up winning that World Series, giving Tom his only ring.

Glavine, Maddux, and fellow pitcher John Smoltz were part of an elite starting rotation for Atlanta during the 1990s that was one of the best of all time, but that rotation wouldn't have had the same success without the always calm Tom Glavine. Anyway, thanks for reading this post. I hope you enjoyed it and check back soon for more of "all the buzz on what wuzz."