I watched a video on Vox's Youtube channel about the major American sports and how luck-oriented or skill-oriented they are. The video was based on a book called "The Success Equation" by Michael J. Mauboussin and in it, he explains why mathematically each sport lies where it does on a luck-versus-skill linear graph that he himself constructed. There's a lot of very interesting math involved, but let me just say this: all five sports on the graph (baseball, football, basketball, hockey, and soccer) all vary in terms of which concept, skill or luck, is a bigger factor, but baseball is the sport that's right smack in the middle of the other sports. Why is that? Without getting numbers-crazy, here's my explanation.

I think the bottom line is that baseball is really a game of inches, like football (which would explain why it too is located relatively in the center on the luck-skills graph amongst its fellow sports). It takes extreme precision and reaction time to hit a baseball; hitting a ball just millimeters away from the optimal area can turn a home run into a popup and a standard-speed fastball travels from the pitcher's hand to the catcher's mitt in about the time it takes for your eyes to blink. Developing the skills to even just make contact with a baseball requires a lot of effort and the same thing goes for pitching. If a pitch is even just a little bit off from the pitcher's desired location, then he heightens his risk of giving up a hit. Whether one is on the mound, in the batter's box, or even on the field, the main disciplines of baseball take time to master, which is why it's very rare to see an MLB draftee make his MLB debut soon after being drafted.

However, while the internal factors of a given play are more skill-oriented in baseball, the external factors are more luck-based. What if a good hitter faces an even better pitcher? What if that pitcher misses his spots and the hitter is blessed with a base hit? What if a key player on a team's roster gets injured right before facing a worse team? What if a fielder randomly makes an error that grants the other team an advantage? There are way too many variables that go into every moment of a baseball game to determine that the better team will always win, which is what makes the game so exciting.

One of the most interesting points made in the book by Mauboussin is how the rules of each game play a heavy role in a sport's placement on the luck-skill graph. Baseball is like hockey, in that the best hitters have the ability to impact a game just as much as the worst ones in a lineup, because a batting order is rotational. But baseball is like basketball in that a single player (in this case, a pitcher) has the time and position to completely take over a game. There's a sense of randomness that goes along with each baseball game, but it's still fair to say that a team of players with better stats is already favored to win a game over a team with inferior players.

Probably my biggest takeaway from the video is the fact that baseball's playoffs are the most random out of any sport, meaning that the winner of the World Series is not guaranteed to be the best team in baseball, not even in the slightest. Some people might view this as detrimental to better teams that deserve a championship, but I believe that because of baseball's balance of skill and luck, this randomness adds an entirely new factor to the graph: being clutch. In baseball, it's not the best teams that win, but rather the teams that want it the most and actually show up when games matter most. That's why I love baseball so much; it has the innate ability to turn nobodies into somebodies as quickly as it turns favored teams in April to September into losing teams in October.

Thanks for reading this post and I hope you enjoyed it. Check back soon for more of "all the buzz on what wuzz."
Posted by Matt Nadel at 3:58 PM No comments:

Today, the Modern Era Committee's electees for the 2018 MLB Hall of Fame class were announced and, boy, was I thrilled with the results. Here's why!

Quick background: players on the ballot for the 16-person committee to vote on had to have their major career accomplishments come between the years 1970-1987. The nine players (and one executive) on the ballot were Steve Garvey, Don Mattingly, Jack Morris, Alan Trammell, Luis Tiant, Dale Murphy, Ted Simmons, Dave Parker, Tommy John, and Marvin Miller.

The No-Doubter: Alan Trammell
I FINALLY HAVE A HALL OF FAME BIRTHDAY BUDDY AND I COULDN'T BE HAPPIER! Trammell played shortstop from 1977-1996 exclusively with the Tigers and built the reputation of being one of the best-fielding shortstops in baseball history. The 1984 World Series MVP was called "the model of consistency" by famous sportswriter Peter Gammons, having collected at least 25 home runs, 100 RBIs, 150 or more hits, or a batting average of .300 or higher in separate seasons all across his career. Here's a link to my live interview with Trammell from the 2015 Hall of Fame Classic (pic below, too). 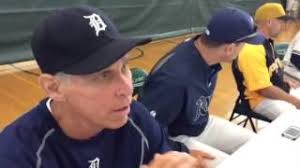 Finally gets the credit he deserves: Jack Morris
The winningest pitcher of the 80s who started 14 Opening Days during his career is the second and final member of the 2018 Hall of Fame class so far. Morris pitched from 1977-1994 with the Tigers, Twins, and Blue Jays, winning 254 career games and posting 15 or more wins in twelve seasons. The five-time All Star is most known for his Game Seven performance during the 1991 World Series while playing for the Twins against the Braves, when he pitched a 10-inning shutout en route to a championship for the Gopher State.

The one I though should've gotten in: Steve Garvey
The National League version of Lou Gehrig (in terms of consecutive games played) was a ten-time All Star playing with the Dodgers and Padres from 1969-1987. Garvey collected 200+ base hits in six out of seven seasons from 1974-1980, twice leading the NL in the category. The .294 lifetime batter brought some great baseball memories to Southern California, which is why I was surprised to not hear his name called out with Trammell's and Morris's.

Overrated: Don Mattingly and Dale Murphy
Let me just say that as a Yankees fan, I love Don Mattingly. However, just like Murphy, he had a solid start to his careers that fizzled out by the end. If both of them were more productive over longer periods of time, then they're Hall of Famers.

Last but not least...
Put Gil Hodges in the Hall, already!

Thanks for reading this post and I hope you enjoyed it. Congratulations to Jack Morris and Alan Trammell on their election into the Hall of Fame and check back soon for more of "all the buzz on what wuzz." 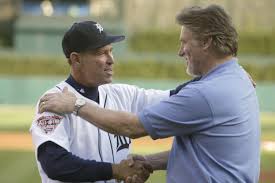 The 2017 MLB offseason is still in its infant stages, but that doesn't mean we won't see any blockbuster trades any time soon (i.e., Giancarlo Stanton). In honor of this excitement, let's take a look at one of the biggest trades in recent MLB history: Yoenis Céspedes to the New York Mets from the Detroit Tigers.

Trade: Yoenis Céspedes of the Tigers for Luis Cessa and Michael Fulmer of the Mets
When? July 31, 2015
What Happened? The Mets were in the thick of a division race with the Nationals in the middle of the 2015 summer and were looking for a big bat to give them a decent advantage over the team from DC. Meanwhile, Detroit was having a down season and, seeing as Céspedes would be a free agent at the end of the year, decided to trade him to Flushing for minor leaguers Fulmer and Cessa, two promising young pitchers.
Immediate Impact: Céspedes was so good for the Amazins in the final two months of the season that he was in the NL MVP conversation! His 17 home runs and .287 batting average in only 57 games were arguably the biggest reason out of many that the Mets won the 2015 NL East crown with 90 wins. Even though he wasn't a huge factor for the Mets in the playoffs, they still appeared in their first World Series in 15 years, but wouldn't have had the chance to do so if Céspedes wasn't traded to them. Fulmer and Cessa did not make their major league debuts until 2016.
What Happened Next: Céspedes has re-signed with the Mets on multiple occasions and will stay with the club until 2020 at the minimum. Since his amazing start in New York, Céspedes made the NL All Star team in 2016, but missed half of 2017 due to injury. However, his batting average for 2017 was a very respectable .292. Fulmer is probably one of the only bright spots on a sad Detroit Tigers team that just finished with the worst record in baseball. However, Fulmer did win the 2016 AL Rookie of the Year and made the AL All Star team's pitching staff in 2017. Cessa was traded to the Yankees following the 2015 season and hasn't done much in the Bronx.
Who Won the Trade? Even though both Céspedes and Fulmer are All Stars on current subpar teams, Céspedes gave the Mets a real chance at a championship back in '15, so I'm giving this win to the boys in blue and orange.

Thanks for reading it this post and I hope you enjoyed it. Do you agree that the Mets came up on top in this trade? Leave your thoughts in the comment section below. Check back soon for more of "all the buzz on what wuzz."
Posted by Matt Nadel at 1:10 PM 50 comments: