Colin Cowherd recently had a list of his least favorite uniforms of all time, but the list included some baseball uniforms that most definitely did not belong on that type of list. With that, here are five of my favorite uniforms of the past that are objectively pretty ugly, but also the best.

Number One: The Padres' Mustard Yellows
A lot of people say that this uniform is one of the grossest in baseball history, but it's a very nice reminder for Padres fans, as they actually made it to their first World Series in franchise history in 1984 while wearing these condiment-themed uniforms. Couple the mustard yellow with the brown and orange and you have yourself one of the most "throwback-iest" throwbacks in baseball history.

Number Two: The Astros' Rainbow Look
I actually have zero problem with these 1975-1986 jerseys. I think they're very unique and were a major statement during a time when fashion itself was changing across the United States. When the current Astros wear the rainbows, I always smile a little.

Number Three: The Shorts Experiment
The White Sox wore shorts and collared shirts during games in the middle of August in 1976, thanks to the genius mind of their always-creative owner, Bill Veeck. However, after the ChiSox realized they weren't playing soccer, they switched back to the standard pants look. 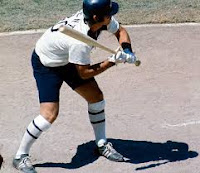 Number Four: The Ray's "Faux-backs"
Ok, so this isn't really a retro uniform, but it's still amazing. Because the Rays didn't debut until 1998, they never wore one of those funky uniforms of the latter half of the 20th century. This inspired the Rays to create fake throwbacks, an amazing marketing idea for a team that lacks in attendance.

Number Five: The Brewers' Powder Blues
This should just be their regular uniforms. Coupled with the glove logo, which conveniently is made up of an "M" and a "B," this uniform is one of the classiest of the famed powder blue uniforms of about 40-50 years ago. Please, Milwaukee, bring back this awesome look as the default uniform. 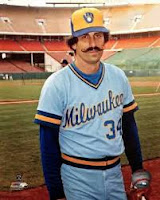 Which retro uniform do you think is the best? Let me know in the comments down below. Thanks for reading this post and I hope you enjoyed it. Check back soon for more of "all the buzz on what wuzz."
Posted by Matt Nadel at 12:31 PM No comments:

I recently read an article discussing Mike Trout's hot start and whenever any article brings up this topic, the "Trout versus Babe Ruth" comparison is always insinuated. Now, as some of you might remember, I called Ruth the best hitter of all time in my "Top 50 Hall of Fame Hitters" series I did over the summer. So of course, I have to defend the Bambino and will be doing so in this post.

The main point of comparison between these two amazing hitters is always wins above replacement, a controversial, yet definitely important statistic to value a player's skills in proportion to his overall team's play. For example, Mike Trout's WAR as of Monday, according to FanGraphs, was 1.2, meaning that because Trout is in the lineup, the Angels had won 1.2 games more games than they would've if he wasn't in the lineup. Trout is famous for having insane WAR seasons, but there's something that is worth bringing up about this new-age stat: wins above replacement is a good indicator of who is deserving of the MVP award, but doesn't always designate who is the best at hitting.

Call my opinions out-dated, but hear me out. Baseball Hall of Fame legitimacy relies on three core statistical percentages, among other stats, which are batting average, slugging percentage, and on-base percentage. These numbers are incredibly important, specifically in that order. My explanation for this ranking is as follows. If I, Matt Nadel, a 5-foot-6, 135lb 20-year-old, were to have 100 Major League plate appearances and was not allowed to swing at all, I would still probably have a fine OBP. Of course patience is important when it comes to batting, but comparably, slugging percentage and batting average are much more important in determining a hitter's skill. These two stats are where Ruth really stands out compared to Trout. Babe Ruth is the all-time leader in career slugging percentage at .690. Mike Trout's slugging percentage at the moment is a "measly" .576. It's really not a bad slugging percentage, but this comparison really just means that no one, and I mean no one, could hit the ball as hard or as far as Babe Ruth. Sure, he was hitting at Yankee Stadium, where right field is notoriously short, but that's where batting average comes into play.

Babe Ruth batted .342 for his career. Hank Aaron batted .305. Barry Bonds batted .298. Mike Trout's career batting average is currently .307. I am well-aware that baseball was quite different back when Ruth played, but you do not win the MVP award if you have a bad batting average. Seriously, look at the MVP winners of the past. Almost every single MVP has a good batting average or has a better batting average than their lifetime one. This may be an extreme coincidence, but especially during a time when batting averages are down across baseball, batting average has been, is, and will always be king. Aaron, Bonds, and Trout can almost go toe-to-toe with Ruth on OBP and slugging, but it's the batting average that makes Ruth stand out.

Oh, and did I mention that Babe Ruth is the all-time WAR leader at 182.4? Yeah, stop with the "Trout vs. Ruth" comparison. Of course Trout's the best hitter in baseball at the moment, but your arguments have been moot for almost 100 years, because without Ruth's revolutionary hitting, there would be no Mike Trout. Thanks for reading this post and I hope you enjoyed it. Check back soon for more of "all the buzz on what wuzz."
Posted by Matt Nadel at 6:41 PM No comments:

I've been very into these "The Case For" blogposts recently, so I'm pumping out another one! Nick Markakis has always been a prolific hitter and is set on a path that's headed straight for Cooperstown, despite only making his first All Star Game last year. Why is he so worthy of the Hall of Fame, you ask? Let me answer that question with some classic Baseball with Matt Hall of Fame precedence.

All Star Games do and don't matter for Hall of Fame consideration. Joe DiMaggio made an All Star Game every single year he played in the MLB, which, due to him only playing for 13 years, arguably pushed him over the edge for Hall of Fame consideration. Jim Thome, on the other hand, only made five All Star Games in 22 years, but is in the Hall of Fame for his 612 career home runs. Markakis definitely falls more under the Thome category rather than DiMaggio's at this current moment for being a player who excels at hitting without the deserving midsummer recognition.

But is Markakis's consistent hitting really comparable to Jim Thome's power? Realistically, probably not, considering 612 home runs is, to put it plainly, insane. However, Markakis's stats are nothing to insult. In just 13 years (excluding 2019), Markakis has 2,237 hits and a .288 batting average. Those averages equal to 172 hits per season, which puts him on track for 3,000 hits towards the middle of his 17th season. As long as he can keep up that pace to reach 3,000, he will be a Hall of Famer. I'm aware that you're tired of hearing this from me, but remember: 3,000 hits is an automatic ticket to Cooperstown.

But here's where things get interesting. Will Markakis's lifetime batting average affect his ability to get into the Hall on his first try? The best comparison for this question would have to be Craig Biggio, who totaled 3,060 career hits (and only seven All Star Games in 20 years), but it took him three years on the BBWAA ballots to get in. Biggio's delayed induction could've been due to steroid skeptics, but it was most likely due to his .281 batting average, the third-lowest batting average out of the members of the 3,000 hit club. However, the hitters who are number one and two, Cal Ripken Jr. and Rickey Henderson, both had other reasons for their Hall of Fame legitimacy and both received voting percentages of over 90% on their first time on the ballot.

Whether it takes one year or ten, Nick Markakis is a Hall of Famer if he reaches 3,000 hits. If he gets more All Star Game appearances under his belt and raises his batting average before he retires, though, the 3,000 hits might not be as necessary for him to see his plaque in Cooperstown. Thanks for reading this post and I hope you enjoyed it. Check back soon for more of "all the buzz on what wuzz."
Posted by Matt Nadel at 5:25 PM No comments: