On Saturday, I had the honor of talking with New York Mets' 1986 World Series hero, Mookie Wilson, at a book store in Maplewood, New Jersey called Words (click here to go to the website for the store)! I only had the chance to ask him a few questions, because he was signing his book, Mookie: Life, Baseball, and the '86 Mets, and there was a very big line, but it was still an exciting live interview that I wanted to share with you. But before I get to the interview, let me tell you a bit about Mookie. 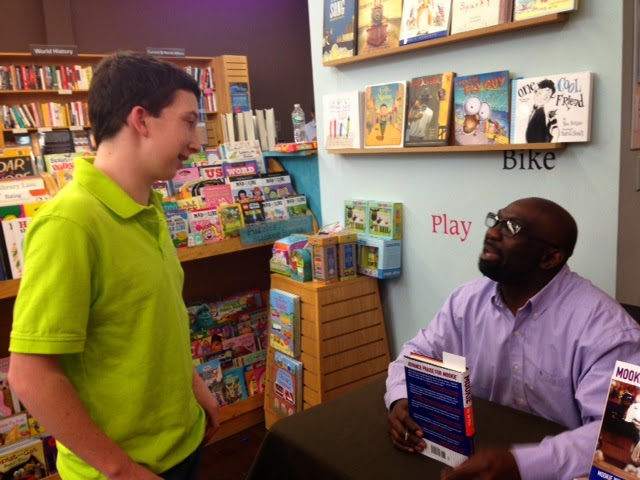 William Hayward "Mookie" Wilson played from 1980-1991 with the Mets and Blue Jays. A .274 lifetime hitter, Wilson collected 1,397 career base hits. He is a member of the Mets Hall of Fame and is one of the nicest baseball players I have ever met. He hit 3 homers in the strike-shortened 1981 season, two of them having won the game for the Mets. Why is this impressive? 66% of his home runs won Mets games during the 1981 season. Babe Ruth would have had to hit 40 game-winning homers for the Yankees in his 1927 season in order to match that feat. However, undoubtedly Mookie's greatest MLB moment was when he came up in the bottom of the tenth inning of Game Six of the 1986 World Series at Shea Stadium in New York with the Mets down by one. After a wild pitch tied the game, Mookie hit a slow grounder to Red Sox first baseman Bill Buckner...and Buckner didn't field it! Ray Knight scored from second, Wilson was safe at first, and the Mets tied the Series at three games apiece. The Mets would go on to win the Fall Classic, all thanks to Mookie Wilson. [Note from Matt: This famous World Series play is actually discussed in my upcoming book, Amazing Aaron to Zero Zippers: An Introduction to Baseball History, and my book was written about in the New York Post yesterday!!]

And now, the moment you've all been waiting for, an interview with Mookie Wilson!

Matt: How'd you get the nickname Mookie?
Mookie: I have no idea.

Matt: Are you good friends with Bill Buckner?
Mookie: Yeah. Really good friends. I actually spoke to him yesterday over the phone.

Matt: How many times have you watched Game Six of the '86 Series?
Mookie: I think only once.

Matt: How many times have you watched the replay of Buckner's error (click here to see the famous error)?
Mookie: Probably over 200 times. 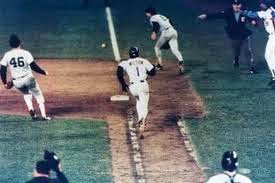 Well, I know it was a pretty short interview, but it was definitely worth it to wait in a long line to get to speak to him. Thanks again to Mookie for not only answering my questions, but for also signing his book for me (see pic below). Anyway, thanks for reading this post. I hope you enjoyed it and check back in a few days for more of "all the buzz on what wuzz."