The MLB offseason has already been packed with excitement, as teams are already signing players to gigantic contracts. The question is, however, will the contracts be worth it? In this mini-series on Baseball with Matt, I will be examining the careers of current baseball players after they signed huge contracts to see whether the team that signed them has gotten enough back in return. For this post, let's check out the career of one of the most underrated hitters in baseball: Adrian Beltre.

Before the Big Bucks:
Adrian Beltre has been playing in the MLB for an extremely long time, since 1998 to be exact, and his first couple of years weren't filled with excitement. In the first six years of his career, which were played with the Dodgers, the third baseman never hit more than 23 homers in a season. But in 2004, he exploded, leading the league with 48 dingers with a .334 batting average and 121 RBIs. He placed second in the MVP voting and won his first career Silver Slugger that year. In the next six years of his career, he continued to post solid stats, averaging about 22 homers a season. He also collected his first two career Gold Gloves and made his first All Star Game in 2010. But after the 2010 campaign, which he played with the Red Sox, he was granted free agency. On January 6, 2011, Beltre signed a monster 6-year, $96 million deal with the Texas Rangers.

After the Signing:
I think it's safe to say that although $96 million is a lot of money, this deal was definitely worth it for the Rangers. In my opinion, even though he is not always recognized for it, Adrian Beltre has become one of the best third basemen in baseball. From 2011-2016, he's batted a solid .308, averaging 28 home runs and 94 RBIs a season. He's made three more All Star Games (2011, 2012, and 2014) and was even the starting third baseman for the AL for the '11 and '12 ASG. But perhaps the biggest reason why this deal was worth it for the Rangers was Beltre's insane fielding ability. He's won the Gold Glove at third base for the AL in four of the last six years. Oh, and did I mention that Beltre's unbelievable leadership and play has led the Rangers to four playoff births since 2011, including a trip to the 2011 World Series?

The bottom line is that if Beltre continues his dominance for another few years, he will absolutely be a Hall of Famer, despite the fact that he tries to make contact with the wildest of pitches. His time with the Rangers has made him the legend that he is. Thanks for reading this post and I hope you enjoyed it. Check back soon for more of "all the buzz on what wuzz."
Posted by Matt Nadel at 4:08 PM No comments:

The MLB offseason has already been packed with excitement, as teams are already signing players to gigantic contracts. The question is, however, will the contracts be worth it? In this mini-series on Baseball with Matt, I will be examining the careers of current baseball players after they signed huge contracts to see whether the team that signed them has gotten enough back in return. The first player I analyzed was Albert Pujols, but now let's travel to the mound to look at the career of Max Scherzer before and after he signed for big bucks to play in our nation's capital.

Before the Big Bucks:
Max Scherzer started his career with the Diamondbacks in 2008 and was traded to the Tigers following the 2009 season. The pitcher with different-colored eyes was just an alright pitcher for the first five years of his career. His best year in that timespan was 2012, when he went 16-7 with a 3.74 ERA. There were flashes of greatness, but he wasn't an All Star pitcher until 2013. That year with Detroit, he went 21-3 (those 21 wins led the league) with an ERA of 2.90, led the league with a 0.970 WHIP, was the AL starting pitcher at the All Star Game, and won the Cy Young Award. The next year, he again led the league in wins with 17 and again made the All Star Game. But following the 2014 season, he was granted free agency and signed a 7 year, $210 million contract with the Washington Nationals.

After Signing:
Boy, was this a great move for D.C. Sure, it's a lot of money, but it's been extremely worth it considering Scherzer is still one of the best pitchers in baseball. His record wasn't so hot in 2015, going just 14-12, but his ERA was his best of his career at 2.79. He made the NL All Star team, led the league in complete games and shutouts, and placed fifth in Cy Young Award voting. In 2016, he won a league-leading 20 games with a 2.96 ERA, led the league in strikeouts (284) and WHIP (0.968), made the All Star Game, and won his second career Cy Young Award. On top of that, he led a talented Nationals team to an NL East title. Seriously, this guy has been an insane pitcher in the National League. Speaking of pitching in the NL, Scherzer also had 12 RBIs in 2016. Wow!!

Max Scherzer is one of the most important reasons why the Nationals are a force to be reckoned with in the National League every single year. So, in conclusion, this deal has definitely been worth it so far for the Nats. Who knows what Scherzer will turn into in the last five years of his contract, but he doesn't seem to be slowing down any time soon. Thanks for reading this post and I hope you enjoyed it. Check back soon for more of "all the buzz on what wuzz."

The Winter Meetings are here and teams are already signing players to gigantic contracts. The question is, however, will the contracts be worth it? In this new mini-series on Baseball with Matt, I will be examining the careers of current baseball players after they signed huge contracts and seeing if the team that signed them has gotten enough back in return. The first player I am analyzing will be Albert Pujols.

Before the Big Bucks:
From 2001-2011, Albert Pujols was perhaps the best player in baseball. A first baseman for the Cardinals, Prince Albert batted .328 with an average of 40 home runs and 121 RBIs per season during those years. He made nine All Star Games and won the NL MVP three times. He also helped the Cardinals win the 2006 and 2011 World Series. But after the 2011 season, Pujols was granted free agency and signed a ten-year, $240 million contract with the Los Angeles Angels. What a big contract, right? Well, at the time, Pujols was one of the best of the best in the MLB and the Angels needed some help in the lineup. Since then, however, things have not been the same for the slugging future Hall of Famer.

After Signing:
After playing with the Angels for five seasons, in my opinion, it's safe to say that this deal was not worth it for LA and here's why. Sure, Albert has averaged 29 home runs a season in Southern California, but other than that, his numbers have been significantly worse. His batting average per season with the Angels is a mediocre .266, 62 points lower than when playing by the Arch. His difference in slugging percentage is even worse: .474 compared to .617. And don't even get me started on his WAR: 7.8 per season in St. Louis and only 2.9 in LA. On top of all this, since 2012, the Angels have only made one playoff appearance, a 2014 AL West Division title, and in that appearance, they were swept in the first round. I don't think this sudden decline was really expected by the MLB community, but it's clear now why Pujols's stats have worsened since the 2011 season and it's not his fault: age. His body is starting to slow down, but it started slowing down at a rate that the Angels probably never saw coming. So, in conclusion, although Pujols has still put up solid numbers, they aren't what we have long considered to be "Albert Pujols numbers," so the deal was not worth it.

An Alternative:
The Angels aren't exactly known for their pitching. In 2016, LA's pitching staff had an ERA of 4.28, good for 21st in baseball. Their hitting wasn't too good last year either, but it's on the pitcher's mound where there is a real concern. They also only saved 29 games last year, which was 28th in the MLB last year. Imagine if instead of signing Pujols in 2011, they traded for a guy like Yoenis Cespedes and then signed him on a much cheaper and shorter deal and in this past offseason signed someone like Kenley Jansen to improve the bullpen.

I'm not saying that I hate Albert Pujols. In fact, he's one of my favorite players right now and I'm always rooting for him to put up great stats. But the bottom line is that he's not the same first baseman from ten years ago. The Angels' franchise would be in a much better place right now if they hadn't spent that much money on him. Thanks for reading this post and I hope you enjoyed it. Check back soon for more of "all the buzz on what wuzz."
Posted by Matt Nadel at 7:22 PM No comments:

One of the things I love about baseball is how international it is, specifically how many Latin American players get the chance to play in the MLB. However, do you know what the last names of some familiar Spanish-speaking baseball players mean? That's what this post is for. 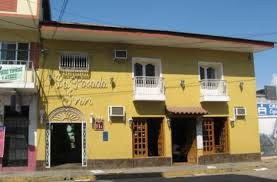 Some of these meanings are extremely allegorical. Roberto Clemente was known for his charitable nature and Vlad Guerrero fought off every pitch thrown at him. Others make absolutely no sense. I don't think that Matt Garza would compare himself to a heron. And some are very funny. I would totally stay at a hotel called "Jorge's Posada." Any way, did you know any of the meanings to these last names? Leave more Hispanic baseball surnames in the comments section below with their translations. Thanks for reading this post and I hope you enjoyed it. Check back soon for more of "all the buzz on what wuzz."
Posted by Matt Nadel at 8:49 AM No comments: