Matt Nadel here of Baseball with Matt with some more on the history of America’s Pastime. Now I know that at least some of you have heard of the great quarterback in the NFL, Warren Moon. However, have you ever heard of Wally Moon (no relation)? At first, I had never heard of the guy, but I looked up his stats and although he had a short career, he was a heck of a hitter.

Wallace Wade Moon played from 1954-1965 with the Cardinals and Dodgers. In his twelve-year career, he hit 142 homers, drove in 661 runs, and batted .289 lifetime. The Rookie of the Year winner in 1954 also went to three All Star Games and considering that the NL outfield for the All Star Games of that time were dominated by Hank Aaron, Willie Mays, Roberto Clemente, Willie McCovey, and Frank Robinson, I’d say that three All Star Game appearances is very good for Moon. Anyway, the teams he played for won two World Series, the Dodgers in 1959 and 1965 (the Dodgers also won in 1963, but Wally wasn't in the lineup for that Fall Classic). In those series, Wally went 6-27 with a homer and two RBI. Fun fact about Moon: he invented the term “moonshot”, when his titanic homers were called that by announcers and newspapers. 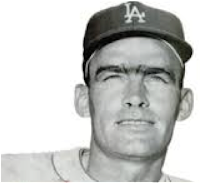 Well, even though he didn’t have that long of a career and doesn’t look to be going into the Hall any time soon, Wally was a great ballplayer at a time of great NL outfielders. Anyway, thanks for reading this post. (Note that I originally posted this for Big Leagues Magazine, a really great online magazine that I write for. Hope you check it out.) I want to give a special shout-out to my dad's friend, Howard Altman, a very famous accountant, for telling me all about Wally. I hope you enjoyed it and check back next time for more of “all the buzz on what wuzz.”

P.S. - In case you missed it, I appeared last night at 8:30PM on SportsRantz Radio on the show Hump Day with That Sports Chick. I was on for about a half hour and the hosts Robyn Vandenberg and Tom Murphy were really nice. If you want to hear it, just click here (I come on at about 31:25 into it).