I'm sure you've all heard about the movie "42" that recently came out in theaters. Well, I decided to do a movie review of it!

The movie "42: The True Story of an American Legend" is the story of how Jackie Robinson broke the color barrier and joined the major leagues, the first black man to do so. (To learn more about Jackie Robinson, just click here.) The stars of the movie were Jackie Robinson (played by Chadwick Boseman), and Branch Rickey, the owner of the Dodgers at the time (played by Harrison Ford). In the movie, Jackie overcomes adversity when he becomes the first African-American ballplayer in the MLB after he gets signed by Rickey. He is brought up to The Show in 1947 and a lot of people don't really like him because of the color of his skin, including Phillies manager Ben Chapman, who was very mean to Jackie. However, as the movie continues, the hate starts to turn into respect as people like Chapman and other players realize that Jackie is as good, if not better at baseball than them. In the movie and in real life, Jackie marries his college sweetheart, Rachel, the Dodgers win the National League pennant, and Robinson wins the first ever Rookie of the Year Award. 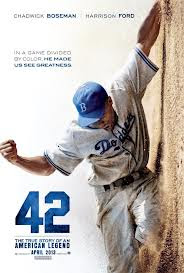 The movie provided some amazing special effects, as ballparks such as the Polo Grounds (Giants) Ebbets Field (Dodgers) and Forbes Field (Pirates) all looked so realistic. Also, every time a ball came out of the pitcher's hand, the camera view was as if the audience was the catcher, so I was bracing myself from getting hit with the ball. The movie wasn't even in 3D and I was scared out of my pants from getting beaned!

All in all, it was a great movie and if you haven't seen it, you really should. Well, I hope you enjoyed this movie review. Thanks for reading it and check back in a couple of days for more of "all the buzz on what wuzz."