I have another interview for you! It is with Mets General Manager Sandy Alderson! I actually got to interview him live at his office in Citi Field and the video of the interview is on YouTube! So, please click here to see me interview Sandy. 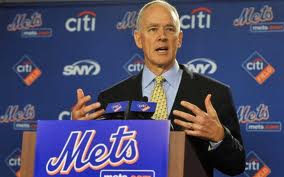 However, I'm not sure that you all know about Sandy's history, so read the following paragraph in order to learn a few things about the mentor to Billy Beane.

Sandy was the son of an Air Force pilot who flew planes during World War II, the Korean War and the Vietnam War. Sandy himself joined the Marines and also served in Vietnam, like his father. He went on to Dartmouth College and then Harvard Law School. After law school, he worked for a law firm in San Francisco, California. Roy Eisenhardt, one of his bosses, left to become president of the Oakland Athletics and in 1983 Sandy joined him to become the team's general manager until 1997. Sandy almost completely revamped the A's minor league system, which produced back-to-back-to-back Rookies of the Year in Jose Canseco (1986) (who was in the system before Sandy joined the team), and Mark McGwire (1987) and Walt Weiss (1988). The Athletics won three pennants and the 1989 World Series during Alderson's tenure, a four game sweep of the Giants. In 1995, because of cost cutting, Alderson began using sabermetric principles, which was basically using all sorts of mathematical calculations to find undervalued players to make a winning team. He also helped introduce Billy Beane (who is written about in the book "Moneyball") to these ideas. Alderson left the A's to work for the MLB Commissioner’s office, where he served as Executive Vice President for Baseball Operations from 1998-2005. Sandy then became CEO of the San Diego Padres from 2005-2009, leading the team to back-to-back division titles in '05 and '06. Finally, Alderson was hired by the New York Mets before 2011 to replace Omar Minaya as their general manager .

Well, that's all you need to know about Sandy Alderson. Make sure you watch the interview. It's really good and I thank you for watching it and hope you enjoy it. I also want to give a big shout-out to Sandy Alderson for being such a great sport in doing the interview, plus I want to thank June Napoli, Sandy's assistant, for helping to arrange it, and also Seward & Kissel litigation partner Dale Christensen, Sandy's college buddy, for introducing me to Sandy.

And as always, please check back in a couple of days for more of "all the buzz on what wuzz."
Posted by Matt Nadel at 6:43 PM