It was pouring rain when I got to the Hall on Friday with my dad. We went out to dinner with the Director of Education for the HoF, Jamilyn Cole, and her friend, Tony (a really good guy). She was telling me about what was going to happen on Saturday and how I would be able to interview the former players and managers.

The next day, my dad and I went to the Clark Center to get our press credentials, but it was still rain very hard. After that, we went directly to the Hall to hear an interview at 10AM with the two managers, Bobby Cox and Cito Gaston. They both had some very cool stories. At about eleven, I went back to the Clark Center for the interviews and also I heard that the Hall of Fame Classic baseball game was cancelled. Nonetheless, about a half an hour later, I got to interview some former players, including Hall of Famers Rickey Henderson, Rollie Fingers, Goose Gossage, and Phil Niekro! I also interviewed HoF President Jeff Idelson (a really nice guy who I've interviewed in the past), plus Will Clark, Jim Leyritz and Dennis Rasmussen.

The HoF asked me to be a junior reporter, so I had a microphone and all of my interviews were filmed by Roger Lansing, the Manager of Muti-Media Production at the HoF, who was very friendly and helpful. Ultimately, all of the players were awesome. Even the Hall of Famers were exceptionally nice. What was really cool was that Rickey Henderson said these words to me: "Keep it up, Matt. You are doing a great job." That really warmed my heart. Note that I'm going to be posting all of the video interviews in future blog posts. 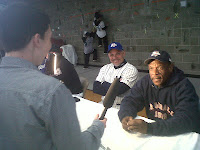 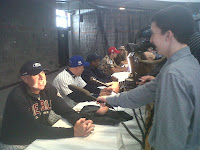 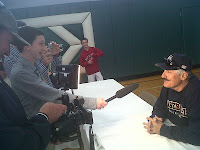 After the interviews, it was time for a meet and greet at the Hall of Fame for the fans to meet the players. I actually got a knuckles fist bump from Phil Niekro (also known as "Knucksie"), which was awesome, considering he is famous for his knuckleball. I also got in some trivia in a game of "So You Think You Know Baseball", which was hosted by Jamilyn. The questions were surprisingly hard and I had trouble with a lot of them. I also got to speak with Cox and Gaston personally and asked each of them a couple of questions. They were both really nice and I'm glad I got to talk to them. As you may know, Gaston managed the winning team in my favorite World Series, the 1993 Jays-Phillies one. 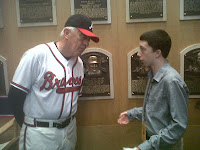 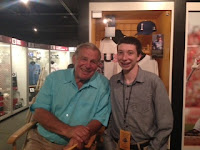 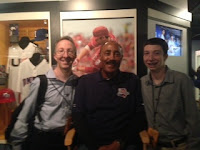 At about four o'clock, my dad and I went to Sal's Pizzeria. While I was eating, a kid named Nick Dennison and his father came over to me, and Nick asked to take a picture with me. I didn't know why he wanted to take a picture with me, but he told me that he recognized me from my appearance on MLB Hot Stove. My first actual fan! Nick was super cool and I can't thank him enough for being the first person to recognize me. Here's a picture of us. 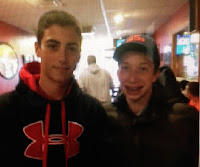 After a quick pit stop at the Cooper Inn, the bed and breakfast where my dad and I were staying, we went to the Cooperstown Diner for some grilled cheese and I got recognized again!! I was in such shock, but it was so cool. After dinner, it was off to the Hall once again for a Night at the Museum, where I got to talk some more with Rickey and Goose and took a picture with them and my dad. I got in some more trivia afterwards and, wouldn't you know it, I got recognized for a third time! What a CRAZY, FANTASTIC, AMAZING weekend! 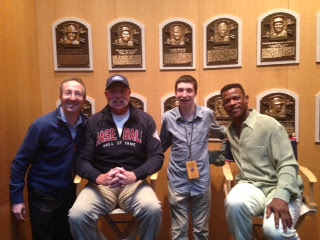 Overall, I loved my experience at the Hall of Fame. Although the game was cancelled, it was awesome  meeting all of the former players, managers, and Hall of Famers. I hope that I can go again next year, but I will have to see.

Well, thanks for reading this post and I hoped you enjoyed it. I hope that anyone who went to Cooperstown enjoyed their time there as much as I did, and check back in a couple of days for more of "all the buzz on what wuzz."