Today I have something a little different to share with you. As you know, I am a teenager and, as a teenager, I enjoy playing video games. There is this one video game on the PlayStation3 called: "MLB 13: The Show", which is a realistic baseball game where you have the option to also create your own players. I actually created a guy in the game and I thought it would be fun to share it with you.

The player I created, Duke Snider III (the imaginary grandson of Dodgers legend Duke Snider) was drafted by the Brewers in the 2012 MLB Draft as a homer-hitting switch-hitting first baseman. He played the 2013 season with the Brew Crew's Double-A affiliate, the Huntsville Stars. He was brought up for the 2014 season to Milwaukee, not having to play a single game in Triple-A. In his rookie year, he had 46 homers, 112 RBIs, and batted .309 to take home the NL Rookie of the Year. He got a taste of postseason ball in 2016, in which he batted .290, hit 48 homers and drove in 138 RBIs to win the NL MVP Award and eventually won Playoffs MVP and the World Series against the Royals in seven.

After the end of that season, he was traded to the Texas Rangers. He had a great season in 2017, selected to start in his first All Star Game and winning the Home Run Derby in Cincinnati. Duke led Texas to the World Series with the help of Justin Morneau and Joe Mauer and eventually took out the Rockies in six. 2018 was a season filled with sorrow, as the Rangers lost the ALCS to the Royals, who went on to win the Fall Classic. However, in 2019, Duke had possibly his best year ever, winning the AL MVP Award, batting .336 with 50 homers and 148 RBI and won his first Silver Slugger at first base. He became the first player since Frank Robinson to win the MVP Award in both leagues. Sadly, the Rangers finished out of the playoffs.

The Rangers did not sign Snider for the 2020 season, so he became a free agent. He ended up teaming up with Stephen Strasburg, signing with the Red Sox, but the team didn't do well that year. However, Duke won his first Gold Glove at first and won the AL MVP again batting .339 with 50 homers and 153 RBIs. In 2021, the Red Sox bounced back, with Duke hitting .344 with 45 homers and 156 RBIs. Boston got to the World Series to face none other than the Brewers, who made it to the Fall Classic with the worst record for a team to make the Fall Classic in baseball history, at 80-82. Surprisingly, the Sox who were down in the Series three games to none become the first team to come back from that deficit in World Series play! And it was all because of Duke Snider III, who won Playoff and World Series MVP.

In eight seasons so far, Duke has batted .322 with 357 homers and 1,038 RBIs. His career is long from over, so he will probably get into the Hall, just like his grandpa. For now, he is on top of the world, because his team has just won the World Series! 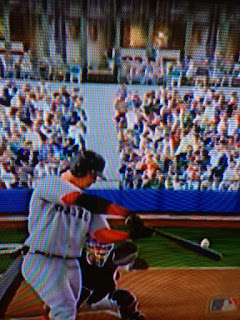 I hope you liked this different post. I had fun writing it and I hope to do at least one more in the future. Well, check back in a couple of days for more of "all the buzz on what wuzz."
Posted by Matt Nadel at 8:44 PM