An Interview with Cito Gaston and Bobby Cox 5/30/13

As you know, I just went to the Hall of Fame Classic and got to interview some of the greatest players and managers in baseball history. The two managers I briefly interviewed were Cito Gaston and Bobby Cox. Because the interviews were not filmed, I will tell you their answers to the two questions that I asked each one with a short bio about the two managers.

Bobby Cox had a short career as a player, playing from 1968-1969 with the Yankees. His love for the Yankees expands beyond the time he played with them, as he said to me that the one World Series-winning team that he would have enjoyed coaching would've been the 1927 Yankees. Cox began his managing with the Braves in '78 and continued with the team until 1982, in which he became the manager of the Blue Jays. He actually won the AL Manager of the Year Award, leading the Blue Jays to a 99-62 record, first in the AL East. That was his last year north of the border, as he became the manager of the Braves again in 1986.

As the 1990s came around, the Braves were not looking good, until they went worst to first in 1991 and won the NL pennant. They eventually lost the Fall Classic to the Twins in seven, but it was a sign of things to come. The next year, the Braves got to the big one again to face the Blue Jays, who were managed by... Cito Gaston! How funny is that? The Jays won that series, but the Braves won the '95 Series against the Indians, the first ring of Cox's career. Two more World Series losses to the Yankees in 1996 and 1999 followed, but Bobby established himself as one of the greatest managers in baseball history. Sadly, he could not manage Hank Aaron, who is Bobby's favorite Brave that he could not manage, according to Cox himself. Overall, Bobby retired in 2010 with four Manager of the Year Awards and a World Series ring. Now let me talk about the manager that Cox faced off against in the '92 Fall Classic. 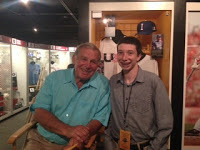 Cito Gaston as well had an 11-year career as a player, playing with Padres, Braves, and Pirates from 1967-1978 (he was in the minors for 1968), but I'm focusing more on his managing career. He became the Blue Jays manager in 1989 and took the team on a roll into the 1990s. Against Cox in the 1992 Series, the Blue Jays soared, winning the title in six. The next year, the Jays were one of the best teams in baseball, but still acted as kids. In one game, Joe Carter and two of his teammates drove out rookie Derek Bell's jeep onto the field. Bell was shocked at first but laughed when he realized it was a prank. Gaston said that he did not know it was a prank at first as well, but started laughing when he saw Carter and his teammates in the car. The Blue Jays also won the 1993 Series over the Phillies in six, making the Jays the first team to go back-to-back in the World Series since the '77-'78 Yankees and Cito couldn't be happier. After the 1997 season, Cito took a break from baseball but came back to manage the Jays from 2008 until his retirement in 2010. Gaston did say that he would enjoy taking another Jays team to the top, but he is enjoying his retirement just as much as Cox. 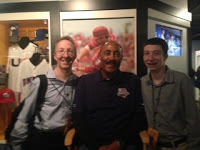 Well, I hope you liked this style of an interview. Thanks for reading it and I hope you enjoyed it. Check back in a couple of days for more of "all the buzz on what wuzz."
Posted by Matt Nadel at 8:49 PM