An Interview with Hall of Famer Fergie Jenkins 4/27/13

I have another interview for you today! It is with Hall of Fame pitcher Fergie Jenkins! If you'd like to first learn some more about the only Canadian in the Hall of Fame, just click here for a prior blog post that I did about him. So, let's get to the interview. 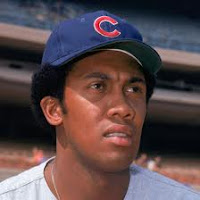 Matt: If you could go back in time to any point in baseball history, which players would you like to face?
Fergie: Two guys in particular – Stan Musial and Ted Williams. I wish I’d had a chance to face them. They were both left-handed, .300 hitters with great power. They would have presented a great challenge to me as a pitcher.

Matt: Which player was the toughest to pitch against?
Fergie: Willie McCovey was the most dangerous hitter I ever faced. He could turn on a pitch really quickly and make you look bad. The other really tough guy to face was Pete Rose. The guy got more than 4,000 hits and he made a lot of pitchers’ lives pretty difficult. Pete had a knack for working the count and finding holes in the field.

Matt: What sports did you play as a kid? What sports did you watch as a kid?
Fergie: Growing up in Canada, I liked watching and playing hockey. My first love was the Montreal Canadians – I wanted to be a defenseman. I also played a lot of baseball – my dad played semi-pro and he was pretty good – and, since I was a pretty good athlete too, I ran track and field.

Matt: Why did you start getting into baseball, considering you grew up in Canada with no Expos or Blue Jays?
Fergie: Well, like I said, my dad played semi-pro in Chatham. He was a good player and taught me a lot about the game of baseball and its history. As I got into high school, I was playing more and more, and then Gene Dziadura and Tony Lucadello found me and got me signed to my first pro contract.

Matt: Can you tell me a little bit about your foundation? Also, why did you recently start a museum?
Fergie: I started my Foundation in 1999 with the intention of giving back to charities in Canada and the United States. Baseball afforded me a lot of opportunities and I feel blessed. Starting a charitable foundation is my way of saying thanks and trying to help out people who are less fortunate, especially youths. The new museum is happening as a result of everything that I’ve collected over my life – both during my career and after I stopped playing. I’ve kept a lot of things: uniforms, autographs, memorabilia, as well as some more personal items – and this museum will give the public a chance to view and experience some of these great moments in my life.

Matt: Have you ever considered taking a coaching job with the only team in your native Canada, the Blue Jays?
Fergie: At the end of my career, there was talk about the Blue Jays considering picking me up or trading for me, but that was as a player – some people thought I could come in and help their young pitching staff; plus, I was Canadian, so that seemed like a fit. Unfortunately it didn’t happen though. They haven’t reached out to me for any coaching positions, but I’m happy to do what I do now: playing golf, hunting, fishing and doing charity work.

Matt: You are the only Canadian in the National Baseball Hall of Fame in Cooperstown, NY. Do you expect that number to increase in the future? If so, who do you think will get voted in in the future?
Fergie: The Hall of Fame is difficult to get into. It’s a very exclusive group and one that I’m proud to be a part of. Larry Walker had a great career and it’s nice that he got to spend time playing in Canada too. You’re talking about a guy who won three batting titles and an MVP. It’s really too bad that his career got cut short by injuries, because in his prime, there was no one better. He’ll get some Hall of Fame votes and it’ll be a close call. The other guy who has a chance to get in is Joey Votto. He’s young, already won an MVP and he’s a great left-handed hitter. If he continues to develop and has a long and productive career, he’ll get some Hall of Fame attention, for sure.

Matt: For your 68th birthday, Canada honored you with a postage stamp. That’s pretty cool. Were you involved in the design?
Fergie: Yes, I was. I helped develop the concept of the book of stamps looking like a baseball ticket, with some of my important stats, and then the stamp is meant to depict me not only as a ballplayer, but also as a proud Canadian and humanitarian. 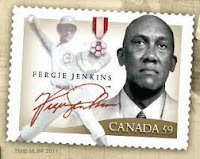 Matt: The Cubs retired your jersey number 31 in honor of you and Greg Maddux. Did you ever give Greg advice during his career?
Fergie: Unfortunately, I never really got to talk pitching with Greg while he was still playing, but there’s no doubt, he was an incredible pitcher and it’s nice to be mentioned alongside a great player like him.

Matt: I read that you improved your pitching skills by throwing pieces of coal. Do you recommend that for pitchers today?
Fergie: Throwing coal between the rail cars was just a way for me to work on developing my stamina and accuracy. That’s what I would tell young pitchers today – work on throwing strikes, being a good athlete and working with what you’ve got. There are all kinds of different throwing programs out there and, to be honest, I never really got into weightlifting either. I was more interested in developing my stamina, flexibility, endurance and control.

Matt: You were a member of the Harlem Globetrotters basketball team from 1967 to 1969. What was your best shot?
Fergie: I was a jump-shooter. The other guys like Meadowlark Lemon and Curly Neal ran the fast breaks, but I was more of a jump shooter, which goes back to my basketball playing days in high school. Also, the guys involved me in some baseball-related skits on the floor – all as part of the tricks and entertainment we did – which was pretty fun and successful, too.

Well, that's the interview. I hope you really enjoyed it and thanks for reading it. Thanks to Mike Treadgold and Jillian at the Foundation for helping to set it up, and a special shout-out to Fergie Jenkins for agreeing to do it and for giving such great answers. Check back in a couple of days for more of "all the buzz on what wuzz."
Posted by Matt Nadel at 2:38 PM