An Interview with Hall of Famer Jim Palmer 9/4/12

Today is my 50th blog post and I will be blogging about a pitcher named Jim Palmer. He is actually in the Hall of Fame (here's the actual Hall of Fame list and his Hall of Fame page), and I got to interview him! But before I get to the actual interview, let me tell you all a little bit about Jim Palmer's career first:

Not only was Jim an awesome player, but he has been a great baseball broadcaster for many years.  And he also supports many important charities, including charities that provide funds for services, resources and education to improve the lives of individuals with autism spectrum disorders and their families like the Autism Project of Palm Beach County (just click on this link for more information or if you want to make a donation). 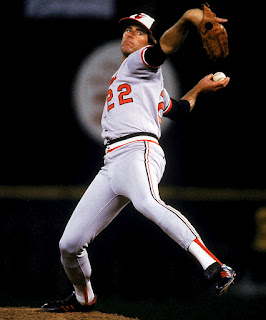 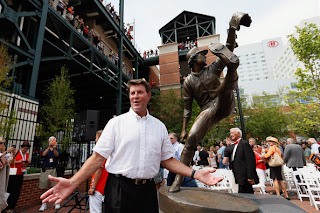 Is there really even any wonder why the Orioles recently put up a statue for him (see picture)? Anyway, you'll find out more about this pancake-eating pitcher in the interview below, so before I give you too much more information, here is the interview straight from the Oriole's mouth:

Matt: You pitched for 19 seasons, but you never ever gave up a grand slam in 213 bases loaded situations (and by the way only 8.9% of the home runs you gave up were with two men on base).  What was your secret?
Jim: I would always throw fastballs in those situations because you have better command over a fastball than a breaking pitch. So I would try to get the hitters looking by pitching in the corners of the strike zone. I did walk 13 batters though.

Matt:  I understand that one of your big hobbies is gardening. How did you get into it? Have you ever given any tips to the Camden Yards groundskeepers?
Jim: Well, when I was in the Baltimore farm system, one of my managers was Cal Ripken Sr. He told me to have a good work ethic and to have order in life. So I thought, 'What better way to exercise that idea than to start a garden?' And no, I have not given advice to the groundskeepers at Camden Yards. They're my buddies.

Matt: Since this is a baseball history blog, if you could've pitched for any other team in baseball history, who would it have been and why? And what batters in history would you have like to have faced?
Jim: I would have played for the Yankees in the 1950s because one, I grew up in New York, and two, I would've gotten to play with Mickey Mantle, Yogi Berra, Whitey Ford, and the rest of those pennant winning squads. As a pitcher, I think it would have been fun to have faced Babe Ruth, Lou Gehrig, Stan Musial, and Ted Williams. Fyi,  I actually beat the Yankees 30 times during my career.

Matt: During the 1971 season when four pitchers on the Orioles had 20 wins (including you), did you guys compete to see who would get to 20 wins first?
Jim: No, we didn't. The four of us just wanted to get to 20 wins. We didn't care who got there first.

Matt: What should MLB be doing about getting young fans more interested in baseball history?
Jim: They should get kids to read more baseball history books. Roger Kahn was a really good writer. He wrote that book about the Dodgers in the '40s and '50s called "The Boys of Summer". What MLB could also do is teach kids baseball in school subjects. Like in math, how to calculate slugging percentage, or batting average. And in geography, where did teams used to play, and where do they play now.

Matt: Did you have any regrets as a player?
Jim: None, because when I played with the O's, we were the best team in baseball. I went to the right team, we had six All-Stars, a number of Hall of Fame players and manager. Plus, Baltimore loved us, especially when the Colts moved to Indianapolis.

Matt: Which year did you feel you were most unbeatable when you were on the mound and why?
Jim: 1975, because I pitched ten shutouts, had 23 wins, my earned run average was 2.09, and I won the Cy Young Award.

Matt: Do you hang out with any other Hall of Famers and, if so, who? When Hall of Famers get together, do they talk about anything besides baseball?
Jim: Dennis Eckersley and I are good buddies. Yes, we do talk about baseball, but also our families, golf, and even sometimes the Real Housewives of Orange County. [Note from Matt: By the way, Dennis Eckersely and another famous Oriole, Cal Ripken Jr., are both on Baseball with Matt's Dream Team, in case you didn't know. Hopefully, one day I will be able to interview them too.]

Matt:  Who was the toughest hitters you ever pitched against?
Jim: Probably Rod Carew. He would always hang in there, and right when I was about to get him, he would hit a single. Also, Roberto Clemente was very hard to pitch to. I only pitched to him a couple of times in the World Series, but he had the same characteristic as Carew. Right when I had him down 0-2, he would get a hit into the outfield gap.

Matt: You were known for eating pancakes before games.  Why? How do you like them prepared?
Jim: When we won the World Series in 1966, every time I ate pancakes before a game, we won. That's how I got my nickname "Cakes". I like buckwheat pancakes or just regular. Once I had blueberry pancakes in Boston and we scored 17 runs.

Thanks again to the great Hall of Famer Jim Palmer, for being such a great sport.  I had so many questions for him, that we actually had to do the interview over two days.  I wish his O's the best in the playoffs, even though I know the Yanks will beat them in the end.

And if there any other baseball players out there who are reading or hearing about my blog and want to be interviewed (by phone or email), please contact me at mattamdad@gmail.com.

Finally, Baseball with Matt is now on Twitter. So if you want to follow my blog and do some tweeting, just go to @BaseballwMatt.