Like I promised, here's the first blog in Baseball with Matt history about a NL player:

Every year, it was basically a 25% chance that the Yankees and Dodgers would meet each other in the World Series in the late '50s, early '60s. However, one pitcher and one pitcher alone on the St. Louis Cardinals, helped the Redbirds to becoming a NL powerhouse. His name was Gibby, Bob Gibson. From 1959 to 1975, Gibby won 251 games and helped the Cards to three pennants and two World championships ( the championships coming in '64 and '67). He is a Hall of Famer and one of the only pitchers to win an MVP award and Cy Young award in the same season (1968). Bob Gibson was good, but if their was inter league play back then, I think a couple Minnesota ballplayers would have owned him. 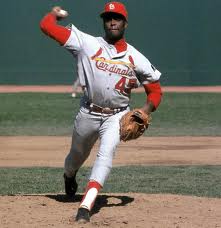