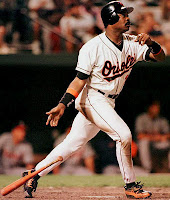 When a scout looks at a high school prospect, they look for 5 tools: hitting for average, power, speed, throwing ability, and fielding ability. Eddie Murray was a five-tool guy. His career with mainly the Orioles from 1977-1997, is probably one of the most underrated careers of all time. Steady Eddie had 3255 hits, good for 12th on the all-time list. The funny thing is, he wasn't really considered a power hitter. However, he has the second-most home runs in a career by a switch-hitter, only behind Mickey Mantle, with 504, 25th on the all-time list. Fun Fact: Murray is the only baseball player to never hit over 35 dinggers in a season, but still have over 500 career homers, and to never have 200+  hits in a season, but still have at least 3000 career hits. He may have been underrated, but he had one of the best offensive careers in baseball history.
Posted by Matt Nadel at 7:22 PM