Matt N here with your next blog. Considering I started from the beginning of the baseball era, I'll stay in chronological order for now:

As I said before, Babe Ruth ended the Dead Ball Era with 714 homers, the most before Hank Aaron and Barry Bonds (they'll come up later). But who competed against him for the home run crown every season? I'll give you one hint: He hit 534 career dinggers, Jimmie Foxx! The Beast (as he was called) won the MVP 3 times in the AL. He played for 20 years from 1925-45, mainly with the Philadelphia Athletics and the Boston Red Sox. Another important fact was that he also won 2 World Series in 1929 and 1930 with the A's. Some match for the Babe to put up with! 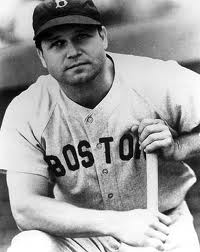