Thanks for giving me so many views. I really appreciate your support. Anyway, here's my next blog:

The Big Red Machine was the nickname for the Cincinnati Reds during the '70s and early '80s because they had such a great team. Well, there was another machine in the central United States; a hit machine: Robin Yount! Yount was hitting off all pitchers in the AL for the Brewers from 1974-1993 (the Brew Crew moved to the NL in '98). He had 3142 career hits, good for 17th on the all-time list. That's not all he did, though. He won 2 MVP awards, in '82 and '89. Also, his career batting average was .285. Some competition for Dave Winfield and Rickey Henderson! 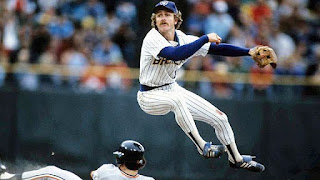