In honor of Philip Humber pitching a perfecto yesterday, I want to blog about a very strange ALMOST-perfect game. I'll talk about the Orioles next time:

Harvey Haddix, of the Pittsburgh Pirates, was nothing special, but on one day, he happened to just be a pitcher who pitched a perfect game through 12 innings, but gave it up in the 13th. It was May 26th, 1959, Pirates vs. Braves. Haddix was pitching masterfully through 9 innings, not giving up a hit, walk, or error. However, the opposing pitcher, Lew Burdette, held the Pirates scoreless through nine, too. So into extras it went, tied 0-0. After 12 innings, still tied 0-0, and still, Haddix was pitching a perfect game. In the bottom of the 13th, an error by Don Hoak of the Pirates allowed Felix Mantilla to reach first, ending the perfect game, but the no-hitter was still in tact.  After a sacrifice bunt and an intentional walk to Hank Aaron, Joe Adcock hit an apparent home run, ending the no-hitter and the game. However, in all the confusion, Aaron left the base paths and was passed by Adcock for the second out and the Braves won 2-0. Eventually, the hit was changed to a double by the ruling of NL president, Warren Giles; only Mantilla's run counted, for a final score of 1-0, but Haddix still lost. Although Haddix lost, it is considered by many to be the best pitching performance ever. 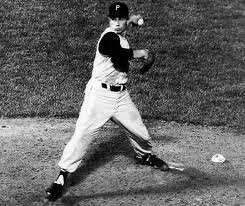