This is my second blog today. The only reason I'm blogging a second time today is because of what day it is:

65 years ago today, in Ebbets Field in Brooklyn, NY, Jackie Robinson became the first African-American baseball player to ever play the sport professionally. He broke the color barrier for baseball, and since then, African-Americans have flourished in the MLB. But today, I wanted to talk about the person who started it all:

Jackie Robinson, from 1947-1956, prospered for the Brooklyn Dodgers. He had a lifetime batting average of .311, and helped the Dodgers win a World Series in 1955. He also won the MVP Award in 1949. Jackie may not have been treated so nicely because of the color of his skin, but he made an impact on baseball and the world. 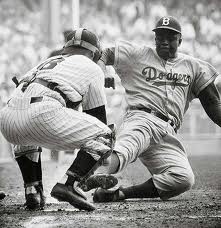