A lot of people ask me what the first MLB game I ever watched was. Well, I don't remember which game, but I do remember which series: the 2007 American League Division Series between the New York Yankees and the Cleveland Indians.

The 2007 World Series would eventually be won by the Boston Red Sox, but the New York Yankees were actually the team to win the AL Wild Card with 94 wins. The Indians, meanwhile, won the AL Central with a record of 96-66. Because of the records of the playoff teams, the Yanks and the Tribe met in the first round of the postseason.

The 2007 ALDS was pretty uneventful, as Cleveland beat New York in four games in a best-of-five series, but there was one incident that will stand out to me forever: the Bug Game. Basically, Game Two of the series went into extras and Joba Chamberlain, who was pitching for the Yankees as a reliever in the additional innings, was attacked by a swarm of tiny insects. Play was stopped, but Joba ended up getting a blown save because of the biting creatures. It was an odd circumstance but still a memorable one. 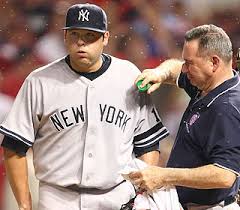 Even though my team lost the series, I still began to follow the Yankees and have loved them ever since. So, in conclusion, thank you tiny insects for making me find my passion. Anyway I hope you enjoyed this post and thanks for reading it. Check back soon for more of "all the buzz on what wuzz."
Posted by Matt Nadel at 9:17 AM