I'm sure many of you have heard of Jim Rice, the Hall of Fame slugger who played for the Boston Red Sox for 16 seasons, but just like Robinson and Collins, multiple Hall of Famers have the last name "Rice." Who is the other Rice, you ask? Easy: Sam Rice. 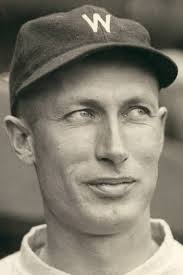 Sam Rice played for the Washington Senators (the present-day Twins) and Cleveland Indians from 1915-1934. Just like Babe Ruth, Rice debuted in Major League Baseball as a relief pitcher, but transitioned over to right field permanently two years into his career and boy, what a career move! He batted .322 lifetime with 2,987 base hits, 1,514 runs, and 184 triples. Rice was also an excellent fielder, finishing near the league lead in outfield putouts and assists numerous times. Despite him playing for the Washington Senators, a very bad team for a very long time, Rice actually led the Sens to three pennants: 1924, 1925, and 1933. Rice put up okay numbers in the '24 and '33 Series, but he really shined in the 1925 Fall Classic against the Pirates. He batted .364 with 12 hits and five runs scored in the seven games.

But his most famous moment in the Series and perhaps in his entire career came in the bottom of the eighth of Game Three in Washington, D.C. with the Senators up, 4-3. With two outs, Pittsburgh's catcher Earl Smith came to bat and hit a long and high drive to deep right-center field. Rice, who was playing in right field at the time, spectacularly caught the ball right before the wall, but then tumbled over the fence and into the stands, disappearing from the view of the umpires. When he returned onto the field, he had the ball in his hand and Smith was called out. The play was very controversial and remained so until Rice's death in 1974, when it was revealed in a letter addressed to the Hall of Fame that he did in fact catch the ball. Still, it's one of the most talked-about and disputed-over plays in baseball history. Unlike Willie Mays' catch (see picture below), there's no film of Rice's catch. 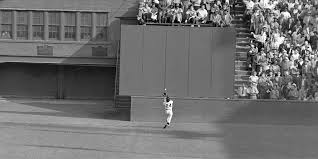 So, Rice said he made the catch, but what do you think? Do you believe this Hall of Famer or do you think he's not telling the truth? Let me know in the comments down below. Thanks for reading this post and I hope you enjoyed it. Check back soon for more of "all the buzz on what wuzz."
Posted by Matt Nadel at 11:05 AM