Hey Guys!
Happy Opening Day number two! This next blog is the first blog about a pitcher in Baseball With Matt history:

Have you ever heard of Cy Young, perhaps the greatest pitcher in the history of baseball? Well, the second best would probably be Walter Johnson. Johnson pitched from 1907-1927 for the Washington Senators. He won an amazing 417 games and helped the Senators to Washington's only World Series championship in 1924. He was one of the first five players elected to the Hall of Fame in 1936. Maybe, in each league, there should be a Walter Johnson award for the second best pitcher in each league and the best pitcher in each league would be awarded the Cy Young award! How funny would that be! 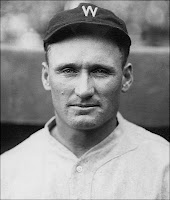