Number Five: Rich Gossage
Why? "Goose" Gossage, with his classic horseshoe mustache, was always a danger to batters when he stepped to the mound as a reliever. He was known for his mustache, but couldn't grow it out a lot until he left the Yankees because of George Steinbrenner's "no facial hair" rule. 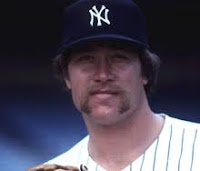 Number Four: Bruce Sutter
Why? The reliever elected into the Hall in 2006 had an awesome beard/sideburns combo. He is probably the Hall of Famer with the most facial hair on his Hall of Fame plaque. 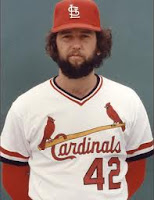 Number Three: Mike Schmidt
Why? The slick-fielding and power-hitting Phillies third baseman had one of the best mustaches in baseball history. Philly fans loved it. For some of 1980, the year the Phillies won their first World Series, Schmidt was rockin' a mustache/beard combo. Later in his career, he shaved his famous mustache and grew out his sideburns. Don't worry, the Philly Facial Hair was back when he made his Hall of Fame induction speech in '95. 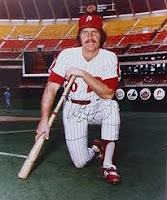 Number Two: Dennis Eckersley
Why? His mustache was very famous and was well-known around the MLB in the 1980s. What was even more famous was his long, flowing hair. Michael Kay, the announcer for the Yankees, said that he liked Eck's hair more than his mustache. Either way, the famous A's closer had some of the best facial hair in baseball history.

Number One: Rollie Fingers
Why? The Hall of Fame closer for the A's and Brew Crew is in the top spot on this list because his mustache is not only great, but famous. I have to give his barber shop-looking mustache some props for inspiring many baseball fans all over the country to grow this distinct mustache. 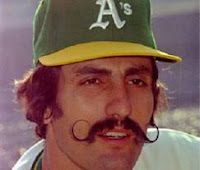