The National League East has been a very unpredictable division over the past several years; every team in the NL East has won the division at least once since 2006, except for one team: the Florida/Miami Marlins. Although the Marlins haven't been super great for the last decade, I want to tell you a little about this fairly young baseball team.

The Florida Marlins played their first season in the MLB in 1993. The marlin is the most popular deep water fish in Florida, which was one of the reasons why then-Marlins' owner, Wayne Huizenga, chose the name for the first MLB team in Florida. When they were known as the Florida Marlins (yes, they were renamed, but that will be explained later), they played in the same stadium as the NFL's Miami Dolphins. The stadium went through several name changes, but most people recognize it by its formal name, Joe Robbie Stadium.

The Marlins didn't experience immediate success, but they got their first ticket to the playoffs in 1997 as the NL Wild Card team with 92 wins. After beating the Giants and Braves in the NL playoffs, Florida became the fastest expansion team up to that point to reach the World Series (the Diamondbacks would break that record in 2001). There, the Fish (as the team is nicknamed) faced the powerful Cleveland Indians. Surprisingly, the Marlins actually won that Fall Classic in seven games. The seventh game was very dramatic, as it was won on a walk-off single by Edgar Renteria in the bottom of the eleventh inning.

1998 was a hard year for the Marlins and their fans, as the team couldn't keep most of their players from the 1997 squad due to financial problems. Because of this, they posted the worst record for any team that had just come off of winning a World Series, with 108 losses. They experienced a couple more subpar seasons, but they turned it around in 2003. With the help of star hitters like Ivan Rodriguez and Mike Lowell and star pitchers like A.J. Burnett and Josh Beckett, the Marlins won the NL Wild Card race again and eventually reached the World Series to face the Yankees. Again the underdogs, the Marlins shocked baseball when they beat New York in six games. 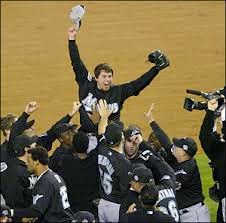 After 2003, the Marlins have not had any more exciting treks through the playoffs, but something exciting did happen to the team after the 2011 season: they relocated! The Florida Marlins were renamed the Miami Marlins, moved into their new park, Marlins Park, and switched their teal uniforms for orange uniforms. Miami has not experienced playoff baseball in their new stadium, but they probably will in the near future.

Here's another fun fact about the Marlins: Triple Crown winner Miguel Cabrera of the Detroit Tigers actually started his career with the Marlins in 2003. He played with the team until 2007! Anyway, thanks for reading this post. I hope you enjoyed it and check back soon for more of "all the buzz on what wuzz."