I'm going to stick to the theme from my last post and talk about some more no-hitters. To be more specific, I'm going to talk about the most recent pitcher to throw a no-no in the playoffs: Roy Halladay!

No-Hitter Number One: Phillies vs. Marlins
When? May 29th, 2010
Where? Sun Life Stadium
What Happened? Halladay had an incredible day on the mound for the first place Phillies, striking out eleven and not allowing a single man to reach base in the 20th perfect game ever pitched in MLB history. It was the second perfect game thrown in the MLB in 20 days (Dallas Braden of the A's threw a perfecto on May 9th, 2010), but it was the first National League perfect game thrown since Randy Johnson in 2004. It was also the tenth no-hitter pitched in Phillies history and the second perfecto thrown by a Phillie in the history of the franchise. The only run of the game was an error made by Marlins center fielder Cameron Maybin in the top of the third, which allowed Phillies shortstop Wilson Valdez to score in a 1-0 Philadelphia win.

No-Hitter Number Two: Reds vs. Phillies
When? October 6th, 2010
Where? Citizens Bank Park
What Happened? Had Doc not walked Jay Bruce in the top of the fifth inning in this game, Halladay could have pitched the second perfect game in the history of the MLB postseason! But alas, he "only" pitched a no-hitter, the first one in postseason play since Don Larsen of the Yankees in the '56 World Series. The final out was made on a Brandon Phillips dribbler just in front of the plate, which was scooped up by catcher Carlos Ruiz and thrown to first baseman Ryan Howard to secure Roy Halladay's first postseason appearance and victory and a 4-0 win in Game One of the 2010 NLDS. The Phillies went on to win this playoff series against Cinci, but eventually lost to the Giants in the NLCS. 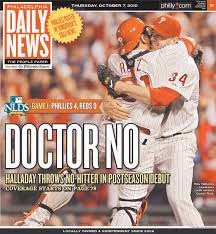 In case you didn't notice, Halladay's no-no's were pitched in the same year. He became just the fifth man to ever accomplish that feat. Anyway, thanks for reading this post. I hope you enjoyed it and check back soon for more of "all the buzz on what wuzz."
Posted by Matt Nadel at 9:48 PM