Today, I feel like talking about Sandy Koufax, but I don't want to talk about him in general. Today's post is going to be about all four of the Left Arm of God's no-hitters.

No-Hitter Number One: Mets vs. Dodgers
When? June 30th, 1962
Where? Dodger Stadium
What Happened? Koufax walks just four batters while collecting a whopping 13 strikeouts in a 5-0 Dodger win. The Dodger offense is led by right fielder Frank Howard, who homers and drives in two in the victory.

No-Hitter Number Two: Giants vs. Dodgers
When? May 11th, 1963
Where? Dodger Stadium
What Happened? Facing rival pitcher Juan Marichal, Koufax only strikes out four, but walks just a single batter in an 8-0 destroying of San Francisco. Ron Fairly brings home three runs and Wally Moon homers in another two, helping Los Angeles get to 16-15 on the young season. 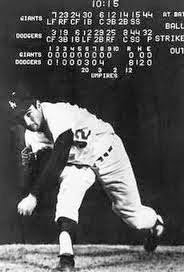 No-Hitter Number Three: Dodgers vs. Phillies
When? June 4th, 1964
Where? Connie Mack Stadium (in Philadelphia)
What Happened? Again, Sandy only walks a single batter, but this time strikes out 13 batters. Frank Howard hits a three-run shot for the only runs of the game in a 3-0 win for LA.

No-Hitter Number Four: Cubs vs. Dodgers
When? September 9th, 1965
Where? Dodger Stadium
What Happened? In arguably his best pitching performance of his entire career, Koufax strikes out 14, walking no one. This is the first and only perfect game that he ever pitched in the Bigs. The only Dodger hit was a Lou Johnson double in the fifth. He then proceeded to steal third and then scored the only run on an error. It was definitely a close contest, as both pitchers pitched amazingly in this 1-0 game, but it was Koufax who got the perfect game. This may have been the lowest combined WHIP ever by two pitchers in one game in MLB history, as Sandy had a zero WHIP and the other pitcher, Bob Hendley, gave up just one hit and one walk over eight innings, for a WHIP of 0.25!! 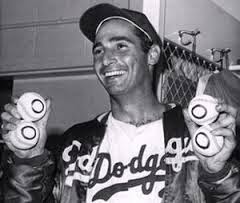 Fun fact: in case you didn't notice, all four of Sandy's no-no's were in consecutive seasons. Now, that's what I call consistent. Anyway, thanks for reading this post. I hope you enjoyed it and check back soon for more of "all the buzz on what wuzz."