Today is a really special anniversary for Tigers fans: it's the 40th anniversary of Al Kaline's 3,000th career hit! Who is Al Kaline, you ask? Well, I am about to tell you.

Al "Mr. Tiger" Kaline played his entire 22-year career with the Detroit Tigers from 1953-1974. Kaline could definitely hit for power, smashing 399 career home runs, but he was more so a contact hitter, and a good one, too. Averaging about 137 hits per year, Mr. Tiger collected 3,007 career base hits, 27th on the all-time list. He led all of Major League Baseball in hits (200) and batting average (.340) in 1955 at the age of 20, becoming the youngest man to win a batting title, a record that he still holds.

The 18-time All Star who batted .297 lifetime is also known for his glove. He won the Gold Glove Award as an outfielder ten times, seven of them consecutive from 1961-1967. Despite all of this regular season greatness, Kaline appeared in just one World Series during his playing days (and the Tigers won that Series), but boy, did he have a fine 1968 Fall Classic against the Cardinals: .379 batting average, 11 hits, a pair of homers, and eight RBIs in seven games. 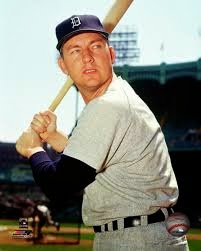 As I mentioned before, on this date in 1974, Al got hit number 3,000 of his career against Dave McNally in a 5-4 Detroit loss to the Baltimore Orioles in the Charm City. Six years later, Mr. Tiger was elected into the Baseball Hall of Fame in Cooperstown, New York, receiving 88.3% of the vote.

Anyway, thanks for reading this post. I hope you enjoyed it and check back soon for more of "all the buzz on what wuzz."