I recently had the chance to interview President and CEO of the Arizona Diamondbacks, Derrick Hall! Derrick was a really nice guy and I want to show you what answers he gave in response to my questions. But before I get to that, let me tell you a little bit about Derrick.

Derrick graduated college from Arizona State University with a bachelor's degree in broadcasting and journalism and received a master's degree from Ohio State University in sports administration. He has been the Dback's President since 2006 and CEO since 2009.  Hall has helped Arizona to two division titles (2007 and 2011). The 2011 NL West division title was a 29-game turnaround from the previous year, with new manager Kirk Gibson winning NL Manager of the Year and new General Manager Kevin Towers coming in third in the voting for Executive of the Year. Both men were hired by Derrick before the 2011 campaign. Not only has Hall made significant improvements to Chase Field, home of the Dbacks, but he has also influenced the Diamondbacks franchise to be a lot more charitable. Overall, things have been looking up for Arizona since Hall became the President and CEO.

Well, that's just a little bit about Mr. Derrick Hall. Now, let's get to the interview.

Matt: What sports did you play/watch as a kid?
Derrick: I played baseball, basketball and tennis as a kid and watched the Dodgers all the time on TV during the '70s.

Matt: What made you decide to hire Kirk Gibson and Kevin Towers as manager and GM prior to the 2011 season?
Derrick: Well, Towers was selected because of his experience in the game of baseball and Kirk had three months as interim manager during the 2010 season and Towers wanted him as manager. So, Kevin informed me of his decision and I hired Kirk. 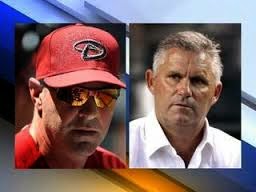 Matt: Would you consider installing a slide to Chase Field's pool? If so, what would you name it?
Derrick: I would definitely consider it. I would want it to be full of twists and turns like a snake, so maybe  "The Snake Charmer."

Matt: Besides Luis Gonzalez's walk-off single in Game Seven of the 2001 World Series, what is the greatest moment in Diamondbacks' history?
Derrick: I would say Randy Johnson's perfect game in Atlanta in 2004. It was a very good game to watch and I was amazed how he was able to do it. 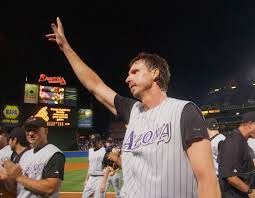 Matt: If you had the chance, which Hall of Famer would you add the the Arizona Diamondbacks' roster?
Derrick: Probably Sandy Koufax because a team is only as good as its starting pitching.

Well, that's the interview. Thanks to Derrick Hall for answering my questions. I hope you enjoyed this interview and thanks for reading it. Check back in a few days for more of "all the buzz on what wuzz."